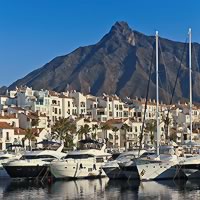 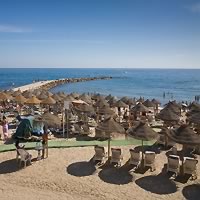 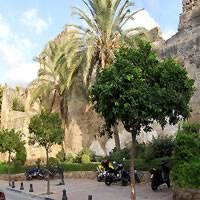 More details
Enjoy picturesque Spain with this vacation package, begin with a stay in beautiful Seville (fragrant orange blossoms and the passion of the Flamenco waft through the air) then visit Granada (with a strong artistic and cultural heritage; Moorish and Christian details dominate the city) and finally Marbella (typically Andalucian with whitewashed houses, beautiful beaches and countless attractions set on the Costa del Sol). A rental car allows you to take your vacation into your own hands! This is a flexible vacation package. Select your number of nights in each city, desired hotel and activities.;
Included:
6 nights from $1,527*

Close more details
Venture through Spain and visit those lovely cities. Start your adventure in Madrid (knows for The Center of All The Roads in Spain. On top of that, the square is also the point where all of Spain's six major roads start), continue to Toledo ("the Imperial City" and the "City of the Three Cultures" for the cultural influences of Christians, Muslims and Jews reflected in its history), next Granada (The long-time capital of Moorish Andalusia has to offer the most important reminds of this epoch in Spanish history, with the world-famous "Alhambra" at the top of the list), Marbella ( One of the best-known resorts on the Costa del Sol. Its beaches, night clubs and luxury venues are famous the world over) and finally end this journey in Sevilla (famous worldwide for its culture, monuments, traditions and artistic heritage. This is the birthplace of Flamenco and the city where the most amazing Easter processions take place). Travel between these cities with a rental car. This is a flexible package. Select your number of nights in each city, desired hotel and activities. ;
Included:

Close more details
This self-drive vacation package lets you set the rules! Sample some of Spain`s most popular cities. Visit exciting Barcelona, then pick up your car and drive to Valencia and to Alicante on the Mediterranean continue to Granada and the Alhambra and then sample the Costa del Sol with a stay in Marbella, proceed to beautiful Seville. Drop your car there on arrival and finally catch the Ave train for a visit to artistic Madrid. With yourself in the driver`s seat you can choose which museums, churches, historic sights, beaches and more that spark your interest, for ultimate control of your vacation. This is a flexible vacation package. Select your number of nights in each city, rental car, desired hotel and activities.;
Included:
13 nights from $2,139*

OR
Loading...Please wait
Feedback from our travelers
4.7 out of 5 stars