Welcome to Croatia! Upon arrival, you will go through customs and immigration. Should you opt to purchase a transfer to your hotel, a representative will be waiting for you as you exit immigration. Otherwise, make your way to Šibenik and arrive at your hotel. Check in and do not give in to jet lag! There is so much for you to see and do!

Welcome to Šibenik, the oldest Croatian settlement on the shores of the Adriatic. You will immediately get a feel for the long and storied history of the area when you visit St. Michael`s Fortress, located just 600 feet north of the center of town. Overlooking the city, the current fortress dates from the early Renaissance era and Venetian rule, but defenses have been located on the site since the Iron Age (the five centuries before the Common Era). Afterwards, walk back to town and get acquainted with the historic center, called `Grad` (city, short for `Krešimir`s City`, as King Petar Krešimir IV`s seat of government was based here during his reign in the 11th century).

A great place to start is Republic of Croatia Square, the main square in Šibenik. It is on the western end of Grad, right next to the waterfront. The most-visited landmark in the city is located on the square, the UNESCO World Heritage-listed Cathedral of St. James. The cathedral is built entirely of local limestone and marble, and took seven different architects and sculptors over 100 years (1431-1536) to construct and perfect. It is considered the best example of Renaissance architecture to be found in Croatia. Another Renaissance-era structure on the square, just across from the Cathedral, is the city hall, considered to be one of the more architecturally significant city hall buildings in Croatia, with its cloistered ground floor.

Also on the square, you will find the Rector`s Palace, the largest defensive structure located on the city`s coastline. It served as the house of the head of local government (the rector) and features two guard towers, one shaped like a rectangle and one like a polygon, and a `sea gate` where, once upon a time, visitors arriving by boat passed through to enter town. It is now the home of the Šibenik City Museum. Next door you will find the Ecclesiastical Museum of St. Barbara, built in the Gothic style in the early 15th century, as well as Aquarium Terrarium Šibenik, the largest aquarium in northern Dalmatia.

Head north from Republic of Croatia Square, up Ulica Andrije Kacica Miošica, to Four Wells Square. During the time of the Venetians, Šibenik had to have their drinking and bathing water piped in by viaduct, and this square was the only place outside the walled portion of Grad that received water. There are a number of cafés, bars and restaurants in the area, in particular along the waterfront, which you can access by walking back to the square and around the northern end of the cathedral. Return to your accommodations at the end of the evening. 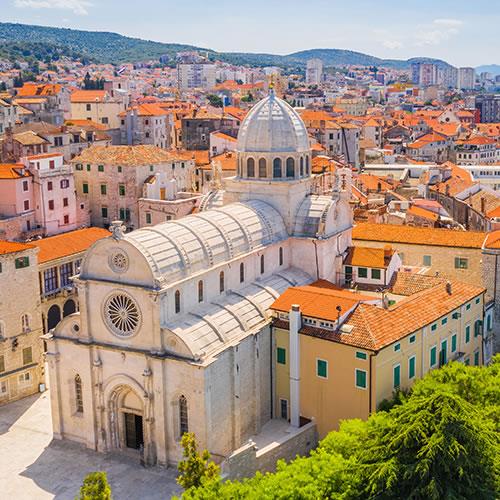 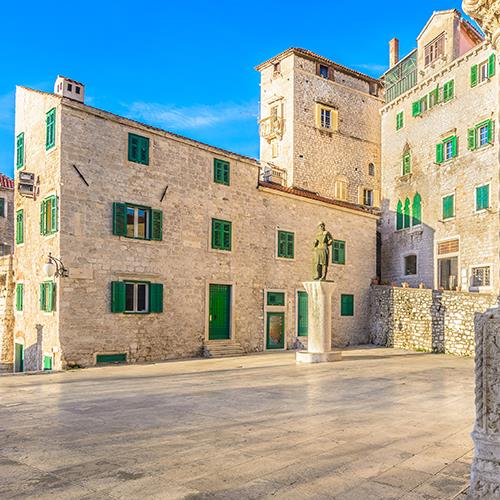 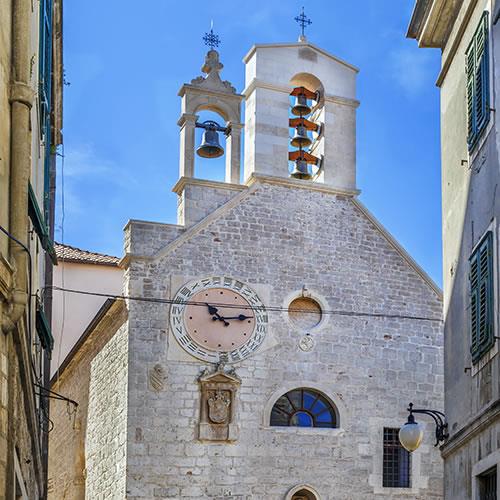 Wake up early in the morning and head for the ferry port. It`s located to the east of town, between the city park and the city`s free parking lot and Šibenik train station. Buy tickets for a fast tour of St. Nicholas Fortress, another UNESCO World Heritage Site. After being named to the list in 2017, it closed for renovations, but it was reopened to the public in July 2019. The island is connected to the mainland by a small foot path surrounded by the St. Anthony Channel. Near the beginning of the foot path, there is an intimately-situated beach, St. Nicholas Beach. If you purchase a tour from one of the vendors at the ferry port, it should last between one and two hours and will allow for some free time to view your surroundings. Once you return to the mainland, go to the city park, where you will see a statue of King Petar Krešimir IV, who founded Šibenik on Christmas Day 1066. On the northwestern end of the park, explore the sacred art at the museum housed inside the 14th-century Church and Monastery of St. Francis.

At this point, you have already seen two of the four fortresses that guarded Šibenik during the time of the Venetians. North-northwest of the park and the Church of St. Francis by about 1/3 of a mile, you will visit another one, the 17th-century Barone Fortress. Along with the neighboring fortress, St. John`s Fortress, they were built during the same two-year time span and were evidence of Venice`s military might during this time. Both of these fortresses played a key role in defending Šibenik during the Cretan War against the Ottomans. Afterwards, go to St. John`s Fortress, considered the strongest fortification protecting the city, and also the one built on the highest hill, which gives great views of the city below. It is situated about 900 feet away from Barone Fortress, connected by the road Put tvrdavama.

Before the sun sets, head back down into town and visit the St. Lawrence Church and Monastery, with its famed Medieval Mediterranean-style garden, the only garden of its kind left in Croatia. The garden will be a great place to enjoy the sunset and take some Instagram-worthy photos so you can show people how much fun you are having on your Šibenik vacation. Go back to the waterfront for dinner and return to your accommodations at the end of the evening. 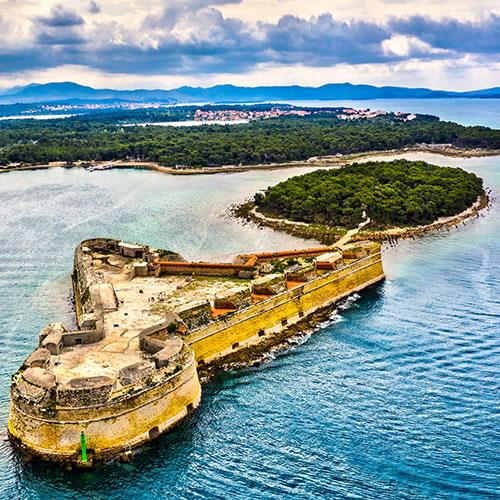 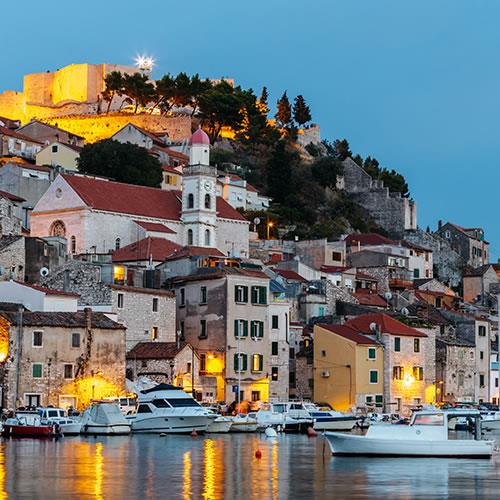 If you have an extra day in the area, head north of town to Krka National Park, which is about a 20-minute car ride away. The heavily forested park surrounds Visovac Lake, a ria on the Krka River which flows into St. Anthony Channel. There is an island in the middle of the lake, also called Visovac, which is home to a Serbian Orthodox monastery. The most popular and majestic sights inside Krka National Park are the waterfalls, in particular the picture-perfect Skradinski buk, consisting of three stages of waterfalls cascading down one another, and Roški slap, a waterfall nearly a quarter-mile in width which can be viewed from a nearby bridge. 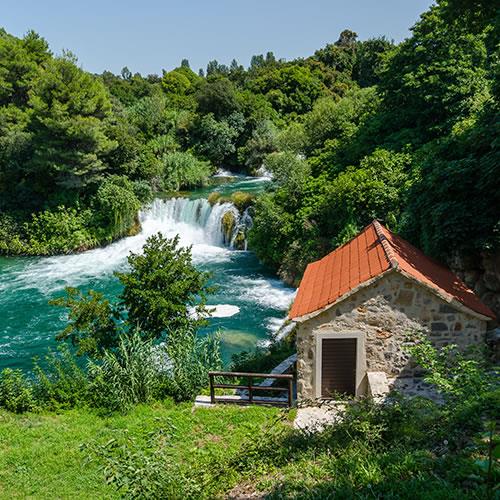 Your Last Day in Šibenik

Depart your hotel and head to the airport for your return home. If self-driving, please return your rental car to the place noted on your reservation (usually the airport, but double-check to make sure). If you are purchasing a private transfer, a representative will meet you at the hotel in time to take you to the airport for your flight out. We hope you enjoyed the sights of Šibenik! 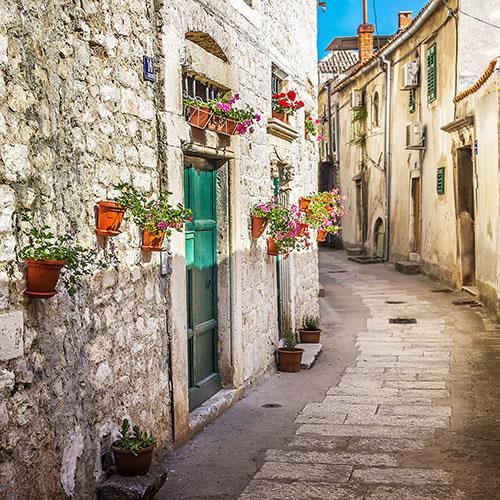