Welcome to Croatia! Upon arrival, you will go through customs and immigration. Should you opt to purchase a transfer to your hotel, a representative will be waiting for you as you exit immigration. Otherwise, make your way to Kaštela and arrive at your hotel. Check in and do not give in to jet lag! There is so much for you to see and do!

The sights of the Gulf of Kaštela are, for the most part, situated along the coast. The seven townships, from west to east, are spread out across a total of 5.6 miles, making it very easy to see the sights of Kaštela in two days. For the first day, which may be shorter than the second day depending on the time your flight arrives, we will focus on a more compact itinerary by visiting the westernmost three townships: Kaštel Štafilic, Kaštel Novi, and Kaštel Stari.

The coastal road by which all the sights in Kaštel Štafilic are accessible is called Bijacka ulica. If it`s early enough in the day, consider spending some time at the beach: Kaštel Štafilic has two, Bijacka Kaštela Beach and Gabine Beach. In between those two beaches, the main sights of Kaštel Štafilic you must see are noted buildings from the founding of the township. Nehaj Tower is first. Located on the coastline, it is a portion of a fortress that began construction in the 1540s and was never completed. Kaštel Štafilic`s completed fortress is about a quarter of a mile east and is called Kaštel Štafileo, also known as the `Castle Rotondo`. The fort was constructed in 1508 and is the one of the oldest sights in town -- but not older than the 1500-year-old olive tree, believed to be the oldest tree in Croatia, which is located north of Kaštel Štafileo by about 1,000 feet, along Put Svete Lucije.

If you aren`t going to visit the olive tree, walk about 900 feet east from Kaštel Štafileo and you will see Kaštel Novi`s fortification, Cippico Castle. It was built by a nobleman from Trogir in 1512 as a fortress/residence, and fortifications were built around the township to protect his laborers from possible invasions. One street above Cippico Castle, you will find the Church of St. Peter the Apostle, with its famed silver and gold vestments which date from the 13th century. Walking along the waterfront road (Obala kralja Tomislava, King Tomislav Shore Road), you will see a tall statue of St. Roch on a horse, a replica of a similar sculpture seen at the church above the Peristyle in Split.

Now if you are wondering why Kaštel Novi and Kaštel Stari (lit. `new castle` and `old castle`) have the names they do, it`s because the castles in these townships were built by the same family. In fact, both of them are called Cippico Castle! Koriolan Cippico built his fortified mansion on a sea reef, much like his nephew Pavao Antun Cippico did in Kaštel Novi a generation or two later. The five-altar Church of St. John the Baptist nearby dates from the seventeenth century. There are a number of bars and cafés along Obala kralja Tomislava where you can stop in for a bite to eat or a drink to wrap up the evening. Return to your accommodations at the end of the evening. 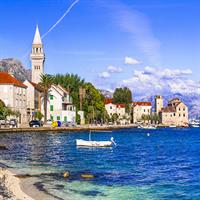 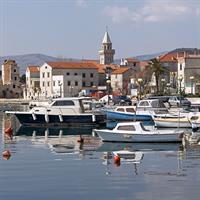 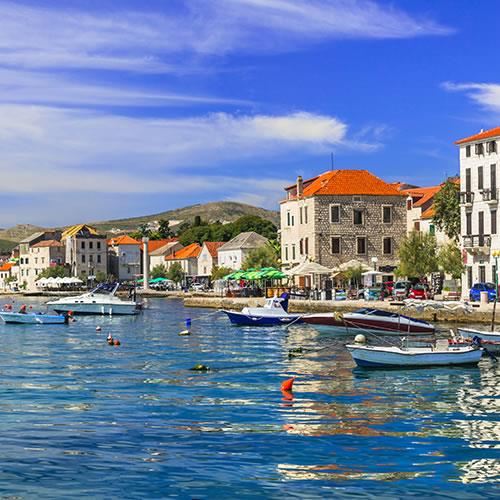 Let`s start bright and early in Kaštel Lukšic, the middle of the seven townships. If you want to take some time in the morning or afternoon to go to any of the beaches in this area, there are four you should know about: Šumica Beach and Ostrog Beach, both in Kaštel Lukšic; Baletna Škola Beach in Kaštel Kambelovac; and Gojaca Beach in Kaštel Sucurac. Otherwise, we will start early with sightseeing. The waterfront road in Kaštel Lukšic is called the Šetalište Miljenka i Dobrile. A fortified brick mansion was built along the waterfront, on top of a sea reef, in the late 15th century but eventually had to be abandoned. This is called Kaštel Rušinac. About 1,200 feet to the east, you will see the area that comprises the modern township, which grew around a palace built on a sea reef by the Vitturi brothers in 1564. You will find many points of interest in and around Vitturi Castle, such as the local tourism office, the Kaštela Town Museum, and just one street away from the castle, the Gothic and Renaissance-inspired Our Lady of the Assumption Church. Ostrog Beach is situated just across the street from Vitturi Park.

You can either walk, drive, or take a taxi 1.1 miles to the next township, Kaštel Kambelovac. Like with the other townships, noblemen from other areas built fortresses/mansions to protect themselves and their workers from outside aggression, and the townships grew outward from the fortress. Cambi Fortress, built by two brothers to protect their land, is the only fortress in Kaštela to feature a cylindrical, and not a square, turret. Lose yourself in the maze of streets in Kaštel Kambelovac. Visit St. Michael the Archangel Church nearby, and then grab lunch at one of the numerous restaurants and cafés in the vicinity. We still have a lot more to see in the afternoon!

The main road along the waterfront curves inland a tad and changes names, this time to Primorska ulica. Unlike many of the townships which had castles built by noblemen, the fortress in the next township, Kaštel Gomilica, was built by Benedictine nuns. The large castle, called Kaštilac, was built offshore on a sea reef and was meant to protect the nuns from attack -- originally from the Turkish but they proved to be useful defenses against other forces as well. The townspeople built their original village close to the fortress, and today you see that area is clustered south of Primorska ulica. Spend a good amount of time touring the most elaborate of the fortresses Kaštela has to offer.

Kaštel Sucurac, the easternmost of the townships, is located 1.5 miles away from Kaštilac. You will pass Kaštela`s state-of-the-art marina and a couple of shopping centers en route. The oldest fortress in Kaštela was built in Kaštel Sucurac, at the end of the 14th century by the Archbishop of Split, but it has since been demolished. The modern township grew in the area around the `new` Archbishop`s Palace (`new` as in completed in the 16th century -- over a century after the first fortress). You will find the Archbishop`s Palace just off Podvorje Square. A branch of the Kaštela Town Museum is located here, and features an exhibition room called `Podvorje` with artifacts from the 15th and 16th centuries. If you are curious as to where the first fortress was located, it was situated to the west of the Archbishop`s Palace, around the Church of St. George. 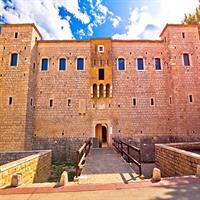 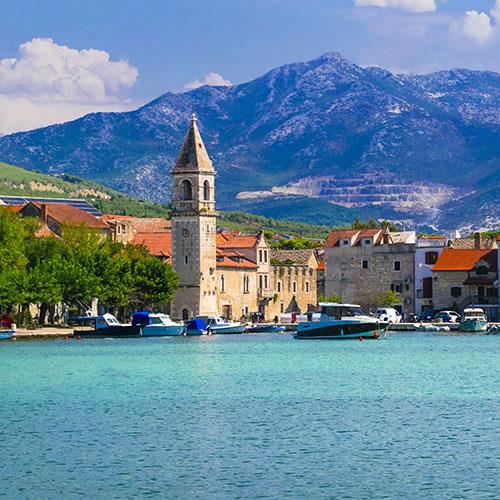 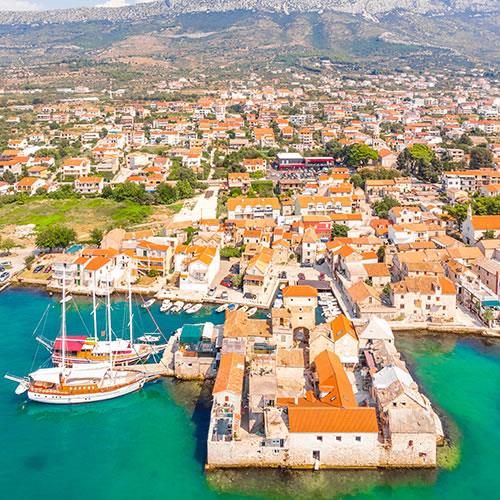 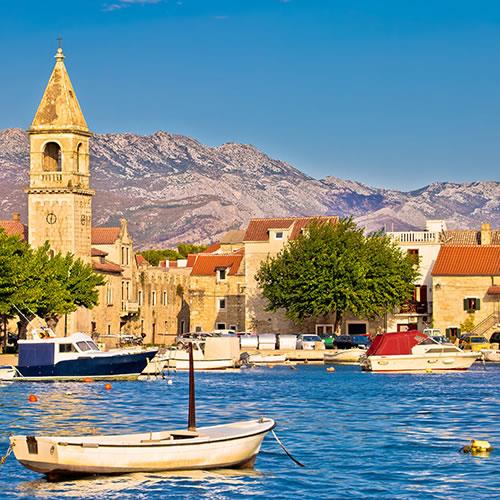 If you have more time in the area, consider visiting the two cities that bookend the townships of Kaštela, namely Trogir and Split. Trogir is on the west side of the Gulf of Kaštela, and Split is on the eastern side. One of the best stops on the Dalmatian coast, Trogir is a living museum, the best-preserved Romanesque-Gothic complex in the Central Europe. Its medieval core, surrounded by walls and comprising a magnificient castle and tower and a series of dwellings and palaces from the Romanesque, Gothic, Renaissance and Baroque periods, has been named to the list of UNESCO World Heritage Sites.

Split is the second-largest city in Croatia, and its history stretches back over 1,700 years. The Roman Emperor Diocletian built his lavish retirement palace here. It is the largest and best-preserved example of a Roman palace left in the world, and it is listed on the register of UNESCO World Heritage Sites. Diocletian`s Palace is the gem of the Old Town, a pedestrianized zone which includes the beautiful waterfront called Riva. To many travelers, Split is often seen as a hub for discovery of nearby islands and other Croatian cities, but with Diocletian`s Palace as its most iconic landmark, Split welcomes millions of visitors each year in its own right. 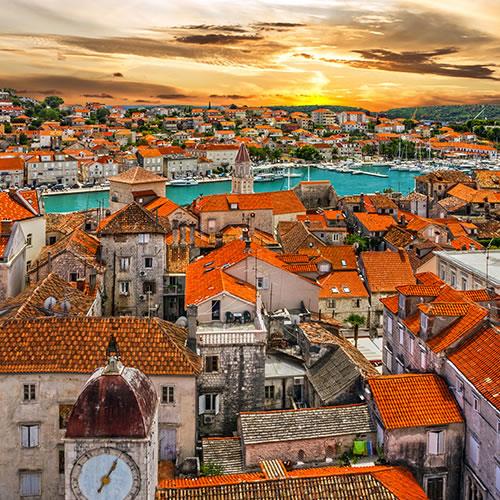 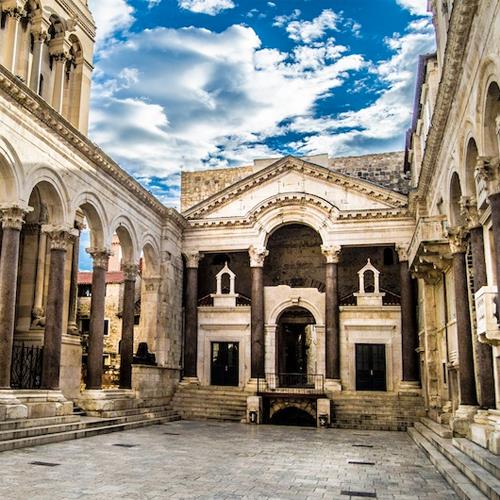 Your Last Day in Kaštela

Depart your hotel and head to the airport for your return home. If self-driving, please return your rental car to the place noted on your reservation (usually the airport, but double-check to make sure). If you are purchasing a private transfer, a representative will meet you at the hotel in time to take you to the airport for your flight out. We hope you enjoyed the sights of the Gulf of Kaštela! 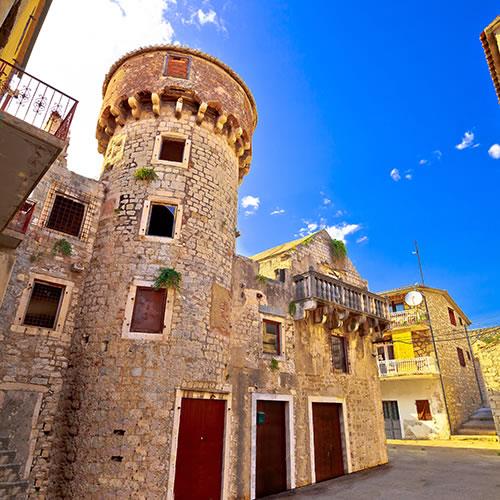