Welcome to Bern, Switzerland`s capital city! Upon arrival, you will go through customs and immigration. Should you opt to purchase a transfer to your hotel; a representative will be waiting for you as you exit immigration. Arrive at your hotel, check in and do not give in to jet lag! There is so much for you to see and do.

Set out to see some of the most beautiful attractions in the city by taking a stroll through the Old Town, the hub of the city. Discover the incredible medieval history where you`ll feel like you have stepped back in time. The cobbled streets are lined with over 3.5 miles of covered arcades, which date back to the 15th century. Within these streets you`ll find a combination of charming boutique shops, restaurants, wine bars and international brands. We highly suggest taking a walking tour of the Old Town Bern, a great way to learn more about Bern from a local guide.

Make a point to stop at the famous Zytglogge Clock Tower situated right in the heart of the Old Town. The main attraction is watching the glockenspiel chime, which happens every hour on the hour. The complex mechanism within the clock tower operates the elements of the glockenspiel and it`s mind-blowing to think it works exactly the same as when it was created in 1527. Tours take place every day at 2.30 pm when you can ascend up to the top of the Clock Tower to see the inner workings of the mechanism and incredible views of the city.

Towering over Bern on the other side of the river is the beautiful Rose Garden. We recommend you make the climb up the path to take in the stunning views over the city, a beautiful spot to be for sunset. It`s here where you can get a bird`s eye view of the unique horse-shoe river bend and the Old Town that sits within it. Finish off your day at the beautiful restaurant located here, a prime location with wonderful views while you dine. 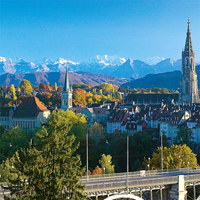 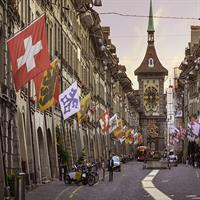 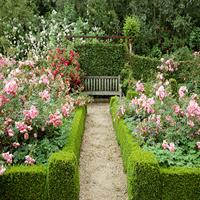 Start your day with a visit to Gurten, Bern`s Mountain located just south of the city. From the top, you can soak up spectacular views of Bern and the Alps, you can see across the Three Lakes Region all the way to the Jura Mountains. The Gurten is easy to access and there is a funicular station that will get you up the mountain in just 5 minutes (in operation since 1899!). Once you arrive at the top, take a hike if the weather permits, there are tons of flowery meadows that lead into thick forested trails. If you visit in the winter, there`s a toboggan run when there`s enough snow. When you visit the Gurten, you must climb the tower for even more stunning 360-degree views.

Head back into town to enjoy a bite to eat to fuel up for the rest of your day. We recommend the lovely Kornhausplatz, one of the main squares of the city. It is a great place to relax and people watch over a meal.

After lunch, head to the Bern Münster (Bern Cathedral). Marvel at the remarkable sculptures depicting the Last Judgment. Do not miss the opportunity to conquer 222 steps up winding stairs to the tower. This part is one of the most famous spots in Bern to get fantastic views of the city and the snow-capped mountains of Switzerland.

Spend the remaining part of your day discovering a few of the galleries and museums in Bern. We highly recommend a tour of the Einstein House (Einsteinhaus), the former residence of Albert Einstein. He once lived in Kramgasse 49, an apartment in the Old Town. It is said that he wrote the `theory of relativity` in this place and was where most of his scientific discovery happened. After your tour of Einstein House, do a quick visit to the Samson Fountain and Justice Fountain.

End the day at one of the one of the many delicious restaurants of the city. 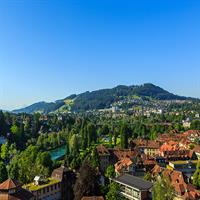 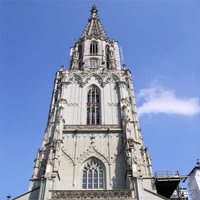 On your last day in Bern, spend the day seeing those attractions that you haven`t yet had time for. You may want to spend some time in the famous Bärengraben (Bear Pit), one of the most famous attractions in city. The bears have been kept in the Bear Pit since 1513 and have become the symbol of the city. After hundreds of years (and after international pressure), the Bear Pit has been made more bear-friendly in 2009. They replaced the crowded pits with spacious park and access to the grassy hillside and views of the river.

Those looking for culture will find it in Bern`s Fine Arts Museum (Kunstmuseum), the Historical Museum of Bern, the Paul Klee Center, and the Natural History Museum.

You may also want to spend some time in the beautiful Botanical Garden of the city. It will impress even those that might not think they are interested in plants and flowers. The garden contains several sections. The Alpinum focuses on montane ecosystems hosting mountain plants from Europe, Asia, and North America with special focus on Swiss flora. There is also an interesting display on endangered species. And the Palm House is particularly interesting as it focuses on tropical food-producing plants such as bananas, coconuts, and coffee.

You will definitely want to pay a visit to Bern`s Renaissance-style Bundeshaus (Parliament building) that stands on the edge of the high ground above the Aare River. The domed central block contains the two chambers of the Swiss Parliament, the meeting places of the National Council, and the Council of States; in the east wing and west wings are various federal agencies and the federal library. The entire place is open to visitors. Access is slightly restricted when Parliament is in session.

Just outside the Bundeshaus is the Bundesplatz, a square with many cafes, shops, and Renaissance-style buildings as well as the Banknote Museum. Just beyond is the Little Redoubt, a popular viewpoint in Bern, with an orientation map pointing out important sites. Next to this old structure are the gardens and a monument to Oskar Bider, who made the first flight over the Alps in 1913. The Theaterplatz, to the east of the Bundesplatz, is where you will find the Hôtel de Musique, the Assembly and Concert Hall, and the Municipal and University Library.

Spend your last evening enjoying the performing arts of the city at Bern Symphony Orchestra. Or grab a drink or two in Old Town. You may also want to continue on to enjoy a livelier nightlife scene at one of the several late-night clubs, with dancing and cabaret. 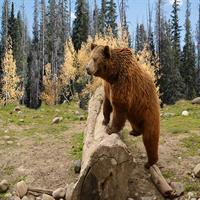 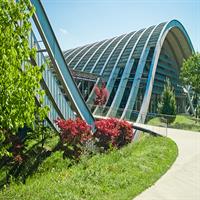 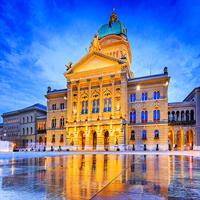 Should you be able to spend additional days in Bern we recommend a day trip to world famous Interlaken. About 37 miles from Bern in the Bernese-Oberland section of the Alps, the town and region is the gateway to a land of mountains, lakes, and rushing rivers. Situated between Lake Brienz and Lake Thun, the town sits on the river that links the two bodies of water. It is extremely popular for its outdoor recreational activities that are offered here.

Alternatively, you may want to choose another one of the beautiful towns within an easy driving distance such as Thun, Biel, Murten or Fribourg. 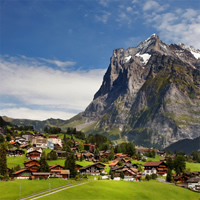 Your Last Day in Bern 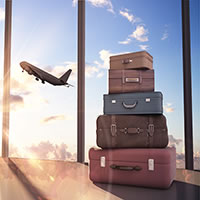