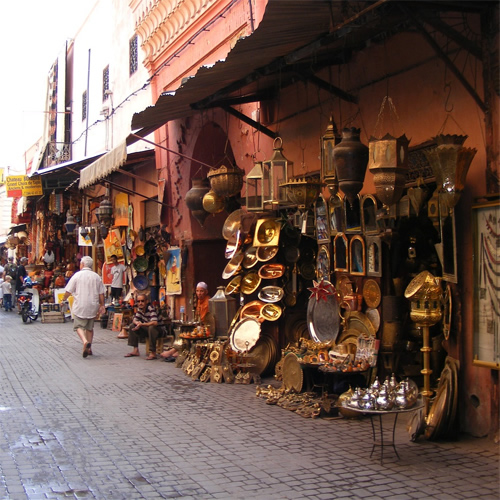 The Medina and Rahba Kedima

The Medina of Marrakech is the central portion of the Old City. The medina grew and thrived almost immediately after the town was founded by the Almoravid dynasty in 1072. Within mere decades, the influence of Marrakech grew to impact the entire Arab world. Many sights are located in The Medina, including the Koutoubia Mosque, the Kasbah Mosque, the Ali Ben Youssef Mosque, the Saadian Tombs, and the city`s main square, the Jemaa el-Fna. Marrakech`s Medina was named a UNESCO World Heritage Centre in 1985.

Rahba Kedima is a neighborhood that is populated with souks, especially in the alleyways stretching out from Place Rahba Kedima. Not only are there spice vendors available to sell exotic spices to tourists, there are also apothecaries who put together `spells` for locals and sell tourists cosmetics at the same time. Talk about multi-tasking! The Medina and the area south are very densely populated. Out of a population of nearly a million in Marrakech city limits, over 200,000 live in The Medina and Rahma Kedima. 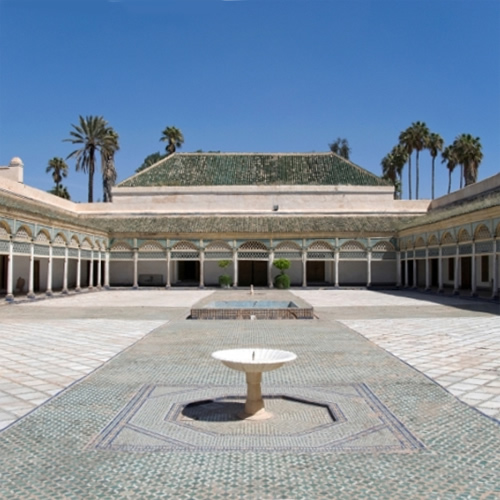 South of the Medina (Derb Dabachi and Djane Ben Chegra)

Derb Dabachi is a road which runs to the east of the Jemaa el-Fna. Everything in these two neighborhoods are located between Derb Dabachi to the orth and Avenue Imam El Ghazali to the south. The riad and garden Terrain Charij takes up a lot of land area in the Djane Ben Chegra neighborhood. Sights of interest in Derb Dabachi include Dar Si Said, Palais de la Bahia, and Musee Tiskiwin. 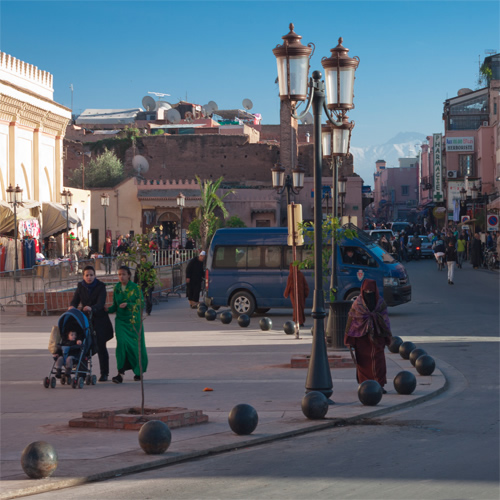 The road that divides The Medina and the area east of The Medina before the Oued Issil wadi/river is called a number of names as it meanders downward. It is known by the names Avenue Bab El Khemis, Rue Tachenbacht, and Avenue Ba Ahmad. The road to the east which runs parallel to the Oued Issil is called the Route des Remparts. Much of this area is called `riad row` due to the high numbers of riads, which are traditional Moroccan mansions transformed into bed-and-breakfasts. You will also find Marrakech`s tanneries in this area, especially in and around the area of Bab Debbagh in the El Moukef neighborhood. 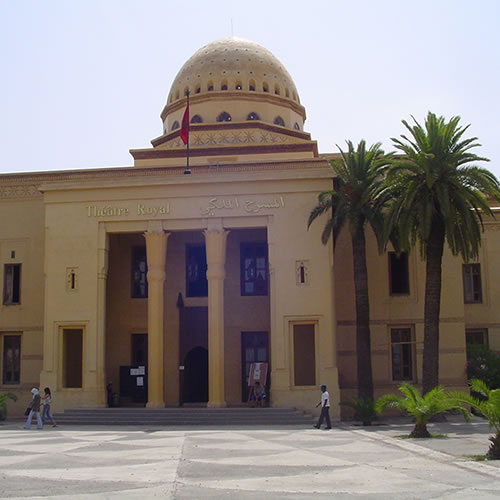 West of the Medina (Gueliz, El Hara and Bab Doukkala)

One of the five `arrondissements` of Marrakech is called Gueliz, which was built at the beginning of the twentieth century as a modern version of the city, especially when contrasted with the Old World ambience and charm of The Medina. Today, about 180,000 people live in Gueliz and the neighborhood immediately to the south, El Hara. Most of the bars and nightclubs in Marrakech are located in Gueliz and El Hara, and there are a number of high-end shopping centers in this area as well.

The Bab Doukkala neighborhood, sandwiched in between the `New City` of Gueliz and El Hara and The Medina, is a popular residential neighborhood and is a favorite of tourists who select hotels and riads in this area so they can people-watch and observe Moroccans going about their daily tasks, such as working and going to school. As far as sights are concerned, the ultra-modern David Bloch Art Gallery and the Theatre Royal are located in Gueliz, and the Place de la Liberte is the main landmark in El Hara. Marrakech`s city hall sits at the southern end of Bab Doukkala, near the city`s conservatory of music. 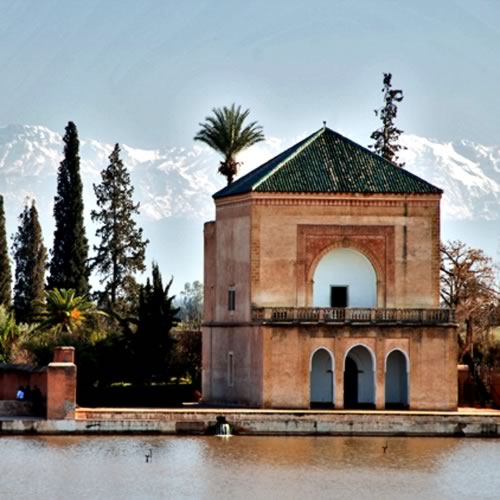 Menara is one of the five arrondissements of Marrakech, which includes the neighborhoods of Menara and Hay Menara, Hivernage, and L`Oliveraie. It is the most densely-populated part of town, with over 300,000 residents, and consists of much of the area west of Gueliz. Your first introduction to this area will be the airport; if you arrive through the airport, you will be driving through Menara Gardens and L`Oliveraie.

L`Oliveraie is an olive grove and public park which is bisected by Avenue Mohammed VI. Menara Gardens, a UNESCO World Heritage Site, is sandwiched between the airport grounds and L`Oliveraie. You can find many luxury hotels, such as the Four Seasons, as well as the Marrakech Casino, in the vicinity of L`Oliveraie in the neighborhood called Hivernage. Hivernage is a French word that means `over-the-winter`, used to describe people that we would probably call `snowbirds`: people from the European continent coming down and staying at a hotel or riad for the winter months. 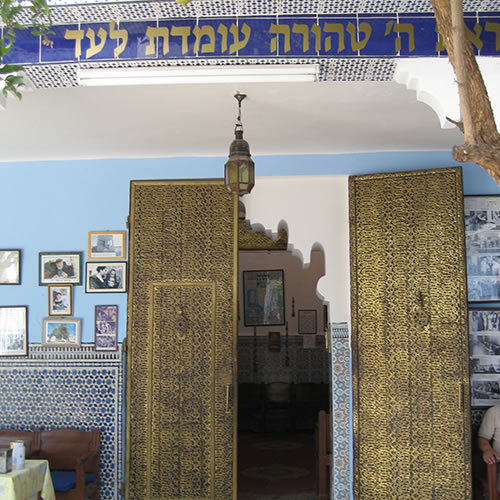 The Touareg and Mellah neighborhoods sit in a rough area bordered by Rue Touareg to the north and Rue Bab El Arhdar to the south. If you walk north through the gate at Bab El Arhdar, you will be walking toward the Royal Palace, the King`s official residence in Marrakech. If you walk south, you will be entering the UNESCO World Heritage Site, Agdal Gardens. For reference, Agdal Gardens is about 1.5 square miles in area, approximately five times the size of L`Oliveraie. The eastern two neighborhoods, primarily the Quartier Jnane Laafia, are known as the heart of the Jewish community of Marrakech. Only a few thousand Jews live in Marrakech today, and many of them live in the old `Jewish quarter`. The synagogue, Salat Al Azama, has been open since 1492, shortly after the Catholics expelled the Muslims from the Iberian Peninsula. Finally, toward the east, Bab Ghmat is a neighborhood largely comprised of the Bab Ghmat Cemetery, the final resting place for thousands of people from Marrakech. 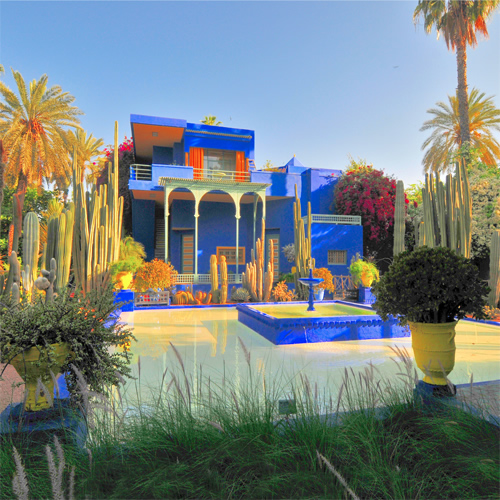 East of the Oued Issil, going along the Route de Fes between the wadi/river and the Route Passage Anakhile, you will encounter the neighborhood of Annakhil. With a population of just 53,000, it is one of the most sparsely populated areas of Marrakech and is largely a residential neighborhood, consisting of eight blocks north of the Route de Fes and nine blocks to the south. A riad set on large, forested grounds makes the southern boundary of Annakhil, adjacent to the Tourist Information Center just off Route Bab Kachich. 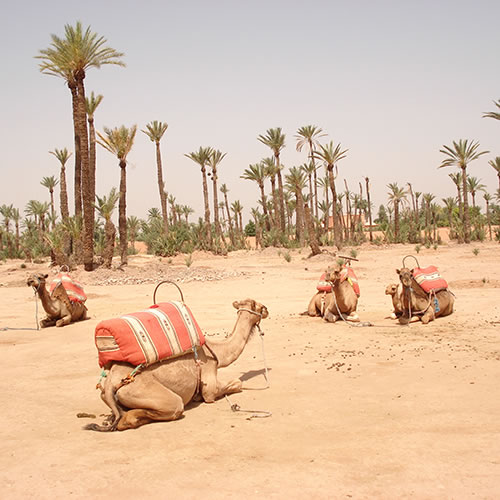 Seven miles north of Marrakech, there is an oasis sprawled out over 50 square miles where over 100,000 palm trees grow. It is called `La Palmeraie` (French for `the palm grove`). La Palmeraie was built during the twelfth century, during the time of the Almoravid dynasty, and was irrigated using an underground system. La Palmeraie is currently the well-heeled area of Marrakech, with golf courses, luxury hotels, and villas dotting the desert landscape. Dates and citrus fruits grow from the numerous palms located on vast plantations and in public parks. Tourists should definitely take advantage of the carriage rides and camel rides in the desert at La Palmeraie.