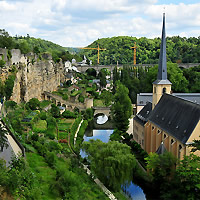 The city center in the heart of the capital is the area where you`ll find all the specialty shops, bakeries, restaurants and businesses. Most of the streets here are primarily pedestrianized. It is the liveliest district of the Luxembourg capital with two bustling squares, place Guillaume II and plae d`Armes. The city center is also home to most of the Museums in the city, the Palais Grand Ducal, the Cathedral Notre Dame, and many of the government institutions that are can be found around the busiest street the Grand-Rue.

The city center brings together the district of the old town (Alstadt) and the upper town (Obestadt). Bordered by Royal Boulevard to the north and west, Franklin Roosevelt Boulevard to the south and Jean-Ulvelling Boulevard to the east, the center is considered the smallest district in Luxembourg in terms of surface area and population. 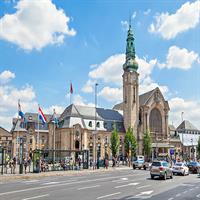 Gare Quartier is a quarter in central Luxembourg City named after Luxembourg railway station (Gare de Luxembourg). It is located to the north of the center with Hollerich to the west and Bonnevoie to the east. This is the ideal location if you are arriving by train, offering a variety of hotels and restaurants in the area. The area is conveniently situated and just a short walk, about 10 minutes, to the city center. It is worth noting to use caution around the train station area (especially late at night), which contains a handful of seedy clubs and prostitutes on the Rue de Strasbourg. 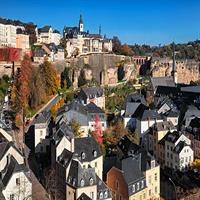 The outskirts or suburbs of the city are typically more residential areas. Here you will find it to be a more peaceful and rural area with a fewer dining places and due to the nearby forests, there are lots of running and biking trails. Make sure to account for more travel time into the city center, but typically a short bus ride away.