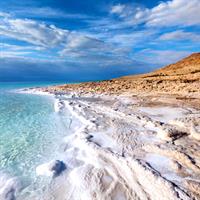 The Dead Sea region sits at the lowest point of the earth`s surface at 1,312 feet below sea level, the area surrounds the beautiful turquoise waters of the Dead Sea lake, which has the highest salt content of any body of water in the world at 33.7%. Sweimeh is a region in the Dead Sea area and the capital of Balqa in Jordan where a high concentration of hotels are located. The area sits on the northwest side of Amman the capital of the country and is surrounded by the rolling hills of the lush verdant Jordan Valley.

The Dead Sea region is known for its religious and wellness experiences where some of the most important religious sites in the world can be found along with peaceful relaxing spas with hot pools and plenty of Dead Sea products for sale. The land here is breathtaking filled with mountains in the east and green hills in the west and bordered by Jordan, Israel, and the West Bank. Ein Bokek is a major tourist destination in the Dead Sea region and one of the most popular beaches with a strip of hotels and resorts dotted along the beachfront. There are also plenty of restaurants, cafes and bars in the area and the boardwalk with other attractions.

The Movenpick Dead Sea Resort is a unique five-star resort tucked away on the northern beaches set in a traditional village with beautiful vibrant gardens and views of the Dead Sea. There are several dining options at the resort and a lavish Spa with hot pools filled with water pumped directly from the Dead Sea.