Welcome to Petra! Upon arrival at the airport, you will go through customs and immigration. Should you opt to purchase a transfer to your hotel; a representative will be waiting for you as you exit immigration. Arrive at your hotel, check in and do not give in to jet lag! There is so much for you to see and do!

We recommend you start off your visit to the ancient city of Petra with a light exploration of the amazing UNESCO World Heritage site by walking through the winding sandstone canyon of the Siq. The Siq is the gateway to this amazing archaeological site where hundreds of temples, tombs, and ruins are located. The Ancient world of Petra is one of the Seven Wonders of the Modern World and you will instantly see why when you walk through the 1.24 mile of split rock rising up 262 feet tall on both sides. Take some of the most breathtaking pictures in the world surrounded by these magnificent swirling colorful patterned rocks.

Once you emerge out of the dramatic Siq entrance, make your way to another awe-inspiring site, The Treasury or Al Khazneh in Arabic. The spectacular 131-foot tall façade is intricately decorated with Corinthian capitals, friezes, and figures. A giant urn stands at the top of the Treasury structure and is rumored to contain a Pharaoh`s hidden treasure. The structure was constructed during the 1st Century BC consisting of two floors with three chambers with the elaborate façade carved out of the simply stunning sandstone mountains.

Make your way back to Petra town or Wadi Musa and choose from one of the restaurants for dinner and a drink before heading back to your hotel for a restful night`s sleep. 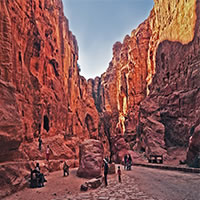 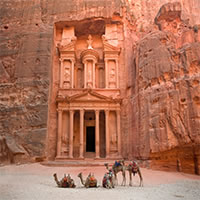 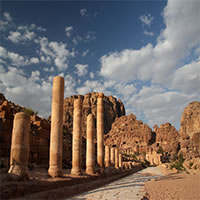 Continue your explorations of Jordan`s archaeological jewel, the Rose City of Petra. Start your day early and get out to the site before the crowds and heat hit. You can take a horse carriage ride through the Siq this time around; enjoy the ride and the beautiful surrounding scenery.

After the Treasury, you will come across the Royal Tombs which are reached by a series of steps that ascend from the valley. The collections of tombs are made up of The Palace, The Corinthian, The Silk and The Urn tombs, all of which is a magnificent site. Each tomb has its own unique characteristics and history. The Silk tomb, for example, is named for its stunning colorful sandstone swirls of pink, white and yellow that stands out on the façade.

Next up is the spectacular Roman Theatre, carved into the mountainside at the base of the High Place of Sacrifice. This massive theatre consists of 3 horizontal sections of seats divided by passageways. The theatre can hold more than 8,500 spectators and was built over 2,000 years ago by the Nabataeans.

The High Place of Sacrifice sits at the top of Jabal Madhbah providing breathtaking views of Petra and the surrounding areas. There is a steep climb to the top up some stairs but the views are definitely worth it. Continue wandering the colonnaded streets through the maze of temples and tombs, stop for a picnic and pick up some unique souvenirs from the stalls on site.

After you have fueled up with lunch take the biggest and most strenuous hike in the ancient city, climb up 800 stairs (2 ½ miles) to The Monastery (you can always take a donkey ride to the top). This impressive monument stands on the hilltop and is the largest building in the city, featuring a similar design to The Treasury. The Monastery was built during the 3rd Century BC, carved out of the mountainside. At the top visitors will find a cave café, sit back with a snack and refreshment and enjoy the sweeping views of the ancient city bathing in the mid-afternoon sunlight.

As evening time approaches head back down to the center of the ancient city and partake in the `Petra by Night` tour. You will be guided through the park at night with some of the sights lit up by thousands of candles. Enjoy dinner at the only restaurant on site The Basin which offers a full menu of local cuisine and a buffet. The Petra by Night tour begins at 8:30 pm on Monday, Wednesday and Friday evenings and includes live music and stories of the history of Petra. (Tickets are an additional cost to the daytime entrance tickets.)

After a busy day of sightseeing return to your hotel for a good night`s sleep. 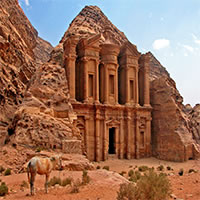 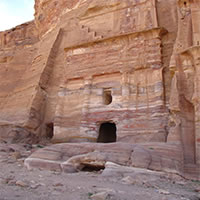 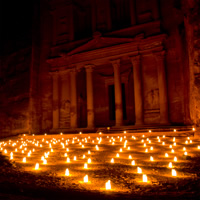 Today, head out to the mountainous desert region of Wadi Musa to the archaeological site of Little Petra also known as Siq al-Barid (Cold Canyon). The ancient area stands tall 3,410 feet above sea level in the desert. Buildings are carved into the sandstone canyons of the Petra Archeological Park and a UNESCO World Heritage Site. Take the stairs that lead up to the charming Painted House with intricate paintings on the ceiling including a winged cupid with a bow and arrow. There is a narrow gorge just like the entrance to the ancient city of Petra as well as tombs, storage houses and residences.

Alternatively, visit The Tomb of Aaron or Shrine of Aaron that sits atop of Jebel Haroun which is the tallest point in the ancient city of Petra. The 13th-century shrine was built to commemorate the death of Moses older brother, a white dome sits at the top of the shrine and there is a small church and the tomb of Aaron. This is one of the most important religious sites in the country. A hike to the top can take 2-3 hours to complete.

After a busy morning exploring, visit the Al Yakhor Turkish Bath for a relaxing afternoon of pampering and spa treatments. The local baths or `hammam` offer saunas, massages, scrubs and hot baths to relax and revive your tired muscles.

As evening time approaches, make your way out of Wadi Musa on the road that heads to Taybeh where you can catch the best sunset views from a local park about 10 minutes out of town. From here you will have stunning views of the sun setting in the valley over the ancient site in the distance. Other great locations to capture a sunset are the Movenpick and Marriot hotels where you can also enjoy cocktails as the sun sets and dinner afterward.

Back in Wadi Musa visit the oldest bar in the world located inside a cave. The Cave Bar is a popular local hangout with drinks, dancing and live music. 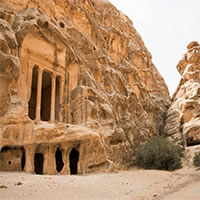 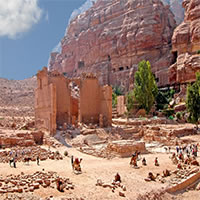 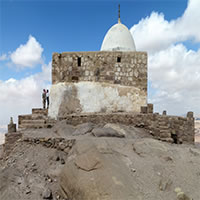 Should you be able to spend additional days in Petra, head out to Wadi Rum the `Valley of the Moon` and explore the protected region filled with mountains, dunes, and canyons. This area was where TE Lawrence who was known as `Lawrence of Arabia` fought alongside the Bedouin locals in WWI.

Visit the Dead Sea which is the lowest point on the earth at 1,312 feet below sea level where you can float effortlessly in the water that is filled with high levels of salt and minerals. 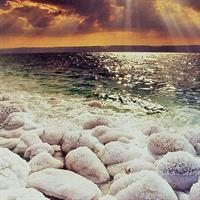 Your Last Day in Petra 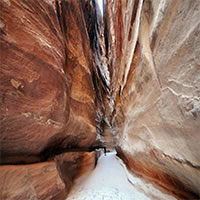