Welcome to Malta, one of Europe`s smallest countries! Upon arrival, you will go through customs and immigration. Should you opt to purchase a transfer to your hotel; a representative will be waiting for you as you exit immigration. Arrive at your hotel, check in and do not give in to jet lag! There is so much for you to see and do!

Start your day with a visit to the old town of Birgu, one of the oldest inhabited areas in Malta, with tons of history to back it up. It is the most famous of what is referred to as `The Three Cities,` which also includes Senglea and Cospicua. All three villages are built very close to each other around the Grand Harbor and are marked with traditional Maltese architecture, such as the famously brightly-painted wooden balconies.

Birgu`s population is almost 3,000, making it a lovely part of Malta to visit. While visiting, be sure to stop in for lunch at one of the hole-in-the-wall restaurants that line the streets and alleyways of the city, some offering a stunning view of the mega-yachts in the harbor.

A few points of interest in Birgu include the excellent Maritime Museum and the Inquisitor`s Palace. Both museums are definitely worth spending an hour or so in. Before leaving, be sure to visit the the impressive Fort St. Angelo, a must on any Malta itinerary. This fortification on the edge of the city of Bigu was built by the Knights, strategically built over the ruins of a castle which dated back hundreds of years. Fort St. Angelo may also be of interest because it is where some of the scenes from season 1 of Game of Thrones were shot. Diehard fans of the show can even take a private tour of all the locations in Malta where it was filmed.

There is no better way to experience the Grand Harbor than by experiencing it by boat. Take a boat tour around some of Malta`s majestic natural harbor. You can take a lovely gondola ride in one of the colorful traditional Maltese fishing boats. This will take you over to Valletta to continue your sightseeing.

Valetta is one of Malta`s three UNESCO World Heritage Sites and the capital city, a fortress with a rich and valiant past. It has an artistic culture and is one of the essential places of Malta. The steep and charming streets can be explored on foot. While the city has survived many historical events, it has undergone no significant modifications since 1798. There are some great free walking tours in the area that we recommend if you want to delve a bit into the history here.

The main site that you shouldn`t miss in Valletta is the St. John`s Co-Cathedral, where an exiled Caraveggio`s masterpiece `The Beheading of Saint John` is displayed. The baroque church is unique for its tombstone-covered floor, where 400 knights and officers of the Order of Saint John were buried after having fallen during the Great Siege protecting Malta.

For sunset, head to the Upper Barakka Gardens that overlook the Grand Harbor (just opposite from Fort St. Angelo, where you started your day). From here, you can take in the most beautiful panormanic views in all the city. If you make it here around 4pm, you can witness the Saluting Battery, a theatrical ceremonial cannon firing that takes place daily.

Finish your day at any of the delicious restaurants in Valletta. The restaurant scene is a an eclectic mix offering a variety of cuisines to satisfy all tastes. If you are up for trying the local fare, there are a growing number of restaurants that can be found around the city offering their own versions of traditional specialties. And make sure to have a glass of Maltese wine that features the local indigenous grape Girgentina. Malta only exports about 3% of its wine to the world, making trying the Maltese wines a priority when you`re here.

After a full stomach and a busy day of sightseeing, head back to your hotel for a restful night sleep. 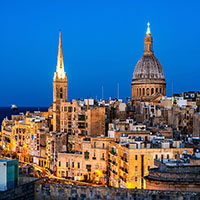 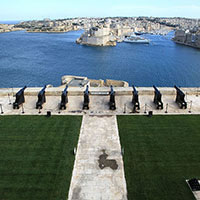 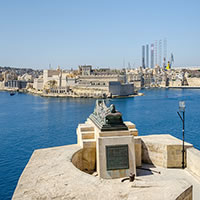 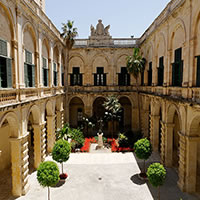 Start your day with some pastizzi and tea. Malta`s traditional snacks called pastizzi, a kind of local dumpling stuffed with a delicious ricotta cheese or peas amidst several flaky layers of dough. Served with coffee, tea or a local juice made of fresh fruits, you can`t ask for a better breakfast in Malta.

After breakfast, start your day with a boat ride through the Blue Grotto, a must-do during your visit! This picturesque grotto (a fancy word for a series of caves) is located near Wied Iz-Zurrieq, south of the town of Qrendi. A boat ride will take you through six caves through natural formations that are stunningly beautiful. While it is possible to swim at the Blue Grotto, it is not always ideal due to the busy boat traffic. If you want to take a dip, we recommend swimming nearby at Ghar Lapsi (Ascension Cave), a quieter location.

While nearby, stop at ¨¤aġar Qim and Mnajdra Temples, a UNESCO World Heritage Site dating from 3200 B.C. This is a great stop for you history buffs!

Make your next stop at the Dingli Cliffs. The Maltese Islands are known for their beautiful sheer cliffs, which are made of layer upon layer of sedimentary rock. The Dingli Cliffs on the west coast of Malta are an particularly remarkable sight. These cliffs are island`s natural fortress, and because of this, the Knights did not have to worry about protecting themselves from invaders the same way they did in the natural harbor of Valletta. The cliffs here proteted this coast of Malta from all sorts of enemies over the years. The view from here is breathtaking as well!

Spend the rest of the day enjoying the fabulously ancient Mdina, the walled Silent City. Malta`s former capital sits in the center of the island, and within its walls just across the little bridge, time has literally stood still. This time capsule of a city was and still is to this day, the home to Malta`s nobility, many of them direct descendants from Norman and Sicilian lords who made their homes here. Its history goes back over 4,000 years. With traffic extremely limited (only to residents), it is a great area to wander the narrow winding streets without interruption and marvel at the ornate palaces, many of them still private homes. Make a stop at the 11th-century Mdina Cathedral and then The Bastion for fabulous views of the island.

Mdina is even more beautiful in the evening, as Mdina`s iron lamps cast many a golden glow across the cobbled streets of this ancient city. It is quite magical to ride through the city on a karozzin (traditional horse and carriage). Stop in one of the restaurants to wind down your day over a declicious meal. 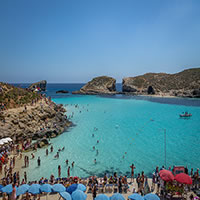 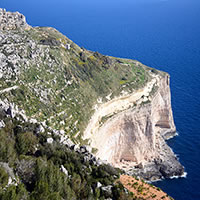 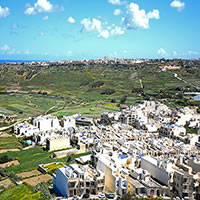 Rise and shine! Start by fueling your day with a traditional local breakfast. Afterward, grab a short ferry ride to spend your day on the tranquil green island of Gozo, the smaller sister island of Malta. This is the second largest island and has lots of beautiful rural views to take in, along with some of the country`s most famous coastline sites. You can opt for Gozo tour with one of the sightseeing companies which is a great way to explore the area, or take the hop-on hop-off bus, which makes it easier than waiting for buses and figuring out routes.

Once in Gozo, we recommend to visit Victoria, the capital city formely known as Rabat. Make your first stop at the Cittadel to take in the sights. Outside and in, you`ll find beautiful architecture. Make sure to stop in the cathedral, the museums of archaeology or folkore as well as the Cathedral Museum. If you climb to the citadel`s highest point, you`ll be rewarded with panoramic views that stretch out far over Gozo.

Next stop, the Ggantija Temples to take a trip back to 3000 BC. This is one of the most fascinating (and oldest) archaeological sites found near the village of Xaghra. Dating from 3600 BC, there`s still much that`s unknown about the two Ggantija Temples. What is clear, is that these temples are the oldest free standing monuments in the world. As you explore you`ll notice each temple contains a series of `niches` or chambers, in which rituals or sacrifices could be performed. Although it is not entirely known what the exact function of these temples were, it is likely that these may have been the site of a fertility cult.

Make a short stop at the Ta` Pinu Sanctuary, an imposing church renowned for its miraculous healing powers, the walls in the back being filled with letters from people all over the world expressing their gratitude and devotion.

An optional stop, you may, or may not want to visit, is the location of the former Azure Window. Sadly, the iconic Maltese natural rock arch collapsed into the sea on March 8th, 2017 during a storm. It was featured in movies and TV shows, including HBO`s Game of Thrones. You need to use your imagination now, as the Azure Window is no longer, but the location is gorgeous and well worth a visit. It is a great area to take photographs, admire the views, swim in a natural pool or go diving. You can also visit the Azure Window Restaurant (still goes by this same name today) for lunch while in the area.

Spend the remaining part of yur day at what is considered to be the island`s very best sand beach: Ramla Bay. This beautiful reddish sand beach is a perfect place to relax after a busy day of sightseeing and a great spot to catch the sunset.

End the day with a tasty dinner at one of the beachside cafes before hading back to catch the ferry. 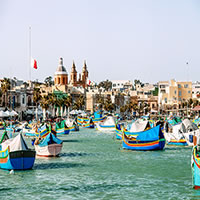 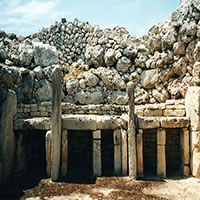 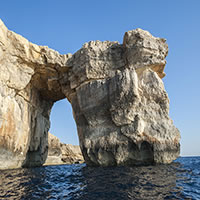 Should you be able to spend additional days in Malta, continue discover more of Malta. Visit a winery at San Niklaw, that is family owned and has delicious whites. See the UNESCO World Heritage Site of Hagar Qim and Mnajdra Temples. Take a trip to Comino in the crystal clear waters of the Blue or Crystal Lagoon. See where they filmed the original Popey movie, and take a dip in Anchor Bay. Checkout the small fishing village of Marsaxlokk Bay. Or, just laze on one of the amazing beaches all day long and relax! 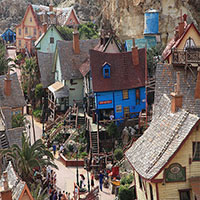 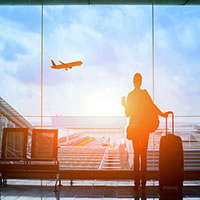