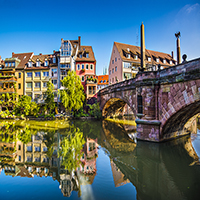 Many of the main sights lie within the restored walls of the Old Town district, also known as Altstadt. The town within is divided by the river Pegnitz. The northern half clusters around St Sebald Church and the Town Hall, and is dominated by the Imperial Castle. The southern half, clusters around the Lorenzkirch. Within the area, you`ll encounter several charming bridges that criss-cross the river.

The city center boasts spacious public squares lined with restaurants, cafes and bars, as well as many local shops and timbered houses. Between the two halves of the old town the area is filled with character, as it has many historic buildings, various charming small bridges all surrounded by half-timbered buildings. The pedestrianized Königstrasse heads to the city center, while the Hauptbahnhof train station lies to the south-east, close to the city walls. 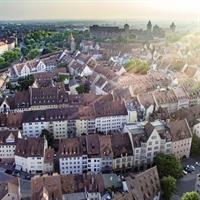 Nuremberg is located in Franconia, a region of northern Bavaria, and is the largest city in this region. It is situated on the Pegnitz River and the Main-Danube canal. Staying in the outskirts of the city center will give you easy access to the surrounding cities of the area such as Fürth, Erlangen, Schwabach, and Rothenbach to name a few. Many of the hotels located in the outskirts are convenient to public transportation which will offer direct access to the city center and/or the surrounding areas.