In September the weather starts to cool off and the crowds start to die down. Cruise ship season is in full effect and runs from June to September. September and October are the months when many things in the country completely shut down due to the holiest time of the year, Rosh Hashana (Jewish New Year) and Yom Kippur (Day of Atonement) taking place. These celebrations bring crowds from around the world to celebrate the holy days which brings increased travel prices.

September and October are said to be some of the best months to visit Israel along with the springtime when the temperatures are still pleasant with sunshine, mostly clear skies and cooler temperatures at night. The Dead Sea and the Sea of Galilee are still very hot at this time of year with average temperatures ranging in the high 90`s into the triple digits. The Dead Seas is one of the lowest places on earth which causes the high temperatures.

- Rosh Hashana - (September or early October) Jewish New Year is a two day holiday where businesses across the country shut down along with public transportation. The celebration begins at sundown and ends the following day at sundown.

- Yom Kippur - (End of September) The holiest holiday on the Jewish calendar, which lands ten days after Rosh Hashana. This is a day of fasting that lasts over 24 hours beginning at sundown and ending the following evening. 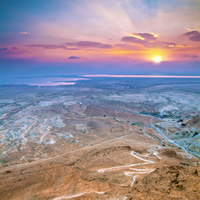