Welcome to Lourdes! Upon arrival, you will go through customs and immigration. Should you opt to purchase a transfer to your hotel; a representative will be waiting for you as you exit immigration. Arrive at your hotel, check in and do not give in to jet lag! There is so much for you to see and do.

Begin the afternoon in the city center and grab some local cuisine for lunch at one of the many restaurants, relax and take in the ambiance! Afterward, hop on the Petit Train Touristique (Little Train of Lourdes) to see some of the city`s highlights. The tour is 45 minutes and cruises through the old streets, uptown area and tourist sites of Lourdes. The trains cover 5 miles and you can hop-on-hop-off at the different museums and other significant spots. Alternatively, stroll through the quaint city and get your bearings of the area.

As evening approaches we recommend that you visit the Sanctuary of Our Lady of Lourdes for the Evening Torchlight procession, a famous, touching and breathtaking experience that takes place every night since 1872. The procession begins at the Prairie and ends in front of the Rosary Basilica. Pilgrims carry candles and torches, as well as a statue of the Virgin Mary and walk for around 1.5 hours before receiving a blessing from a priest. 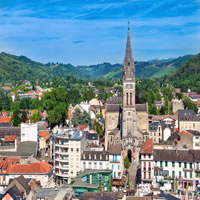 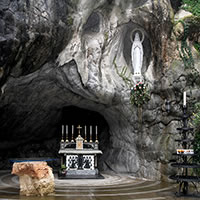 Wake up early and set out for a busy day of sightseeing. Head back over to the Sanctuary of Our Lady of Lourdes and make your way to The Baths, these are the baths that hold the spiritual Lourdes water. People from all over the world come here to take a dip into this water to purify themselves. According to the history, the Lourdes water is the water which flows from a spring in the Grotto of Massabielle (the shrine) in the Sanctuary of Our Lady of Lourdes.

Spend some time exploring the Sanctuary; it houses some of the most beautiful churches in the world. The sculptures and architectural designs around this massive shrine are stunning. Every corner you look at, there is always an interesting detail to peer upon, it`s as if you are walking through an art museum.

Next, make your way to the Grotto of Massabielle, the most sacred site at the Sanctuary of Our Lady of Lourdes. St. Bernadette`s visions of the Virgin Mary are said to have occurred here in 1858, as she was told about the spring in the grotto to drink from, and now her story leads many Pilgrims to this sacred place to take the water and pray for miracles.

Make sure to spend some time at the Basilique of Our Lady of the Immaculate Conception, known widely as the `Upper Church`, the church was built on top of the rock above the Grotto and next to the Basilica of Our Lady of the Rosary. A highlighted feature here is the nave that is divided into nine equal-sized bays; the stained glass window of the Basilica depicting the store of Virgin Mary.

In the afternoon grab some lunch and get refueled for your next adventure. We suggest trying the garbure, a local delight of vegetable stew usually served with confit duck or ham. If you want to avoid crowds, head to the back-street taverns for a more authentic experience.

For the last part of your day, head out to the Chateau Fort, a thousand-year-old fortress perched atop a rocky outcrop on the edge of the city offering a great view of the Marian Sanctuary and the Pyrenees. The ascent is steep, but a short and rewarding walk. For those whom the slope may be too difficult, a free lift is available. The history says the castle worked as a strong defense for its neighbors where people could take refuge within its wall at the time of attack. Today, it is considered as a national monument and it also houses the Museum of the Pyrenees. The museum showcases both regional artifacts, art and botanical gardens.

After enjoying the views at Chateau Fort, make your way to Le Cachot, a tiny jail room where Bernadette Soubirous (a 14-year-old girl) and her family were forced to take refuge in 1857 when her family faced hard times. Here, visitors can see the small 170 sq ft. room that the family inhabited during the time Bernadette saw her many visions and came across the Grotte de Massabielle (the shrine where Virgin Mary appeared in front of her).

End your afternoon at the Moulin de Boly, or the birth place of Bernadette Soubirous. This was originally a water mill where the girl come visionary spent her first 10 years. It was newly renovated in 2012 and is a museum featuring a bedroom, kitchen and water mill. Tours are available to learn more about the simple lives led by peasant families at the time offering a more descriptive background of Bernadette`s life.

Wind down from your busy day by wandering through the quaint streets of Lourdes. Appreciate the unassuming beauty of the city as you walk along the river and on their narrow cobbled streets. Grab a delicious crepe, some Gelato, or any other delicious cuisine at the various popup shops and restaurants in the heart of the city. 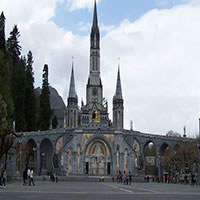 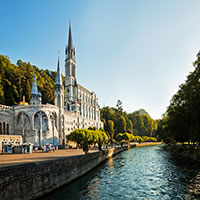 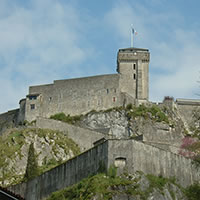 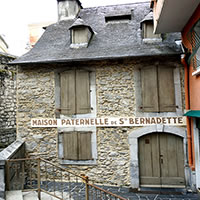 Head out today and continue to explore more of Lourdes and the Pyrenees. Start off by taking a ride or walk on the Voie Verte Des Gaves, the green Way of the Gaves, an old railway line now fully paved, approximately 23-miles round trip from Lourdes up the valley. This route passes through the heart of the Pyrenees country offering a wealth of discoveries and breathtaking views. The journey can be explored on foot, by bike or rollerblade and travels through 11 Pyrenean villages that are punctuated on the journey.

Once you arrive back in Lourdes, head into the center of town to the Les Halles De Lourdes (covered market). This is a great place to fuel up, offering all kinds of different food vendors serving up yummy tastes of great foods of the region. The textures, aromas and sights here will stimulate all your senses and give you a unique insight into how locals live, eat and interact with each other.

After You`ve taken it all in at the market get ready for some exquisite views over Lourdes by taking a trip to Pic du Jer. Unlike the Chateau, the journey up is not a short one (it takes roughly three hours), so the recommended route is via the 100-year old funicular railway, a very scenic trip in itself! Once you reach the top, you`ll be rewarded with the most exquisite view over Lourdes, the neighboring town of Tarbes, the Argeles Gazost valley and the peaks of the Pyrenees alike. The way down is easier, with a family-friendly journey via an abandoned railway track. The Pic du Jer is a sight to see at night, as the giant cross at its summit is lit up.

Continue on from here to visit the Rose Garden of St-Vincent, ideally situated between Pau, Tarbes and Lourdes, in the heart of the Pyrenees. The mountains form a wonderful backdrop to the rose garden which contains over 900 different varieties of roses.

End your day at the Betharram Grottos, situated between Pau and Lourdes. Some say these caves, which were discovered in 1810, are the most beautiful in France. They consist of five levels stacked on top of each other like storeys of a house, all with impressive geological formations at several stages of growth. They can be explored by foot, by boat or by train.

After an adventuresome day of exploring, head back to the hotel for a good night`s rest. 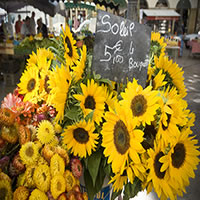 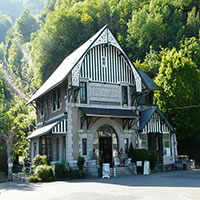 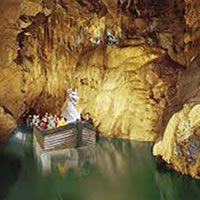 Should you be able to spend additional days in Lourdes make sure to spend some time following the Way of the Cross. This is a famous and important part of a pilgrimage to Lourdes; a heartfelt path winding along the wooded hillside for almost a mile with lifelike statues of the conviction of Jesus with 15 different stations representing the journey Jesus took.

We also recommend you take some time exploring the Cirque De Gavarnie, one of natures most unique and spectacular creations. Located in the department of Hautes-Pyrenees in the Pyrenees National Park, it forms France`s southern border with Spain. The cirque is described as a rocky cliff face or wall that forms a curved amphitheater. Numerous waterfalls tumble down the wall to create the rushing Gave River. Exploring this area offers the most amazing scenery with a spectacular backdrop of mountains, a fabulous way to see the natural beauty that is here. 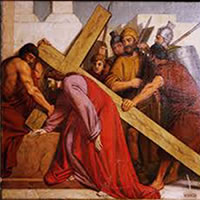 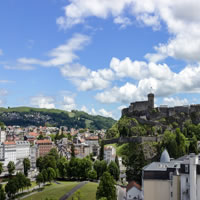 Your Last Day in Lourdes

Depart your hotel for the airport or train station where you will head home or make your way to more European adventures. Savor the memories of a very special time in Lourdes in the south of France. 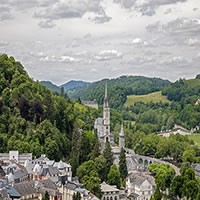