Welcome to Orange! Upon arrival, check-in to your hotel, then begin the afternoon in the center of Orange with a nice Provencal lunch to soak in the atmosphere of the city. Afterward, we recommend that you get acquainted with the city by taking a walking tour or do your own exploring of the ancient compact center of Orange. The city itself is one of the main feature attractions with narrow streets and picturesque squares. There are a lot of small streets to wander in the center. Place de la Republique is a large square in the center, ringed with colorful buildings, terrace café-restauratns, shops and even an all-weather covered carousel. Immediately north of Place de la Republique is the large open square of Place Clemenceau, in front of the Orange Town Hall. There are some interesting shops here and a few terrace café restaurants. A small river, the Meyne, circles around the north side of town, passing between buildings and backyard gardens.

The two monuments of Roman architecture, the Ancient Theater and the Triumphal Arch, are the center to the city. Both have been very well conserved over the centuries.

Make sure to tour The Roman Theatre (Theatre Antique), one of the best-preserved in existence and the only one in Europe with its acoustic wall still standing. The theater can hold almost ten thousand spectators and opera performances are still held here. From here, head to Triumphal Arch (Arcade Triomphe), at 72 feet high and 69 feet wide, it is located on the ancient Via Agrippa (the Roman trade route from Lyon to Arles) and features numerous ornate carvings relating to the history of the conquets of Augustus, the Roman supremacy over the gauls and also various religious symbols.

As night falls, head back over to Place de la Republique to enjoy dinner at one of the terrace café-restaurants while watching the world go by. 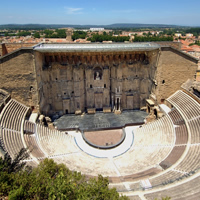 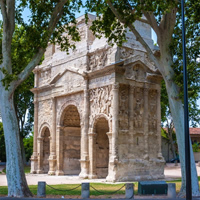 If you are visiting on a Thursday, make sure to stop at the market located in Rue de la Republique, where you can acquire some local food, such as the famous Orange Muscat wine. Wines of the Rhone have been appreciated since ancient times, which thanks to the particularly fertile soil, give the famous red wines of the Rhone.

Start the day off early and continue to explore the city of Orange. Head over to the Museum of Art and History, housed in a 17th-century mansion and former residence of Georges Van Cuyl, the Dutch man put in charge of armaments for the chateau on the hill by the Prince of Orange. The museum includes a collection of art and furniture from ancient Roman times to the 19th-century, and also covers the history of Orange. One highlight is the Roman Centaur Mosaic in the portico Room.

Another important stop to explore is the 14th-century Church of Saint Florent, founded by the Franciscans. It contains the relics of St. Florent, a Bishop of Orange in the sixth century. Inside note the 17th-century paintings by `The Virgin and the Child` by F. Girardon de Troyes.

In the afternoon make your way to Colline St Eutrope, the main green space of Orange. It has the municipal pool and a very large park area across most of the hilltop at the south end of the town center. There are open grassy areas and walking and running paths, as well as a promenade botanique. There`s a fantastic view from parts of the hill, including across the plains to the Dentelles de Montmirail in the east, or down on the Roman theater at the base of the the hill.

On your final night in Orange take more time to enjoy the pleasant city to amble around, with various colorful painted houses to see. Sit at a table outside a café, feel the Provencal atmosphere, eat some local food and enjoy a glass of the Chateauneuf-du-Pape wines of the area. 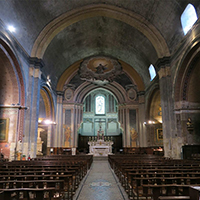 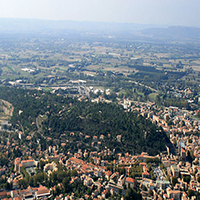 Should you be able to spend additional days in Orange, we suggest you take a day trip to discover the historical city of Avignon just a short distance to the south. A medieval town surrounded by the original fortified city walls, it offers many impressive buildings and attractions to explore, historical churches, a fine collection of museums, an extensive pedestrianized shopping area, and lots of cafes and bars.

Alternatively, take a day trip to the Roman monuments in Arles. This city is packed with things to do and discover. Best known for its association with the artist Vincent Van Gogh and the impressive Roman history dating back to the Roman times. The city has first-rate museums, excellent restaurants, and charming narrow cobblestone streets lined with attractive houses and shops, making this city a perfect destination to explore. 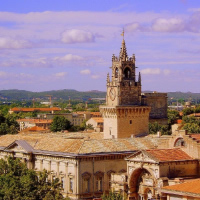 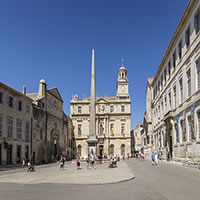 Your Last Day in Orange

Depart your hotel for the airport for your return home. 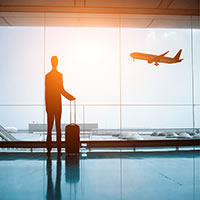