Welcome to Rethymnon! Arrive at your hotel, check in and then grab a bite to eat in one of the many cafes to be found around the picturesque Venetian port, before exploring the rest of this charming city. Your first stop should be none other than the impressive Venetian Fortezza. Enter through an impressive archway where you will see the Ibraham Han Mosque, the Bastion of Santa Maria and the church of Agios Theodoros Trichinas located inside as well as the modern Theatre of Erofili that hosts many cultural events every summer. Next, stop at the Archaeological Museum that is housed in the building opposite the main entrance of the Fortezza. Founded in 1887, the museum exhibits findings from various ancient sites, caves and excavations all over the prefecture of Rethymnon from the paleolithic up to the Roman times.

As you make your way south, try to take in the Contemporary Art Gallery before stopping for refreshments near Rimondi Fountain. Afterwards, pop into the Marine Museum (time and interest permitting) and the Historical and Folklore Museum, established in 1973, whose aim is to collect and study folklore material from the region. Then continue on to the Nerantze Mosque, also known as Gazi Hussein Mosque. Originally a Venetian church dedicated to Santa Maria and later an Augustinian Monastery, it was turned into a mosque during the Turkish occupation, and today houses the Municipal Odeon. Next, visit St. Francis Church before proceeding through the Guora Gate to the Municipal Garden. Located in the heart of the city, and featuring a small zoo, the public park is a lush green area that is a favorite escape of locals and tourists alike.

As evening approaches, head back towards the harbor being sure to stop at the Cathedral and the Ecclesiastical Museum if possible. Time permitting you may also want to stop at the Venetian Loggia where the gift shop of the Archaeological Museum is housed. Then be sure to enjoy a romantic moonlit dinner in one of the restaurants around the harbor. 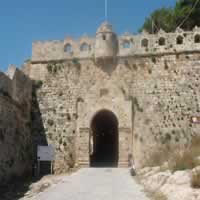 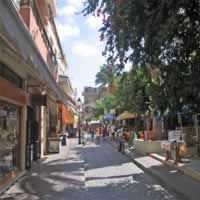 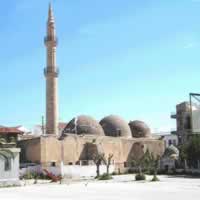 Wake up early this morning and head east to the Monastery of Arsani in Stauromenos. Dedicated to Saint George, this monastery has a small museum with ecclesiastical vestments, Byzantine icons and holy crosses from the 17th century. After a brief visit, continue to Ancient Eleftherna located at the foot of Mount Psiloritis. Eleftherna is one of the most important archaeological sites of Crete whose ruins include a necropolis, sanctuaries, an aqueduct and paved Roman roads dating from prehistoric times up to the early Christian era. Next, visit the Monastery of Arkadi, famous for its role during the 1866 rebellion. The most important part of the monastery is the church dedicated to the Metamorphosis of the Savior and Agios Konstantinos and Agia Eleni. There is also a museum with a nice collection of post-Byzantine icons, blazonry and relics from several revolutions.

In the afternoon, have lunch in Anogia, one of the most picturesque mountain villages on the island. Because of its secluded location, the village has retained its authentic character, local customs, traditional costumes and old Cretan dialect. There are many workshops open to the public where you can see articles being woven on large looms. These woven and embroidered articles have beautiful motifs that are unique to the village. While in town, be sure to visit the 12th century Church of Saint John with its beautiful frescoes and icons. Nearby, you should also see the Cave of Ideon Andron, where, according to mythology, the Greek god Zeus was hidden to protect him from his father Cronos. This cave is an important archaeological site as well and excavations have unearthed a well preserved bronze shield, spears and gold and ivory figures, which are currently displayed at the Heraklion Archaeological Museum.

Later, you may want to stop in the remote village of Zoniana, best known for its interesting Wax Museum. Opened in 1998, it features 87 life size figures depicting the history of Crete and its most famous people, like prime minister Eleftherios Venizelos, writer Nikos Kazantzakis and painter Dominikos Theotokopoulos (El Greco). The museum also exhibits a collection of coins and bank notes, including many drachmas, the official currency of Greece before the Euro.

Finally, unwind and end the day with dinner and drinks at Bali Beach, a charming coastal village nestled in the mountains. Have a swim in its crystal clear waters or just enjoy the peaceful atmosphere and original local taverns and cafes. 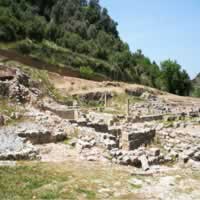 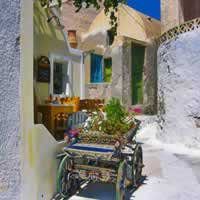 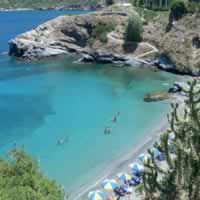 Today we recommend an excursion to Heraklion. Starting at Koules Fortress, which dominates the lovely Venetian harbor, follow the city's medieval walls around, taking in the Historical Museum, Agios Minas and Agia Ekaterini before brushing up on Minoan history at Heraklion's Archaeological Museum.

After lunch, make your way to the excavated ruins of the legendary Palace of Knossos, just outside Heraklion. This is the largest and most famous Minoan site in Greece. Reconstructions of the original courtyards, private apartments, baths and frescos will give you a good idea of palatial life in Minoan times. Legend has it that this palace was the location of the Labyrinth built by King Minos of Crete to keep away the mythical creature Minotaur, who was half bull and half man.

Later, admire the Venetian Loggia that serves as Heraklion's town hall before doing some shopping in the center. Tonight enjoy a bit of people watching while dining in one of the many cafes surrounding Lion's Square (Morozini Fountain). Alternately, you may want to return to the picturesque port in Rethymnon for your last evening. 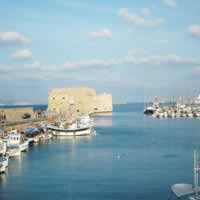 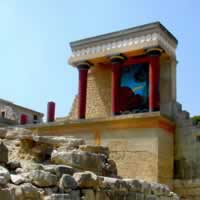 Should you be able to spend additional days in Rethymnon, be sure to visit the historic Monastery of Preveli on the southern side of Rethymnon prefecture. Standing by a bridge over Kourtaliotikis River and surrounded by lush vegetation, it consists of two monasteries, the Lower or Kato Preveli and the Upper or Pisso Monastery of Agios Ioannis Theologos. It was originally built in the 17th century and it played an important role in all the Cretan fights for freedom. Religious garments, frescoes, icons of Saint John and Saint Charalambos and a historical cross that depicts the Baptism of Jesus Christ (and was also used as a banner in wars) can be seen at the Ecclesiastical Museum of Kato Preveli. A short distance away, in the village of Asomatos, you will find the Museum of Papa-Mihalis Georgoulakis, which offers a deep insight into traditional Cretan life. Finally, head to Plakias beach, a beautiful sandy beach with clear waters and many amenities such as chairs, umbrellas, water sports, taverns, cafes and restaurants. Sit back, relax and enjoy dinner and drinks while listening to authentic Greek music.

Another popular beach in southern Rethymnon prefecture is Agia Galini, a small fishing village turned tourist resort lying around the sheltered bay of Messara and opening to the Libyan Sea. This lovely village has plenty of restaurants, taverns, bars, clubs, cafes and shops to occupy your time. And on the eastern side of the bay there are many marine caves hidden in the rocky shores where the rays of the sun create stunning light effects on the blue sea.

You may consider making a day trip to the western prefecture of Chania to admire its Venetian and Ottoman architecture, lovely old town center, harbor and lighthouse, museums, churches and mosques. People watch and soak up the atmosphere from a waterfront taverna overlooking the port. You can enjoy a relaxing day sunbathing on exotic Balos Beach or in the southern part of Chania prefecture, you can visit the Venetian Fortress at Frangokastello. 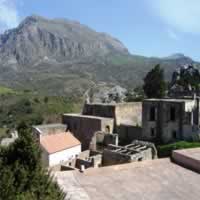 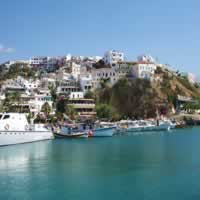 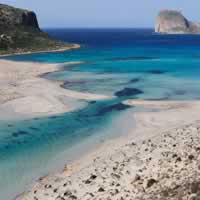 Your Last Day in Rethymnon 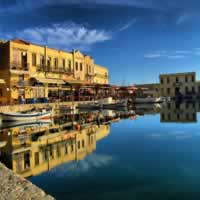