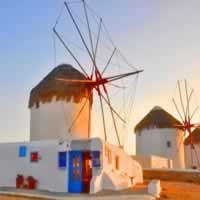 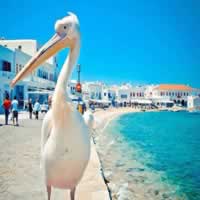 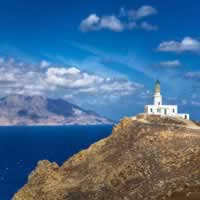 Mykonos Windmills, with their distinctive form and white figure, have been a landmark of the island since the 16th century. Due to the strong winds that have always been present in the region, as well as the privileged geographic position of the island as a trade crossroad, Mykonos used to be a major supplier of refined grain and flour. What used to be a main part of the island`s activity and a force of the local economy, became a sightseeing attraction after the mills stopped working around the middle of the 20th century, courtesy of the industrialization.

There used to be a total of 20 windmills on the island, most of them built in or around the main port, the town Chora and Alefkantra neighborhood. Around half of those were still in good function during the first decades of the 20th century and today only 7 still stand as proud reminiscent of their past. Geronimos Windmill (of private property) remained in operation until 1960`s and is still today in very good shape with a great part of its machinery intact. They are conspicuous by their snow-white color, spherical shape with the customary pointed roof made of the finest variety of wood.

Behind the primary school of Mykonos is the main square of Chora `Laka`, a green oasis in the whitewashed Mykonos town with Eucalyptus and Palm trees and all kinds of shops and eateries around, here also you will find the post office. Walking up from there to the west you will reach the plateau where the famous windmills are located. Being hundreds of years old, most of the windmills have been thoroughly renovated and some have even been converted into museums, the most famous being the Bonis Windmill.

An old celebrity of the town`s waterfront, `Petros` has been the official mascot of Mykonos for many years. You can get a glimpse of the cute creature as it strolls leisurely in own unhurried pace through the city`s many alleyways. It is particularly fond of the harbor area along with Alevkantra. Everyone in Mykonos including visitors adores the pelican. For the children, the pelican is their much preferred playing partner.

Legend has it that more than 40 years back a Mykonian fisherman stumbled upon a wounded pelican. He was so moved by the pelican`s discomfort that he decided to take care of the Pelican, provided the cute creature with medication and once he regained his strength decided to set him free. But surprisingly, the Pelican did not become airborne to his destined abode. Instead he made Mykonos his home. With every passing day, the cute creature became a celebrity. It came as no surprise that when the Mykonos pelican died way back in 1986, the whole of Mykonos went into mourning. It took a person of the stature of Jackie Kennedy-Onassis to come to the rescue of Mykonos grieving populace and the compassionate Jackie Kennedy-Onassis rightfully donated another pelican to the island, Irene. It is said that the Hamburg Zoo had also donated a pelican named Petros. A few years back, there was an instance of another injured Pelican found in Mykonos by the local people who nursed it back to normal. They named the Pelican Nikolas. Nowadays, there are 3 pelicans running around the island, posing for tourists` snapshots only when they feel like it!

Built in 1891, the Armenistis Lighthouse is situated on the north-western tip of Mykonos, overlooking the strait that separates the island of Tinos from Mykonos. Due to its high elevation the view from this location is a particularly memorable scenic attraction. Specifically the lighthouse design is an octagonal cylindrical stone tower with lantern and gallery at an overall height of 62 feet. Its focal plane is 604 feet with a white beacon flash every 10 seconds. The original Fresnel lens when replaced was put into a replica lantern house which is now on display in the garden of the Aegean Maritime Museum in Mykonos Town. At a distance of approximately 4 miles from town, the lighthouse can be reached by taking the north coastal road that passes through both San Stephanos and the Houlakia Bay area.