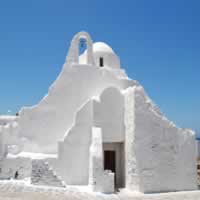 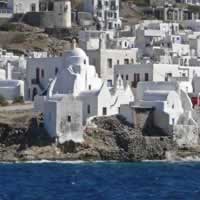 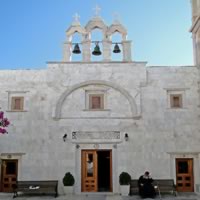 The holy sites of Mykonos offer a unique monumental interest, concentrated around Chora and its nearby villages. Churches and monasteries of all sizes preserving their simple and austere architecture stand proudly at the most privileged locations of the island with a splendid view to the sea. Their construction date begins from the Byzantine times and until the 19th century.

The Church of Panagia Paraportiani Church

The lovely church of Panagia (Virgin Mary) Paraportiani is among the most photographed churches in Mykonos. It is located at the entrance of Kastro neighborhood, right by the sea. First begun in 1475, Paraportiani in reality is a group of five smaller churches which were constructed over a period of time and not completed until well into the 17th century. It is one of the most photographed buildings of Mykonos and an amazing combination of white against the blue of the sky and the sea. Its structure over time has metamorphosized into an organic mass that resembles at one point a sparkling white iceberg stranded on the shore or at other points a huge cake dripping with icing sugar.

This church is the central feature of the `Kastro` or castle area, the oldest section of town. It`s name means inner or secondary door which it was to the Medieval stone walls which encircled the area. The two story structure was molded together utilizing four of its churches to form a base for the fifth church which when placed on top formed a central domed roof. If you keep on walking through the winding small streets of Little Venice towards to the north, soon you will find the Paraportiani church another famous landmark of Mykonos.

The Monastery of Panagia Tourliani

Located 5 miles for Chora town, in Ano Mera village, the monastery was originally built in 1542 by two priests and was initially named after the Presentation of the Virgin Mary. It was restored in 1767 and took its present name after an icon of the Virgin Mary found in the nearby area of Tourlos. From then, Panagia Tourliani became the patroness of the island and is celebrated on August, 15th. The architecture of the monastery is rather impressive, with a whitewashed exterior and a colored dome. A beautiful marble fountain is found in the yard outside the church. In the interior of the church is an impressive wooden iconostasis (altar screen) made in 1775 by Florentine artists. There are icons of apostles and saints on the iconostasis as well as scenes from the New Testament. The screen is decorated with green, red and golden flowers. The hanging incense holders are decorated with silver dragons having red eggs in their mouth, which show the Eastern influence. The monastery also has a small ecclesiastical museum which includes wood carvings, embroideries, vestments, holy icons and the first bells of the monastery. To the southeast of the Monastery of Panagia Tourliani, about 1 km away, you will find the Monastery of Paleokastro, built in the 12th century and also worth to visit.

Located north of Ano Mera, on the hill where a medieval castle (the second largest ancient settlement on Mykonos) once stood. It is on one of the greenest spots of the island. It is a nunnery (female monastery) and dates from the 18th century. Its architecture is typical Cycladic and it took its name from the remains of the Gizi Castle, which is also known as Paleokastro (meaning Old Castle). The monastery is close to one of the two ancient towns of Mykonos. A few yards away is a church dedicated to Saint Vlasis that is distinguished for its beautiful large pigeon house and a prehistoric tomb consisting of a giant granite rock that rises 10 feet above the sea level.

The Catholic Church of Panagia Rodario

The Catholic Church of Panagia Rodario is located in Alefkandra square, close to the windmills above Chora town. This is the only Catholic Church on Mykonos and serves the Catholics that live permanently on the island and the thousands of foreign tourists that visit Mykonos every summer. Constructed in 1668, the church was renovated in 1677. The icon over the Holy Table presents Virgin Mary and baby Jesus between Saint Domenicus and Saint Catherine of Sienna. This icon was transferred to Mykonos from Venice in 1715. This is when the floor of the church was covered with marble and a gold-plated arch was put around the icon, after a donation of a local woman. Unfortunately, part of the church was destroyed in a big fire in May, 1st, 1991. The icon of the Virgin was seriously damaged but it was transferred to Tinos and repaired. In October 1997, the church was ready to work again. Today, there are Services every Sunday evening for the Catholics of Mykonos and Holy Masses are held in Christmas and Easter.