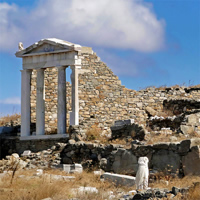 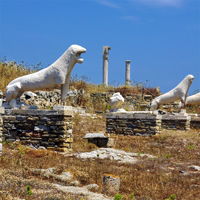 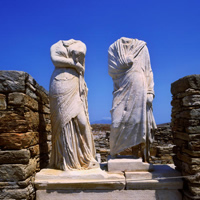 One of Greece`s most famous archaeological sites is the small island of Delos. On Delos are found the admirably well-preserved ruins of one of the largest, most significant, and best- organized ancient Greek settlements. Under the jurisdiction of Mykonos and situated just one and a quarter miles to the west, the entire island has been declared a national museum. In 1990 Delos was included in the World`s Cultural Heritage, protected by the UNESCO.

Getting there
Situated only 1 and a quarter miles from Mykonos (less than half an hour by boat). Delos can only be accessed from the main harbor of Mykonos, with little boats `kaikia` that make daily excursions. Both the mooring of private boats there and staying past sunset without official permission are strictly forbidden. The guided excursions on the island and around the archaeological sites usually last 3 hours and the last boat from Delos back to Mykonos leaves at 3 o`clock in the afternoon. Make sure you catch it!

What to see
Large-scale restoration work has been undertaken by the French School of Archaeology mainly in the sector of the private houses, but in the recent years, the 21st Ephorate of Prehistoric and Classical Antiquities has also carried out similar work. Several columns have been rebuilt and ancient houses have been roofed in order to protect the mosaic floors (House of the Trident, House of the Masks, House of Hermes).

The archaeological site covers almost the entire island, starting on the west side, where the sacred harbor was. From the harbor, a majestic sacred way led to the Sanctuary of Apollo, where there were temples, altars, votive offerings and other buildings. There are ruins of four temples to Apollo, one of them known as the Temple of the Athenians.

To the east is the Sanctuary of the bulls, an oblong building, and to the north are the Treasuries and the long and narrow Stoa of Antigonns. In the north-west corner is the much smaller Sanctuary of Artemis, with an Ionic temple to the goddess, and the Tomb of the Two Hyperborean Maidens. Still further north is the region of the sacred lake, with the Terrace of the Lions, the Letoon, the Agora of the Italians and the Institution of the Poseidoniasts of Berytos. A little further along are some fine examples of houses and a palaestra. To the north-east of the lake is the Stadium and the Gymnasium. Some of the houses yielded superb mosaic floors with representations of Dionysus, a dolphin and a trident. A narrow channel separates Delos from Rhenia, where there is an important burial ground.

The Museum of Delos has sculptures of the Archaic, Classical, Hellenistic and Roman periods, together with a collection of vases from various periods.

History
Delos is the Sacred Island of the Ancient Greeks, which according to mythology, was revealed among the waves of the Aegean to Leto, who was being chased by the jealous Hero; it was the refuge where she gave birth to Apollo and Artemis.

The island was first settled, probably by the Kares, about the 3rd millennium B.C. In the beginning of 8 B.C. it developed into a center of worship and was the capital city. At the end of 6 B.C., the Athenians took over the island: In 540 B.C. Peisistratos ordered the first purification of the sanctuary. As a result of the second purification (426 B.C.) the entire contents of all the islands graves were removed to neighboring Rhenia. Afterwards in order to prevent desecration of the sanctuary, both births and deaths were forbidden on the island of Apollo. The Athenians consecrated the first `Delia` dedicated to Leto, Artemis, and Apollo. In 315 B.C., when Macedonians arrived on the island, Delos achieved its independence and developed commercially.

During the Roman period, the island thrived, until 88 B.C.; the population included Egyptians, Syrians and Italians. Then, after two dreadful attacks during the Mithridatic War, Delos went into decline. In the 2nd and 3rd centuries A.D. only a small settlement existed on Delos and, as Christianity had gradually replaced the ancient religion, the island finally lost its importance. It was finally abandoned in the 6th century AD.

In the 1873 the French Archaeological School of Athens started excavations and restoration enabling the wealth of the islands history to be revealed to everyone. The Archaeological Museum of Delos houses one of Greece`s most significant collections, including rare exhibits of ancient sculpture, ceramic vessels, epigraphs and wonderful mosaics etc.

Intensive excavations were conducted in the years 1958-1975. The excavations are still carried out by the French School of Archaeology, but the religious, political and commercial center of the island has already been revealed along with many private houses. Restricted excavations were also conducted by Greek archaeologists at the beginning of the century.