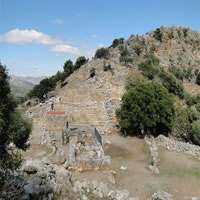 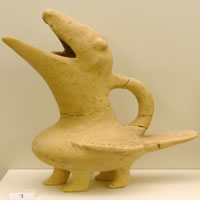 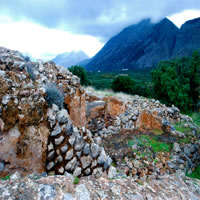 This important Minoan settlement lies on a low hill by the sea. It has a large harbor and was the center of an area bordered by Chamaizi to the west, Praisos to the south, and Analoukas to the east. Despite evidence of habitation since the last part of the Neolithic period (3500 BC), the first settlement dates back to the Early Minoan II period (2600-2300 BC). It remained inhabited until 1450 BC, when it was destroyed, along with other Minoan centers. The settlement flourished during the Old Palace period (2000-1650 BC), when the central building of palatial character was built on the hilltop. The remains of the town are still scattered on the hill and extend around a central building. The houses contained storerooms and workshops on the ground floor, while the upper floor consisted of the actual living quarters. Two completely excavated houses date to the New Palace period. One was abandoned during the Late Minoan Ia period (1500 BC) and the other was destroyed by fire a little later (1450 BC). The central palatian building, which is also worth visiting, covers an area of 3,000m² and is constructed on two terraces, on an artificial plateau on the hilltop. The building was surrounded by a retaining wall with a tower-like bastion. To the west of the building was a garden which separated the main part of the buildings from the workshop areas.

Gournia, the ancient name of which is unknown, is the most characteristic of the excavated medium-size settlements, dating to the period of the peak of the Minoan culture (1550-1450 BC). The site is located at the Isthmus of Ierapetra, close to Pahia Ammos beach and occupies a low hill, close to the sea. The first inhabitants settled here in the Early Minoan III period (2300 BC). Remains of the Middle Minoan period (2000-1600 BC) are also preserved. In 1600 BC, the palace was erected, but was destroyed along with the surrounding town in 1450 BC, at the same time with all other palatial centers of Crete. Fifty years later, the site was partly resettled and was finally abandoned in around 1200 BC. Today, the most important monuments of the site include the unfortified town on the slopes of the low hill, the town of Gournia offering a view in the everyday life of Minoans, as well as the palace (seat of a local ruler) on the hilltop.

This small island, close to Sitia, was inhabited from the Early Minoan (3000-2200 BC) until the Early Christian period. It was a main place of sponge collection and processing of murex shells, which were the resource of the precious and expensive purple dye. The most important monuments of the area include a theatre (on the northeast part of the island), the Public Baths, the Settlement which extends to the southeast of the theatre, the Temple on the southern part of the island and the caves on the west coast. Those caves have been used as chapels and preserve an engraved representation of saints, and Latin inscriptions.

Lato was one of the most important Doric city-states in Crete, although it must have existed before the `Coming of the Dorians`. It is built on a saddle between two hills, at a site protected by possible attacks but also with a splendid view over a large area of the Mirambello Bay. It was named after Leto, mother of Apollo and Artemis, although the main goddess of worship in the city was Eileithyia, who was also depicted on the coins minted here. Before the end of the 3rd century BC, the inhabitants of Leto participated in the League of the Cretan cities and shared the same laws. Lato formed alliances with Rhodes, Teos, and king Eumenes of Pergamon. However, it was locked in conflict with the neighboring city of Olous, due to a border disagreement. The most important monuments of the site include the fortified city on the saddle between two hills, the Agora, including a deep square cistern and a small rectangular temple, the Prytaneion, (a monumental complex, reminiscent of an ancient theatre), and the Temple (south of the Agora).

On a small headland called Trypetos, 1 mile to the east of modern Sitia lies a city of the Hellenistic period (middle of the 4th quarter of the 1st century BC), most probably the ancient city of Itea. A Hellenistic dockyard has been unearthed at the east coast of the headland. In 1960, the landowners created arable plots using machinery that caused severe damage to the buried antiquities. The Hellenistic city covers the whole of the headland and was built on terraces, following the terrain. The south side was protected by a massive wall, separating the main area of the headland from the mainland. Along the inner side are rooms and other structures, parts of houses and military installations. The most important room seems to be a hall, at the center of which lies a rectangular hearth, formed by the surface of the bedrock, enclosed by porous slabs. Among the most important finds is a series of coins by this city, which had its own mint.

The palace of Zakros is the fourth in terms of size, among the Minoan palaces. It was located at an advantageous strategic position, a protected bay, and was the center of commercial exchange with eastern countries, indicated by the excavation finds. Two main building phases are identified: the old palace was built in 1900 BC and the new one was built in 1600 BC, but was destroyed in 1450 BC along with the other centers of Minoan Crete. The palace was the administrative, religious and commercial center, and was surrounded by the town. Today, the monuments in the area include the palace and its annexes which cover a total area of more than 26,000m², a stepped corridor, the west wing, which was devoted to religious activity, the east wing which included the royal quarters and the administrative center, the south wing which included a small complex of workshops for the production of perfume oils and small objects of faience, rocky crystal etc, and finally the north wing, which includes a large staircase leading to the upper floor, the `magazines of the royal quarters,` a bath complex and a spacious room, accessible from a corridor, interpreted as a kitchen which served the banquet hall on the upper floor. The palace was surrounded by the town, although the buildings in the immediate vicinity of the palace are actually annexes serving its organized life. The main area of the town had a complex network of stone-paved streets, forming large building blocks, each consisting of 2-4 small houses, with many rooms and two or three floors.