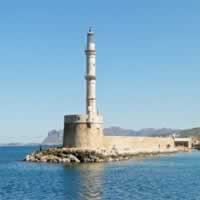 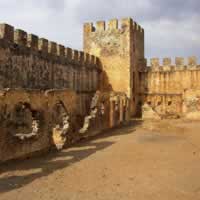 On the western side of Crete, on top of the remote island of Gramvoussa, there is an impressive castle dating from the medieval times. This castle was constructed in 1579 by the Venetians. The shape of the castle is irregular with walls and ramparts from three sides, with unapproachable rocks on the northern side. The only way up to the castle is from the eastern side, where there is a narrow track leading to the main gate. This abrupt location was the reason that made the castle an important strategic point. From the Castle of Gamvoussa, also known as the Castle of Pirates, the Venetians could control the seaway between Crete and Antikythira, guarding the island from pirates and enemies. In 1692, the castle was handed by betrayal to the Turks, who kept it under their occupation till the Greek revolution of 1821. This is when the castle was occupied by the Greek revolutionists, who gradually became pirates and made raids for finding food. Inside the castle walls, there are underground cisterns, ruined buildings, a church dedicated to the Annunciation of Virgin and a powder storage that was later used as a mosque. The way up to the castle is difficult due to the rocky landscape, but the view to the Aegean Sea is breathtaking.

The port of Chania is one of the busiest places during the day and the most romantic spot at night. The beautiful Venetian lighthouse is ideally located at the extreme end of the pier, at the entrance of the port and is considered to be the symbol of Chania. Initially the lighthouse was built by the Venetians in 1570 and was reconstructed for the last time in 1830. Made of stone blocks, it is conspicuous by its rectangular shape. The lighthouse is no longer operational but it is still one of the top attractions of Chania for its magnificent architecture and historical interest. At night the lighthouse shines in the dark and it makes for a truly kaleidoscopic vignette. Visitors can walk along the Venetian walls but it is not allowed to enter its interiors. The view from the port of Chania is absolutely amazing.

The Hammams in Chania were built by the Turkish Empire after they took over the city in 1645. One Hammam is located on the corner of Zambeliou and Douka streets in the Old Town. It initially had six large drum less domes to which another floor was later added. The glass, bell shaped "eyes” that decorate the dome are the only source of light besides the three arched windows on the northwest side. It is relatively simple and its structure is characteristic of traditional Turkish Hammams. Today, the hammam is property of the Ministry of Culture. Another hammam is situated on Halithon Street, which was built on the site of the Venetian Monastery of St Clara, near the place where a Roman Bath used to be, and is decorated with beautiful mosaics. It is a multiple-domed structure with an arcade on the perimeter, which was eventually demolished in 1941.

These hammams or public baths constitute a very old Moslem tradition. The hammams played an important role in Middle-eastern Culture and served as places of body cleaning and social gathering. Body hygiene was closely associated with worship and meditation (according to the Koran, only running water could purify). The hammams in the Ottoman culture began as structural elements attached to mosques and later evolved into institutions and eventually into monumental structural complexes. A hammam consists of three interconnected basic rooms: the sickaklik which is the hot room, the tepidarium, the warm room and the sogukluk which is the cool room. The sickaklik has a large dome structure fitted with small glass windows that give a half-light effect. This room also contains a large marble stone at the center on which customers lie on, and niches with fountains in the corners. This room is used for soaking up the steam and getting scrub massages. The warm room or the tepidarium is for washing with soap and water. The soðukluk or the cool room is used to relax, dress, have a drink, usually tea and sometimes if it was available, the customers could nap in private cubicles after the massage. Hammams were not exclusive to men; they had separate quarters for men and women. In the Ottoman Empire, Hammams were quite abundant as they were considered to be the social centers. They were a part of daily life and were populated on almost every occasion with traditional entertainment and ceremonies, such as before weddings, high holidays, beauty trips and celebrating the birth of children.

The famous Gorge of Samaria

The Gorge of Samaria lies on the southern side of Chania prefecture and is a wonderful place for hikers. Visitors from all over the world attempt trekking at this gorge. In 1962, Samaria Gorge was declared a National Park for the survival of the endangered species kri kri, the rare Cretan wild goat that lives only in Samaria. Apart from the kri-kri, many other endemic and rare species of flora and fauna live in this gorge. A small village used to be there, Samaria village, but it was abandoned by all its inhabitants in 1962, to make the gorge a national park. It is 10 miles long and it is said to be the longest gorge in Europe. It was created by a river that runs between the enormous White Mountains and Mount Volakias. The gorge begins below the northern side of Omalos Plateau and ends in the shores of the Lybian Sea, at the village of Agia Roumeli. The actual distance of this long trek in the park itself is 8 miles, but from the exit point of the park one has to walk another 2 miles to reach the village of Agia Roumeli, from where one can get transportation services. At the highest points these looming mountain walls reach to a height of 1,600 feet above sea level. The time taken to complete the trek differs from 4 to 7 hrs, depending on the capacity of every trekker. This gorge is only open from early May to late October. The park remains open from 7 am to 3 pm. After 3 pm till sunset, you can only walk 1 mile, either from Xyloskalo or from Agia Roumeli. You have to be in good physical condition to take on this trekking path because it can be very exhausting, especially in summer when the sun is burning hot. The best time to visit is in spring, when the weather is cool, the nature is at its best and visitors are far fewer than in summer. As the gorge is a national park, it is not allowed to swim in the streams, camp, light fires, hunt or stay overnight. There are operators and guides to organize trips from Chania Town to Samaria Gorge or you can take the public urban buses from Chania Town to Omalos. The last boat from Agia Roumeli to Sfakia leaves at 5:30pm. The bus from Sfakia to Chania Town laves at 6:30pm and the driver waits for the boat from Agia Roumeli to come before the bus departs.

The Monastery of Panagia Chrissoskalitissa

The historical Monastery of Panagia Chrissoskalitissa is located on the south western side of Chania, on the way to Elafonisi village. It is actually a lovely traditional settlement with a few permanent inhabitants. The white monastery lies on top of a cliff right above the beach of Elafonisi and is dedicated to the Virgin Mary. Its name Chrissoskalitissa means golden steps and the tradition has it that one of the 90 steps that lead to the monastery is golden but only people with pure heart can see it. This monastery was built during the Venetian times on the site of Agios Nikolaos monastery but its exact date is still unknown. During the Turkish occupation of Crete, it was deserted and only a few cottage houses were found in the area. At that time, the monastery was a shelter for seamen who were caught in storm. The Monastery was reinhabited again in 1855, when a monk from Askifou renovated the building and built new cells. Since then, the Monastery of Chrissoskalitissa is continuously inhabited. Today, it is a famous pilgrimage site and its rooms are open to the public including a folklore museum displaying items of daily use, instruments, tools and memorials of the Cretan Revolution.

Frangokastello is an important historical monument in the region of Chania. This castle was built around 1371-1374 BC. The construction work started by the Venetians, who had conquered Crete that time. In fact, this castle was set up to maintain a military base for the Venetian army. At first, the castle was named Castle of Saint Nikitas, but was renamed Frangokastello by the locals, which means the Castle of the Franks (Venetians). The Venetians constructed Frangokastello in a rectangular shape. They built strong and massive towers at each of the four corners. On the gigantic gate, they built a coat of arms symbolizing the Venetian bravery. However, all the buildings and fortifications that we see today inside the castle walls were completed by the Turks during the Ottoman rule (17th-19th centuries). Another legend connected to Frangokastello is the story of Drossoulites. In 1828, the Cretans had revolved against the Turks and 600 men from had come to help the Cretan Revolution. In May 1828, they locked themselves in Frangokastello. Outside the walls, there were 8,000 Turkish soldiers fighting them. After a week, in May 17th 1828, the Turks managed to enter the castle and 335 Greeks were killed. However, their bodies were left unburied, until a strong sand dune covered them. The local legend says that since then, every May, the dead soldiers of Dalianis appear again. They rise from the sand and go towards the sea, where they disappear in the water. This always happens in May, very early in the morning, about 10 minutes after sunrise. As these ghosts appear with the morning dew, they have been named Dew Men, or Drossoulites in Greek. Scientists say that they are reflections of the sun rays, however many people have reported seeing these ghosts.