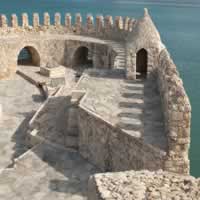 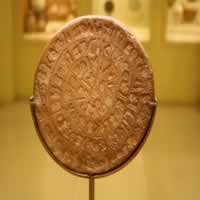 2 Xanthoudidou St. and Xatzidaki
The Heraklion Archaeological Museum is one of the largest and most important museums in Greece; it is considered as the museum of Minoan culture par excellence worldwide. It houses representative artifacts from all the periods of Cretan prehistory and history, covering a time span of over 5,500 years from the Neolithic period to the Roman times.

The permanent exhibition includes unique works of Cretan art, found in excavations across the central and eastern part of the island, which roughly span 5500 years, from the Neolithic (5000 BC) to the Late Roman period (late fourth century AD). Most objects date to prehistoric times and to the so-called Minoan period, named after the island`s mythical king, Minos. They include pottery, carved stone objects, seals, small sculpted items, metal objects and wall-paintings discovered in palaces, mansions, settlements, funerary monuments, sanctuaries and caves. The Museum is unfortunately closed due to renovation works but thanks to a temporary exhibition you can still admire 400 of its most important artifacts. Shortly it will re-open in its complete renovated form.

Phaistos Disc, a round clay disc with hieroglyphics and ideograms inscribed on it, is certainly one of the most impressive artifacts of the Museum. The snake goddess, the Minoan Frescos, like "La Parisienne”, the King Minos ring and the famous "Bees” jewel are among the most mesmerizing exhibits.

The magnificent Cretaquarium is located in Gouves, just a a couple of miles from Heraklion Town and the beach of Hani Kokkini. This is the largest aquarium in the Mediterranean founded in 2005. The Cretan Sea has always been known for the huge diversity of marine life and the beautiful rock formation. Crete Aquarium depicts marine life with upgraded and impressive presentations of natural landscapes, offering visitors a chance to see rare sea living creatures. In the aquarium, there are more than 100 different areas for 2,500 Mediterranean and tropic sea creatures and species. From large predatory sharks to tiny sea horses and spectacular jellyfish, the diversity of marine life is presented against a backdrop of Cretan underwater seascapes, such as the rocks at Mátala (South Crete) and the seabed at Vái (Southeast Crete). It has large halls equipped with the latest audio-visual systems for exhibitions, speeches and conferences. Documentaries about the marine ecosystem are also screened throughout the day. Alongside the educational aspect, Crete Aquarium offers important insight into the marine ecosystem and the extensive range of creatures. It is open daily throughout the year.

The Venetian Castle of Heraklion is called Koules, which means fortress in Turkish. It is an impressive fortress that surrounds the harbor. The Koules Castle is a massive fortress with two storeys that used to guard the entry to the port. The Castle was constructed by the Venetians in the early 13th century, when they conquered the town. The Fortress was primarily built for the storage of food and the military supplies. It also served as the quarter for the officers and as a prison. A devastating earthquake completely destroyed the Castle in 1303 and it was rebuilt by the Genoese. The fortress was again restored during 1523-1540 and got its ultimate form.

During the Ottoman rule, the Castle was transformed to a prison, several Cretan heroes, who revolted against the Ottomans, where imprisoned and killed in the dark dungeons. The architecture of the Castle is the typical Venetian style. The construction was such that the walls of the Castle could protect the breakwater of the harbor. The Castle was made of stones. The ground floor has a vaulted roof with broad fanlight. The walls were very thick and were divided into 26 apartments serving as the residence of Kastelanos, the officer responsible for the well-being of the castle, as well as the dwellings of the captains and other officers. A part of the ground floor was also used as the storeroom. There were three carvings of the Lion of Saint Mark in the Castle. The one at the sea side of the castle exists to this day. The upper floor and the basis of a minaret were added to the original construction by the Ottomans. Today the Koules Venetian Castle has restored and is considered the trademark of Heraklion Town.

The Caves of Matala

The village of Matala, the most ancient village in Crete lies about 43 miles south of Heraklion. Matala was the ancient port of Phaestos and Gortyn and a former fishing community. The remains of the ancient city have stayed submerged under the sea. It was built on the coastline of Messara bay inside a small and beautiful inlet. There is a nice, long sandy beach which is famous for its artificial caves that are carved into the rocks located to the north of the coast. These caves were first inhabited during the prehistoric period. Initially, they were used as dwellings and places of worship. They were later used as tombs during the 1st and 2nd Century. The tombs found here date back to the Greek, Roman and Early Christian Times. The 1960s and early 1970s saw an increase in the number of foreigners who visited the caves. During the 1970s, the caves became home to an international hippie community. Great musicians like Cat Stevens and Joni Mitchell have lived here using the breathtaking beauty of the area as an inspiration to come up with equally beautiful songs. In fact, Joni`s 1971 song Carey talks of her experiences with the hippies in Matala. However, the locals never having seen tourists before did not approve of the hippie settlement and wanted them out of there. Eventually, they were successful in driving the hippies out.

To the south of the caves there is a huge rock formation known as the rock of Theosyni offering a beautiful view of Messara Bay. The rock forms a marine cave under the sea called Kouropi that shelters wild pigeons and Mediterranean seals. Today the Matala Caves are protected by the Archaeological Service. Entering the caves costs about two Euros but overnight stays are not allowed anymore. Although the people visiting the place are no longer free spirited hippies, the caves should be visited for their sheer beauty with the surrounding turquoise blue sea, the sand and the red sun setting into the horizon.