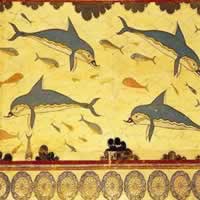 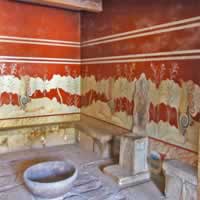 Three miles south of Heraklion lies Knossos, one of the most important archeological sites in Europe, the legendary centre of the Minoan civilization from 1900 to 1400 BC. Knossos is the largest of the preserved Minoan palatial centers and the site of the most important palace of the Minoan civilization. According to tradition, it was the seat of the legendary king Minos. The Palace is also associated with thrilling legends, such as the myth of the Labyrinth with the Minotaur, and the story of Daidalos and Icaros. It is hauntingly complete, with brick-red columns, palace chambers, still-explorable Labyrinth, and its million hints of an advanced civilization to rival Ancient Egypt, its closest neighbor.

The Palace of Knossos witnessed two architectural phases then was devastated by the earthquake of Santorini (1450 BC). The site was continuously inhabited from the Neolithic period (7000-3000 B.C.) until Roman times. The Linear B tablets (Mycenaean script) of the 14th century B.C. mention the city as ko-no-so. The site contains the remains of the palace of Minos, of dwellings occupied by officials, priests and residents, as well as of cemeteries. The Palace was an intricate building complex built around a central court. It was laid out on a surface of 72,000 sq feet and apart from the royal apartments; it encompassed ceremonial quarters, treasure rooms, workshops and storage spaces.

Intensive habitation occurred mostly in the Minoan period, when the so-called first (19th-17th centuries B.C.) and second palaces (16th-14th centuries B.C.) were built along with luxurious houses, a hospice and various other structures. After its partial destruction in 1450 B.C., Knossos was settled by Mycenaeans from the Greek Mainland. The city flourished again during the Hellenistic period (sanctuaries of Glaukos, Demeter, other sanctuaries, chamber tombs, north cemetery, and defensive towers) and in 67 B.C. it was captured by the Roman Quintus Caecilius Metelus Creticus. The "Villa of Dionysos", a private house with splendid mosaics was built in the same period.

The Minoan Palace of Knossos
The Minoan Palace at Knossos is over 65,000 square feet and the largest of all Minoan palatial structures. It was built of ashlar blocks, had many floors and was decorated with really beautiful frescoes. The old palace was built around 2,000 BC but was destroyed by an earthquake in 1700 BC. The newer, more complex palace, was built almost immediately after the first one was destroyed. In the middle of the 15th Century BC, the Achaeans took over the island of Crete and settled in the palace. The palace was once again destroyed by fire in the middle of the 14th Century B.C and henceforth ceased to function as a palatial centre. The first excavations that brought to light parts of the palace were carried out by Minos Kalokairinos, a Cretan merchant and antiquarian in 1878.
Legend has it that this palace was the source of the Labyrinth myth. It was a structure that was made by King Minos of Crete, to keep away the mythical creature Minotaur, who was half bull and half man. Eventually the creature was killed by Theseus.

Structure of Knossos Palace
The original layout of the palace cannot be seen anymore because of the subsequent modifications. There are about 1,300 rooms connected to each other with corridors of different sizes. The palace had four wings arranged around a central court, each one with its own entrance. The east wing housed the residential quarters, the workshops and a shrine. At the west wing were the storerooms, shrines, and the repositories. On the upper floors were the throne room and the banquet halls. The north wing consisted of the Customs House with a lustral bin and a stone built theatrical area. At the south wing was the South Propylon which could be said that is the most imposing building.

Water management
The palace had three separate liquid management systems, one for supply, one for drainage of rain water and one for drainage of waste water. Aqueducts brought fresh water to Kephala hill which branched to the palace and to the town. Water was given to the palace by gravity feed through terra cotta pipes to fountains and spigots. Sanitation drainage was being done through a closed system leading to a sewer near the hill.

Lighting and heating
The palace was designed in such a way so it could take maximum advantage of natural lighting during the long days of summer. The rooms were built around courtyards in order to give more window openings. The doors of the rooms were polythyra or multi-door to provide more door opening and the stairs were around light wells and corridors as open porticos wherever possible. Thus the architectural style solved much of the lighting problems. However the ample open spaces must have posed quite a problem for the palace especially during winter. There is no evidence of central heating. It is assumed that each room must have had its own heating system. For heating, they used fixed and portable ceramic hearths as well as fires lit by charcoal.

Red columns
The palace is distinguished for its red columns. While most Greek columns are smaller at the top and wider at the bottom, the Minoan columns are the opposite with a smaller base and a wider top. The columns at the Palace were mounted on stone bases and had round pillow like tops.

Frescoes
The walls of the palace were decorated with many frescoes. The remains however were only fragments and needed reconstruction which was taken over by the artist Piet de Jong.

Throne Room
The Throne Room has an alabaster seat used as a throne and built into the north wall. There were gypsum benches on the three sides of the room with a tub area or lustral basin used for ceremonial purification opposite the throne.