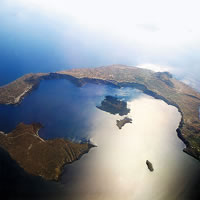 The Santorini Caldera undoubtedly is one of the natural wonders on planet earth. The volcanic explosion that occurred here 3,500 years ago forever changed the topography of the Mediterranean coast. The caldera of Santorini is actually a basin, four miles in diameter. The landscape consist of steel rocks and cliffs that tower above. It is more than a thousand feet above the sea level and extends underneath the sea for an additional thousand feet, thereby creating a perfect harbor. The caldera has an elevation, which varies between 500 to 1,200 feet. The distance from one end of the island (Cape Exomitis) to the other end (Cape Mavropetra) is 11 miles.

Up to about two million years ago, Santorini was a small non-volcanic island. Remains of this can still be seen at Mount Profitis Ilias in the southeast of the present island, which is made from non-volcanic limestone. About two million years ago, volcanoes under the sea to the west of the island started producing magma, resulting in a number of small islands. Eventually (around 500,000 years ago) there were two giant `shield volcanoes`. These mountains united with the non-volcanic island to make one big island. Although neither of these mountains exist any longer, geologists have given them names. The northern mountain is called Mount Peristeria while the southern one is called Mount Thera.

About 200,000 years ago Mount Thera started to produce vast amounts of magma and ash, eventually completely emptying the magma chamber under the mountain. The structure of the mountain was not able to support itself and it went crashing downwards into the empty magma chamber, leaving a caldera - a wide, deep hole in the ground. This process was repeated in a whole series of eruptions over the next 200,000 years, with both mountains producing magma, collapsing, re-growing and collapsing again, each time deepening the caldera and eventually leaving the island in the shape it is today.

Caldera nowadays covers approximately 32 square miles and the water`s depth varies from 1000 to 2000 feet. At the western end of the caldera, is the island of Therasia and of Aspronissi. By taking a good look at those three islands we can easily distinguish a virtual borderline of what used to be there before the caldera was formed.

To the northernmost part of the Caldera is the town of Oia. The capital city of Fira is ideally located to the eastern elevation of the Caldera. Today, the caldera of Santorini is one of the most important geological configurations on planet earth and rightfully, it has been the subject of higher research in the domain of Geology as well as Archaeology.