SANTORINI AND THE MYTH OF ATLANTIS 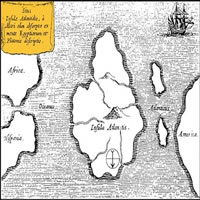 The mystery of the lost Atlantis is one of the most popular myths in the world. However, no one could ever prove that this island truly existed as described by many scientists and philosophers. Some support that the catastrophe of the Minoan civilization and Ancient Thera (Santorini) are strongly connected with the lost Atlantis, but there is no proof.

The story of Atlantis was conveyed to Solon by Egyptian priests in one of his trips in Egypt, as says Plato. Likewise, Plato describes the story of Atlantis in his dialogues Critias and Timaeus. Among the impressive things that Solon heard from the priest was that the Atlantians originally had divine powers but gradually lost them. As they were left only with human powers, they decided to go against other prosperous islands. So, they traveled all around the Mediterranean and conquered many places, until they were defeated by the Athenians. Eventually, the anger of the gods for the arrogance of the Atlantians lead to their punishment and vanished Atlantis in one night, leaving only masses of mud behind.

As historians have noticed, the Minoan settlement of Akrotiri, discovered on the island of Santorini, was a developed settlement which was destroyed around 1,500 BC due to the strong eruption of Santorini volcano. The strength of this volcanic eruption was so powerful that the tsunami waves in the Aegean Sea reached and destroyed the Minoan settlements of northern Crete. The description of Plato for the destruction of the mythological island of Atlantis has many common points with the story of the Minoan Akrotiri, which also disappeared without leaving any trace. Assuming that Atlantis was actually Akrotiri, that was covered by the volcanic ashes of Santorini, means that the island was actually the lost Atlantis. Moreover, archaeologists point out the fact that Ancient Thera (Santorini) had a flourishing economy and the Minoans were great seafarers who carried out trade and commerce with other Mediterranean countries.

Scientists have today concluded that the mystery of Atlantis island is just a myth with countless unanswerable questions and it is possible that Atlantis never existed. However, this myth has raised many arguments and has inspired much conversation.