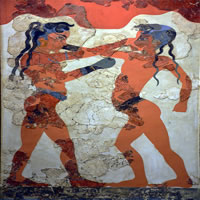 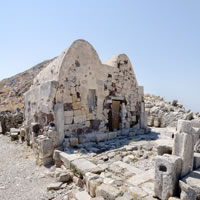 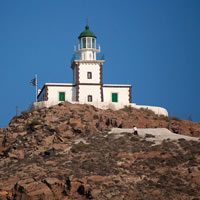 The site of Akrotiri had been closed for many years but it reopened to visitors in April 2012. It is one of the main attractions of Santorini. Located on the southern side of the island, between the village of Akrotiri and the famous Red beach, this site is visited by thousands of visitors every year.

Excavations on Akrotiri started as early as the 1870s by the French Archaeological School of Athens. Few years later in 1866, the first traces of an ancient settlement had been accidentally revealed, during the works to get volcanic soil from Santorini in order to insulate the Suez Canal Bridge. In the century that followed, many excavations were conducted until the excavations of archaeologist Spyridon Marinatos started in 1967. The works revealed a fully-working and developed settlement. Archaeologists believe that the town was originally constructed around 4,500 B.C. but in the 17th century B.C. it was destroyed by an earthquake. A new town was built on the ruins of the old town, until it was also destroyed by the volcanic eruption about one century later. The location of the town was ideal, as it served as a safe port and thus it developed an important commerce activity. The urban planning was dense, the buildings had many stores, the walls were decorated with amazing frescoes, the streets were paved and there were also squares and storehouses. The frescoes depict a rich middle society, where people were dressed luxuriously and elegantly.

The enormous volcanic eruption that destroyed the settlement of Akrotiri took place around 1,650 B.C. The entire town was covered with ashes and lava, which preserved Akrotiri almost intact through time. As no human bodies have been found covered by lava, as is the case in Pompeii, archaeologists believe that precursory earthquakes made the residents leave before the volcano erupted. Also not many valuable items were excavated, which shows that between the earthquakes and the big volcanic eruption, the residents had returned to take their personal belongings. This time interval between the precursory earthquakes and the eruption is estimated at about 10 days. In any case, the time between the first eruptions and the geological formation of the caldera is estimated no more than 2-3 days. The eruption took place probably in spring because flowers of olive trees were found under the lava ashes. This was the most important eruption in the world for the last 10,000 years and the tsunami waves that raised also destroyed the Minoan town of Knossos in Crete. In September 2005, an accident took place in Akrotiri: the wooden shelter of the site collapsed, killing a British tourist. Since then, the site had been closed till April 2012, when the new bioclimatic shelter was finished and Akrotiri opened again to visitors.

Thera is ideally perched on a rocky promontory which is popularly referred to as the Mesa Vouno, nestled between two picturesque beaches. In terms of natural beauty, Ancient Thera is breathtaking with sea cliffs plummeting abruptly on the three sides while there are the bewitching panoramic vistas of the neighboring islands that provide a truly inspiring backdrop to Ancient Thera.

The Ancient Thera site has a wide range of vestiges belonging to various historic periods of the Aegean civilization. Here you will find impeccable Roman Baths brushing shoulders with elegant Hellenistic shops. There are also the remarkable Byzantine Walls to see on Santorini. As a visitor you may not be able to make sense of the stupendous diversity that is on offer at the Ancient Thera site. A knowledgeable guide could be advantageous. And least you forget, don`t miss a visit the Terrace of the Festivals. This is the site where the men danced naked to pay tribute to Apollo. For those with high energy levels, you would do well to walk all the way and partake in the breathtaking scenery of Santorini. There is also a spring inside a cave that you will encounter. First time visitors hit the walking trail on the Main Street that meanders through Ancient Thera and will come across picturesque places like Kamari, Fira and on towards the azure blue Aegean sea at a distance.

Skaros is a rocky headland that protrudes out to the azure blue Aegean Sea. In the earlier days, a majestic castle was located here and used to be the principal place of Christian congregation in Santorini till the beginning of the 1800s. Unfortunately, the castle was completely ruined during an earthquake in the 19th century and all that remains today are remnants of the castle. Legend has it that the medieval castle of Skaros, was never conquered during its long 600 years of existence. There is a well-defined trail that originates from the renowned Agios Georgios church that connects Skaros with the village of Imerovigli. The views are breathtaking. Skaros used to be the capital of Santorini till the 18th century. Later on, Fira became the capital due to its close proximity and easy accessibility to the sea. In spite of this, Skaros still retains its old world charms and has plenty to offer in terms of scenic beauty of the surrounding areas including of the caldera. The neighborhood around Skaros is full of restaurant, bars and hotels. Its stunning landscape and scenic beauty attract many couples from all over the world for a wedding ceremony or a honeymoon.

Argyros Mansion (Archontiko Argyrou) is a wonderful traditional mansion in the village of Messaria, in the center of Santorini island. Argyros Mansion is renowned for its elegant Neoclassical architecture. This mansion was built in the year 1860 and visitors can get a view of life in Santorini through the past two centuries. The mansion is characterized for its high quality ethnic architecture, the arched ceilings and exquisite floors. There is a sense of romance in the air inside. The museum is located on the first floor and has a good collection of artifacts and antiquities that offers fascinating insight on the fabled Greek tradition, culture and heritage. You will come across unusual paintings, antique furniture and many items dating back to the 19th century. The neighborhood surrounding the mansion is dotted with small shops. Sadly a part of the edifice was badly damaged in the earthquake of 1956, after which the building remained uninhabited for 35 years. In 1985, the building was declared "valuable sample of traditional architecture" by the Greek Ministry of Culture and then its renovation started. Today, it works as a museum hosting permanent and temporary exhibitions.
Opening hours: From May 1st to October 31st, Daily (except Mondays and Thursdays), 10 am - 2 pm and 5 - 7 pm

The Akrotiri Lighthouse is among the oldest lighthouses in Greece and was constructed way back in 1892. It stands like a sentinel on the southern peninsula of Santorini. The lighthouse of Akrotiri is conspicuous by its square shaped tower that looms 33 feet above the lighthouse warden`s house. Initially, the lighthouse was operated by petrol fuel. But with the introduction of electricity in the year 1988, it has been operated electronically and reportedly emits a radiant white light at intervals of 20 seconds. The area surrounding the lighthouse is replete with vestiges of the Minoan period which is regarded by many scholars as the high water mark of the Aegean culture and civilization. The best time to visit the Akrotiri Lighthouse is during sunset. The view of the red molten ball dipping into the azure blue Aegean Sea makes for a kaleidoscopic vignette. The surrounding area of the Lighthouse is replete with fish taverns and first time visitors would do well to spend some time savoring the sea food delicacies on offer.