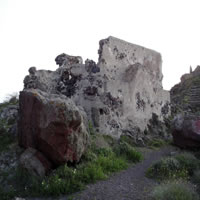 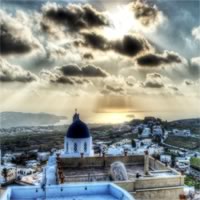 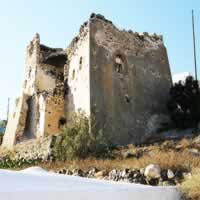 The five fortified settlements known as the Castles & `Goulades` in Santorini Island are some of the must visits. Dating back from the Venetian Rule of 1207 - 1580: Skaros Fortress in Imerovigli, the Castle of Agios Nikolaos (Oia), the Tower of Nimborio (Emporio), Pyrgos Castle `Kasteli`and Akrotiri Castle & Tower.

Skaros was one of the five fortified settlements and the most important one. The fortress constructed there offered protection from pirates. The original castle, Epano Kastro (Upper castle) or `La Roka` was built in the later Byzantine years by the Italian Architect Giacomo Barozzi. The first Duke of Naxos, Marco Sanudo gave Santorini to Giacomo Barozzi in the year of 1207. Skaros rock of today is totally uninhabited with the exception of a small church, the Chapel of Agios Ioannis. Only a few ruins are left from the formerly numerous dwellings.

Tower of Nimborio: The `Goulas`

The fortified Tower in today`s Emporio is a square structure. It was built under the Venetian style, probably in the 15th century. Tradition says that it was built by the monks of the Abbey in Patmos. The tower, as a glebe of Patmos, was first used by the monks some time after its erection. Sources say that it was originally owned by the Dargenta family. There used to be a small chapel within the walls of the martyr Christodoulos, founder of the Abbey of Patmos, as well as a tunnel which led to the `Kasteli` (castle).

Castle of Pyrgos, known as `Kasteli`

Kasteli castle is a splendid Venetian Castle, ideally located in the picturesque village of Pyrgos. It lies close to the capital city of Fira and sits at the highest spot of the island. The houses are arranged amphitheatrically surrounding the remains of the castle offering a magnificent view to the sea. Today on the hill top, right at the center of the village one can see ruins of Kasteli fortress which is conspicuous due to its marvelous architectural grandeur. Right next to the fortress is the beautiful church of Agia Theodosia. The castle could be only entered at one point, the `Porta`, above which obtruded a square structure with an opening at the bottom part from which the inhabitants of the castle could pour burning oil on invaders. Below the castle there used to be a system of passageways, used for protection or even escape in times of need.

In the Middle Ages, Oia was one of the `Kastelia` of the island. It was called `Kasteli` of Agios Nikolaos. The castle`s existence was already documented in 1480. Oia suffered harshly in the earthquake of 1956 and much of the traditional settlement tumbled into the sea below. Nowadays the site of the Kasteli in Oia is a favorite spot for sunset watching.

Castle of Akrotiri: The `Goulas` (Tower)

Akrotiri was one of the `kastelia` on the island. It was named `La Ponta`. In the middle of the settlement stood the `Goulas` of Akrotiri, which severely damaged during the 1956 earthquake, although prior to that it was in very good condition. Eventually the castle fell to the Turks at the turn of 1617.