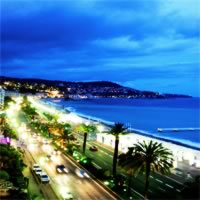 The renowned Promenade des Anglais, which runs parallel to the coast, has four plus miles of walkway along the Baie des Anges and boasts numerous top-notch hotels and restaurants that offer spectacular views of the pebbly beaches and calm, cobalt waves of the Mediterranean Sea. The bay itself is one long strip of bleached pebble and turquoise water, divided between the volleyball courts and crisp white sun loungers of the private beaches, and the colorful melee of the public ones. And as evening falls, the promenade comes alive with sunset strollers and post-work joggers; while parents sitting on the famous blue seats watch their children devour waffles and Nutella crêpes. Until finally, when the last stragglers have packed up their towels and wandered home, the bars and restaurants get going, and the sea becomes a dark, glittering backdrop to the evening's festivities.

The Baie des Anges is divided into two parts. Much of its steep, pebbly shoreline is open to the public at all times of day, throughout the year. And it is on these public beaches that you can expect to encounter serious crowds in summer. If you'd rather occupy a more exclusive patch of sunlight, you'll need to pay the entrance fee on one of the private beaches. 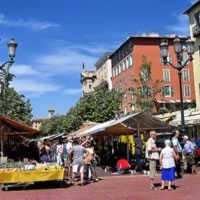 Vieux Nice is a traditional Medieval village characterized by narrow, winding streets and buildings that date back to the 16th century. As its name implies, Vieux Nice (Old Nice) is the city's historic district. Sitting away from the sea just east of Masséna along Quai des Etats-Unis, Vieux Nice is a maze of narrow streets and baroque architecture, and a history buff's dream. This district houses numerous churches as well as Castle Hill (Colline du Chateau), the site of Nice's first settlement, and the baroque-style Palais Lascaris. The renowned Cours Saleya market located just north of the Promenade des Anglais is worth a visit. Vieux Nice is also known for having some of the best ice cream parlors in the city, most of them clustered around Place Rossetti, just north of the Cours Saleya flower market. The Palais de Justice is the major landmark, linking the Cours Saleya, a street filled end-to-end with restaurants and bars that is famous for its daily markets, with the more typical narrow streets behind rue de la Prefecture. Nice's Opera house, an architectural masterpiece, is in the heart of the Old Town and has regular performances throughout the year. In the evening, the Old Town comes alive with an abundance of fine restaurants and late night bars, from French Brasseries to Irish bars, from Indian restaurants to Provencal gastronomy.

The Chateau on the hill is the former site of a once great castle that had panoramic views of the Mediterranean Sea. Demolished in 1706, the site and adjacent grounds now contain a large park, playground, a waterfall and many areas from which one can enjoy spectacular views of Central Nice, the Port, the Promenade des Anglais and the long beach that winds itself around the Baie des Anges. If the 213 steps to the top seem daunting, one can take the public elevator for a token fee. 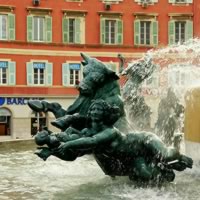 Place Masséna sits east of the seafront at the point where Promenade des Anglais becomes Quai des Etats-Unis. The square and its surrounding streets are home to the city's more upscale shops and boutiques, including the Galeries Lafayette and the Centre Commercial Nice Etoile. If you tire of the hustle and bustle of the shopping streets, escape to one of Masséna's two parks. The Jardin Albert I, which sits off of the Promenade des Anglais, features examples of contemporary sculpture while the Masséna Gardens (La Place Masséna), east of the square, offer a serene setting for lazy strolls. 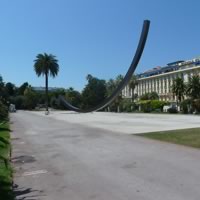 Unlike Vieux Nice, where the buildings are jammed tightly together, Centre Ville has some splendid boulevards (notably Victor Hugo), where the townhouses are grand and the restaurants correspondingly smart. The area is a vibrant, cosmopolitan sector characterized by chic cafes, bars and designer shops. Rue Massena, which runs from Place Massena to rue de France, is completely pedestrian and is lined with bustling cafes, international restaurants and chic designer shops. Other popular streets include rue de la Liberté, rue Meyerbeer and rue de la Buffa. Boulevard Victor Hugo is a grand French Boulevard lined with large trees and adjacent to two tranquil parks, Jardin Alsace Lorraine and Jardin Moreno Jean. The area's busiest shopping streets (France and Buffa) are just a few steps to the south, with a rainbow of shops, bars, clubs and cafés. But for more exclusive addresses, head down to the blue-chip rue Paradis, which is, as its name implies, a kind of heaven on earth for design junkies.

Also located in this area are The MAMAC (Musée d`Art Moderne et d`Art Contemporain) and the Théâtre de la Photographie et de l`Image. And for those with children, the fascinating Muséum d`Histoire Naturelle is stuffed to the rafters with creepy crawlies.