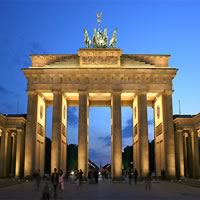 Occupying areas of both former East and West Germany, Mitte is generally considered Berlin's city center due to its geographic location; it is also where Berlin's most recognizable city monuments and memorials are found. Serving as the historical center as well, Mitte has an old city charm with a modern feel, as seen through the many coffee shops, restaurants, and art galleries lining the streets. It's a place where old cobblestoned streets and modern high rise buildings exist in harmony. The district's most famous boulevard is Unter den Linden, on and off the boulevard are baroque and classical monuments to Prussian culture. Famous squares within the district include Pariser Platz (the monumental square adjacent to the Brandenburg Gate), Potsdamer Platz, and Alexanderplatz. Other noteworthy sites include Museum Island, Humboldt University, the Crown Prince's Palace, the Opera House and Brandenburg Gate. Shopping boutiques also contribute to heavy foot traffic in Mitte. The architecturally humbler, but more neighborhood-like Scheunenviertel area allows the casually chic to saunter from courtyard gallery to sidewalk café. Only traces are left of the Jewish community that lived here from the late 17th century.

Between Mitte and Charlottenburg, the huge Tiergarten park (which means 'Animal Garden') refers to both a massive urban park, and to the park's north, a residential district. The park was originally intended as a backdrop to the grand avenues laid out by the German Kaisers. The neighborhood contains the Brandenburg Gate, the German Reichstag (Parliament), the Berlin Zoo, and some of the city's grandest museums. 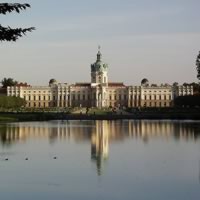 Located in former West Berlin, Charlottenburg primarily attracts families and more upscale types. Bombed in the war and built anew in the 1950's, the ruined Kaiser-Wilhelm-Gedächtniskirche church is the nexus of activity. Follow what becomes an increasingly silken ribbon down Kurfürstendamm (Ku'damm) and the setting becomes more genteel. Here one will find the oldest chocolate producer, the Georg Kolbe Museum, Astor Film Lounge cinema, Villa Harteneck, and a slew of upscale lounges and boutiques. Kurfürstendamm Boulevard continues to be a popular shopping destination for high end designer wear. One of the most interesting subdivisions of Charlottenburg is the neighborhood around Savignyplatz, a tree lined square a short walk north of the western zone's most visible boulevard, Kurfürstendamm. Lining its edges and the streets nearby are a profusion of bars, shops, and restaurants, an engaging aura of permissiveness, and an awareness that this is the bastion of the city's prosperous bourgeoisie. Charlottenburg Palace and the Ahmadiyya Mosque are two impressive architectural spaces worth visiting. 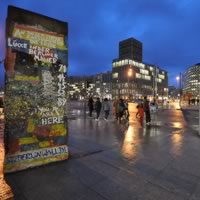 Situated between Prenzlauer Berg in the north and Kreuzberg in the south, Friedrichshain is filled with personality. It is a lively old workers district that has completely been taken over by rad nightlife venues, graffiti and leftist students. Tree lined Simon-Dach-Straße is full of cafés and bars, while Boxhagener Platz hosts a popular flea market. Architecturally, Friedrichshain showcases a mix of styles ranging from high rise buildings to 19th century town houses. The East Side Gallery, the former Berlin Wall, now serving as a memorial of 150 wall paintings from a slew of international artists, is located here. Just behind the gallery is one of Berlin's most popular hangouts, the Ostrand Beach bar. Partly due to its alternative bars, restaurants, nightclubs and coffee shops, many students gravitate toward this neighborhood.