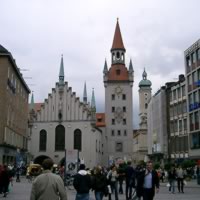 This is the historic part of Munich, the site of the original medieval city, with a web of cobbled lanes, medieval squares and soaring church spires. You can walk through this relatively small district in about 15 minutes. Marienplatz, Munich's main town square is surrounded by splendid neogothic buildings and the city's main tourist attractions.

Included in the Altstadt district is the Fussgänger (pedestrian) Zone, home to many of Munich's elegant shops. North of Marienplatz is where you will find the area some call 'Royal Munich.' On Royal Munich's southern end stands the Munich Residence, former home of the Wittelsbach family that ruled Bavaria until the early 20th century. A bit north of the Residenz is the Hofgarten or Court Garden, which was the main garden for the Munich Residence. Blocks away is the Nationaltheater, once the royal opera house, and now the stomping grounds for the Bavarian State Opera Company. Even farther north of Royal Munich is the country's largest city park, the Englischer Garten (English Garden), where you can enjoy boating, walking or biking along the trails. Car lovers will enjoy the Deutsches Museum to the south of Marienplatz along the Isar River. Follow hungry locals south to the bustling Viktualienmarkt food market.

The equivalent of New York's Fifth Avenue, Maximilianstrasse is Munich's Golden Mile. Here you find the city's most elegant and expensive boutiques, restaurants, and hotels. Visitors can browse through stores like Armani, Hermès, and Bulgari. Along with numerous chic hotels and restaurants, the street is also home to the Museum of Ethnology and the overpowering monument to the king, the Maxmonument. The street is the primary connector from the Altstadt to the suburbs of Lehel and Haidhausen.

Swing north of the Altstadt to Munich's cultured Maxvorstadt, a 19th century district starting at the monumental Odeonsplatz square. The star attraction is the Kunstareal museum quarter. The twin Pinakothek galleries showcase artworks from Rembrandt to Magritte. The area today draws its character from the facilities of the University of Munich, and it teems with student bars, bookshops, and galleries. 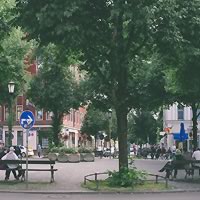 Crossing the Isar River brings you to workin-class turned cutting-edge Haidhausen, sometimes called the 'French Quarter.' This district is home to Gasteig, the city's primary cultural, educational, and conference center. The modern complex houses the city library and the Munich Philharmonic Orchestra. Its many theaters and lecture halls play host to a variety of events, principally musical and theatrical performances. The district is also a trendy nightlife center, crammed with restaurants, bars and sights. The French Quarter around Pariser Platz, the interactive German Museum and the graceful Art Nouveau Müller`sches Volksbad pool are a short amble from transport hub Rosenheimer Platz.

Located just northeast of the city center and near Arabellapark, Bogenhausen is the wealthiest part of the city, where affluent Münchners live in Art Nouveau villas, located within walking distance to the English Garden. Now, it is also home to art galleries, boutiques and restaurants. It's worth wandering through Bogenhausen's main street, Prinzregentenstrasse, for the interesting architecture.

Ludwigsvorstadt is located directly adjacent to the historic city center to the south. The neighborhood consists of Munich's Central Station and the adjacent area to the south of the station, where a lot of hotels, hostels, international diners, casinos, and sexshops are located. Immigrants from over 150 countries make this district one of the most buzzing and international areas of Munich. Bordering is Isarvorstadt, a very vibrant residential area with lots of bars, pubs, and clubs, around the beautiful Gärtnerplatz square. On warm summer evenings this square is a very popular location among young folks to gather, drink a few local beers, and generally enjoy life.

Within walking distance to Altstadt is the northern neighborhood of Schwabing, an area whose bohemian feel is comparable to that of Greenwich Village in New York. Home to many young professionals, Schwabing's main road, Leopoldstrasse, is lined with cafés, bars, restaurants and beautiful Art Nouveau architecture. Schwabing is also where you will find a good chunk of Munich's museums, including the fantastic Old Pinakothek art museum and the nearby New Pinakothek, filled with 18th and 19th century works.

Many famous literary figures have called Schwabing home, including Thomas Mann. It has the city's finest examples of Art Nouveau architecture. Leopoldstrasse makes almost a straight axis through its center. The Englischer Garten forms its eastern border, the Studentenstadt is to its north, and Olympiapark and Josephsplatz mark its western border. 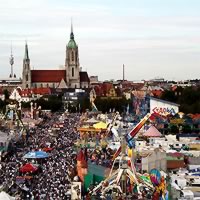 Theresienwiese, south of Nymphenburg and west of Altstadt, is renowned for being the site of Munich's annual Oktoberfest. The 16 day event draws more than six million people from across the globe each year to gorge on hearty Bavarian foods washed down with steins of beer. In addition to the Oktoberfest, a spring festival and a winter festival (Winter Tollwood) take place there as well. Every year in April, one of Germany's largest flea markets is also held there.

If you visit Munich when it is not Oktoberfest, visit the grounds to see the statue of the Maiden Bavaria, who watches over the city in legend. You can climb the 130 steps inside the statue and peer through the eyes of Bavaria, as you take in a bird's eye view of the city. It is bordered in the west by the Ruhmeshalle and the Bavaria statue, and in the east by Esperantoplatz, a square named for the international language Esperanto. There, a memorial commemorates the victims of the 1980 Oktoberfest bombing.