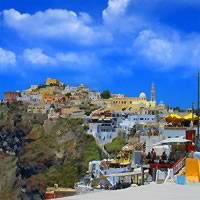 The capital of Santorini, and the most important of all villages, Fira is located at the west side of the island on the caldera side, it offers one of the best views of the island. I The town is 6.5 miles away from the main port, Athinios and about 800 broad, zigzagged steps up from the port. Fira is a typical Cycladic village made of many white painted houses in stepped streets with blue domed churches and sun bathed verandas. Many of its beautiful buildings were constructed back in the times of the Venetian invasion and offer an incredible view of the volcano and the sunset. During summer the central streets are overcrowded with tourists and filled with all kind of shops, restaurants, cafes, bars and night clubs. Of interest are the Archaeological Museum, exhibiting many items from several excavations conducted in the ancient Minoan settlement of Akrotiri, the Megaron Gyzi Museum with its fascinating collection of photos of Fira before and after the earthquake of 1956, and numerous churches and monasteries.

Plateia Theotokopoulou is the main square of Fira where all the locals meet. The small streets surrounding it are filled with all kind of shops, cafe, restaurants, bars and night clubs. Erythrou Stavrou, one block west of 25 Martiou, is the main commercial thoroughfare. Another block west, Ypapantis runs along the crest of the caldera and provides some stunning panoramic views. 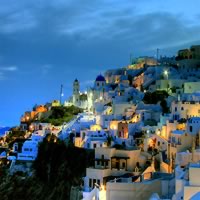 Immerovigli is a picturesque and quiet village situated only 2 miles northwest from Fira. It is a continuation of Fira and one of the most beautiful balconies of the island. As the highest spot along the caldera rim, it offers awe inspiring views. Though much of the village was destroyed in the 1956 earthquake, Imerovigli is still classed a `Traditional Settlement`, protecting it against over development. The buildings that did survive have been tastefully restored, notably the traditional `cave` homes that were deeply carved into the hillside. There are also many taverns and cafes with stunning views to the caldera. In front of Immerovigli lies an enormous rock called Scaros. On top of it is a castle that was built during the 13th century and abandoned in the early 1800s. There are numerous chapels and churches built on the rocks overlooking the blue sea. The local Church of the Panagia Malteza has an impressive iconostasis and some icons depicting scenes from the Old Testament. A small white chapel occupies the site of the Rocca at Skaros, which resisted dozens of sieges before falling to the 1956 earthquake. A cliffside footpath runs from Imerovigli back to Fira and offers some of the most spectacular views over the caldera. The village is known as the ultimate romantic destination. 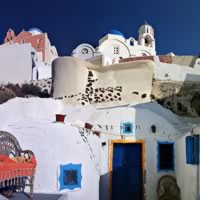 Firostefani (crown of Fira) lies 1.25 miles to the north of Fira, and without a doubt, the views from this part of Santorini are spectacular, offering another perspective of Santorini volcano. One can enjoy the magnificent sight of Fira itself and the breathtaking sunset in the evening. There is no village center in Firastefani as such. It is now almost entirely composed of holiday hotels, pools, villas and apartments with a few restaurants and cafes perched precariously along the top of the cliff. Between the village of Firostefani and Imerovigli lies the Agios Nikolas Monastery. 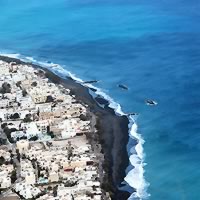 Situated on the southeast side of Santorini, 6 miles from Fira, Kamari is famous for its beautiful black sandy beach, which extends all the way to Monolithos, and for its green landscape. Kamari was the most important strategic point on the island after the decline of Acrotiri in ancient times. It was completely rebuilt after the 1956 earthquake.The black sandy beach, over a mile long, is the main attraction.Taverns and cafes can be found along the coast and you can have unforgettable nights of entertainment in the bars. Not far from the village is the archaeological site of Ancient Thira. Also interesting in Kamari is the church of Panaghia Episkopi, built in 1100.

Kamari is the busiest beach on Santorini and offers regimented lines of sunbeds and plenty of beach facilities. The black gritty sand and stone can get very hot at the height of summer, there is a sharp drop into the water and strong currents further off shore, so it`s not ideal for families with children. Kamari Village is connected with frequent bus service from Fira town. 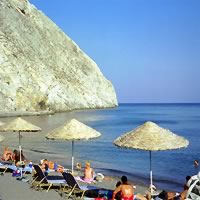 Perissa is one of the most popular beaches in Santorini. The 4.5 mile long black sandy beach is set under the pretty mountain of Mesa Vouno. It offers crystal water and smooth sand plus it is the best protected beach from the summer Aegean winds. Perissa lies right next to ProfitisIlias Mountain, totally protected from the North. The large headland to the north also keeps Perissa well sheltered from any wind. Perissa beach shelves steeply into the sea and slippery slabs along the shore make it less than ideal for children. However it has all the usual tourist facilities and a wide selection of water sports. There is a large campsite here, an excellent bakery and several mini-markets. Eucalyptus groves provide some shade in the resort center. A number of hotels, restaurants, taverns, bars, discos and other facilities are available for the visitor. Perissa is also a popular day trip for those based in beachless Fira. 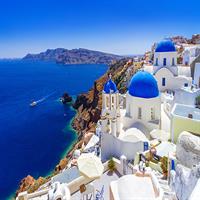 A small coastal town on the northwestern tip of Santorini, Oia stretches over a mile along the northern edge of the famous Caldera that forms the island. A beautifully photogenic town, Oia is an appealing maze of cafes, restaurants, small shops, and white-washed accommodation facilities. The town is busy through the day up until sunset, as there is not much going on for nightlife. There is lots of high-end shopping and many restaurants, but only one bar. The southern part of Oia looks into the caldera. The northern part does not have views on the caldera but does have perfect sunset views. Oia is a taxi or bus ride away from the hub of the island.