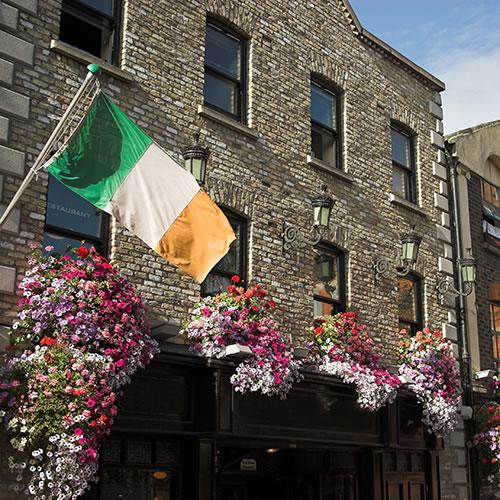 Wedged between Trinity College and the Old City, just south of the River Liffey, Temple Bar`s 18th century cobblestoned street is Dublin`s party hub, packed with bars, discos, and pubs. Temple Bar lies east along the river and has retained the medieval design of its streets, with the majority of the area open only to foot traffic. Temple Bar is home to several popular pubs and restaurants and many museums and art galleries, including the Gallery of Photography, the Irish Film Centre and the Temple Bar Gallery and Studios. Meeting House Square hosts the weekend food market. At night, this is largely the stamping ground of young tourists looking for lots of alcohol. South and west of Temple Bar, there is the Old City, dating from Viking and medieval times, the cobblestone enclave of the historic Old City includes Dublin Castle, the remnants of the city`s original walls, and Christ Church and St. Patrick`s cathedrals. Recently, Old City has also gained cachet for its hip boutiques where local designers sell their clothes. 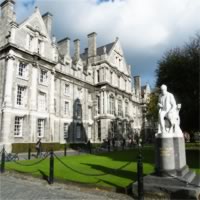 On the south side of the River Liffey, Trinity College is an Ivy League-style university with shady quadrangles and atmospheric stone buildings. Here you`ll find the famous Book of Kells, an illuminated manuscript written in Latin by Irish monks in 800 AD, which is decorated in ornate writing and drawings. Trinity College is virtually the dead center of the city, and is surrounded by bookstores, shops, and noisy traffic. Nearby is the white colonnaded Bank of Ireland as well as Fitzwilliam and Merrion Squares, two little square parks surrounded by grand Georgian town houses.

On the grounds of Trinity College, on the campus`s southern end, sits a large cricket pitch called College Park. Traditionally home to the Dublin University Cricket Team, it is also the home pitch for the Leinster Lightning, one of the three provincial cricket teams in Ireland. Nearby is the Pavilion Bar, Trinity College`s sports bar. College Park is accessible by Dublin Bus from Nassau Street, the street just below the pitch. 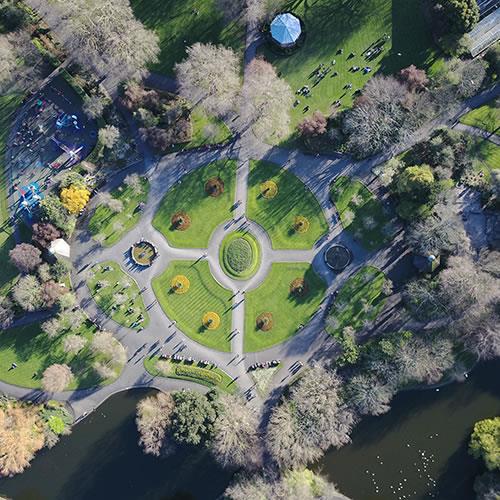 South of Trinity College, linked by Grafton Street, is St. Stephen`s Green, with its 22 acres of landscaped lawns loved by locals on sunny days. The neighborhood is filled with impressive Georgian architecture and is home to Dublin`s finest hotels, restaurants, and shops. West is Merrion Square, where Dublin`s iconic doorways lend character to the elegant Georgian houses. Close by is the majestic Leinster House parliament building. West is Grand Canal for leafy waterfront walks to Portobello`s neat Victorian red-brick terraces. 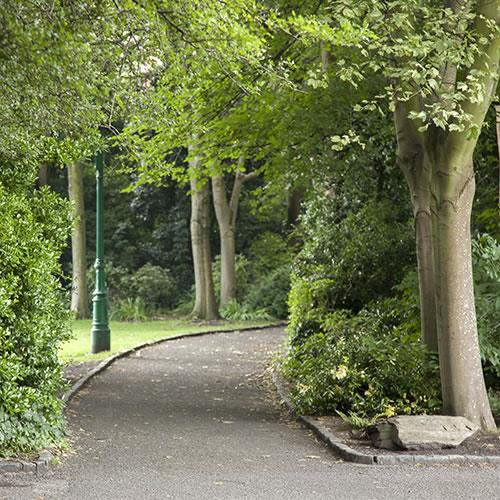 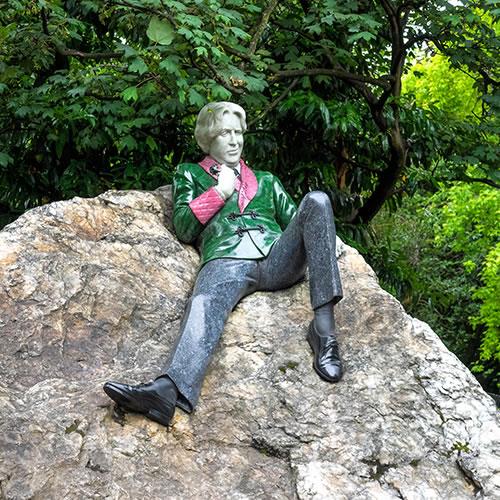 Merrion Square is located about 1,000 feet south of Pearse train station and just east of the Archaeology Museum, the National Gallery, and the office of the Taoiseach (an Irish political term, literally meaning `chief`, equivalent to `prime minister`). The Georgian-terraced Merrion Square is accessible to the west from Clare Street and to the east from Lower Mount Street. The square was designed in the four decades or so after 1762, when the Duke of Leinster decided to build his Georgian terraced house south of the River Liffey. At that time, no other Georgian square had been designed south of the river. St. Stephen`s Green and Fitzwilliam Square were designed in similar manners after the completion of Merrion Square.

The central garden inside the square is a public park, and until the 1950s, the Georgian terraced houses in the square were all occupied by locals. Oscar Wilde, William Butler Yeats, and Daniel O`Connell all lived at Merrion Square. Today there is a statue of Oscar Wilde in the main park, sitting on a rock. On or around the square you will find the Irish Red Cross, the Irish Georgian Society, and to the north on the terrace, the National Maternity Hospital. 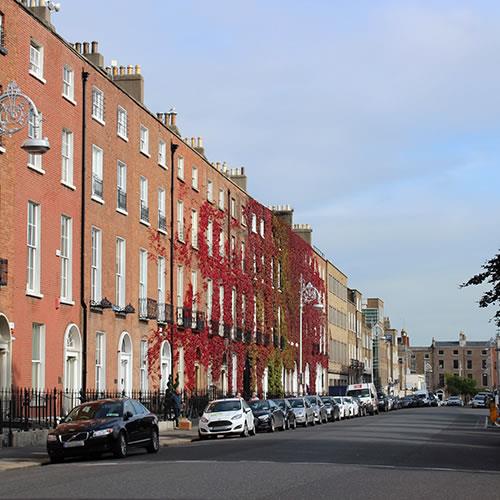 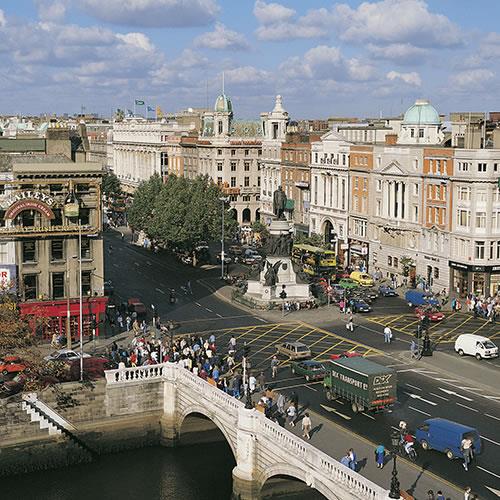 North of the River Liffey, O`Connell Street, filled with shops, is graced with statues of Dublin luminaries. Halfway along is the landmark General Post Office building, the center of the Easter Rising in 1916. Museums line the northern end. A westbound walk on the riverside Liffey Boardwalk passes the Italian Quarter`s alfresco cafés at Ormond Quay, and the 18th century Four Courts. Once unfashionable, the Northside now buzzes with bars and an eclectic mix of multicultural restaurants, especially around Parnell Street. With four theaters in walking distance of O`Connell Street, this is Dublin`s theater district.

North Quays (the Liffey Riverbanks on the Northside)

Once the center of Dublin`s shipping industry, this is now a trendy address for hotels, bars, and clubs. The quays are actually a series of streets named after the wharves that once stood at water`s edge. The quays start near the mouth of the Liffey and end in the green peace of Phoenix Park. 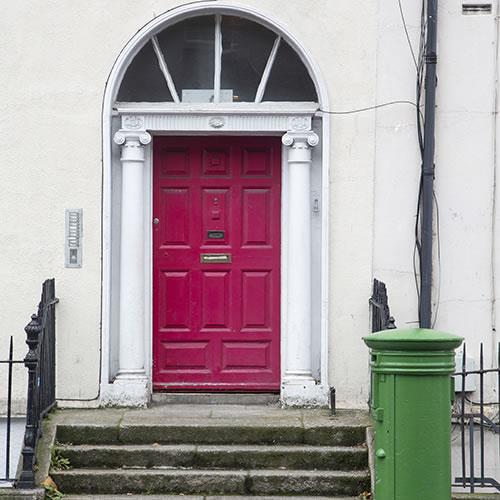 West and southwest of St. Stephen`s Green and Iveagh Gardens, you will find the neighborhood of Portobello, which in Victorian times was considered a suburb of the main city. Formerly farmland, Portobello was designed as a residential area: the Victorian houses were for the burgeoning middle classes, and the terraced houses near the Grand Canal were for the working class. Beginning in the early twentieth century, Portobello experienced an influx of Jewish residents, and today the area is still referred to as `Little Jerusalem`. The Irish Jewish Museum is located at the corner of Walworth Road and Kingsland Parade, not far from the Canal. 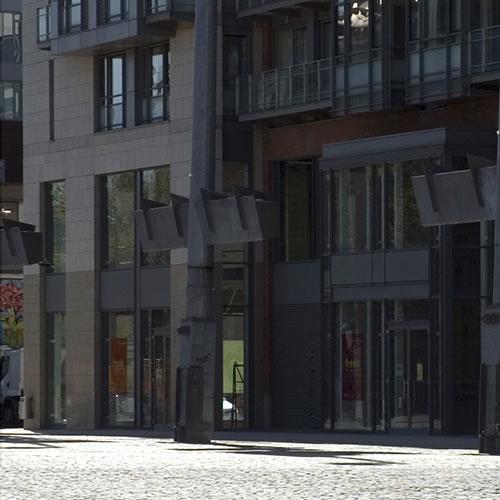 Smithfield as a neighborhood is fairly large. It only runs about 1,000 feet north of the Liffey, but it spans for over a mile from the National Museum of Ireland - Decorative Arts and History in the west to the Ha`penny Bridge in the east. The largely commercial and industrial neighborhood grew around Smithfield Square, which was known for its open market that hosted special horse auctions twice a year. For those visiting the area, you will find the Old Jameson Distillery here, as well as the National Leprechaun Museum. In the eastern portion, there are two large shopping centers: Jervis, on the corner of Jervis and Abbey Streets; and Ilac, accessible either from Parnell Street or Henry Street. 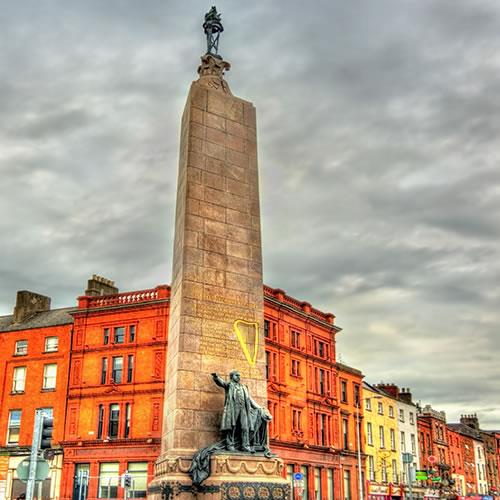 The Parnell neighborhood of Dublin revolves around one of the most noteworthy public squares in Dublin, Parnell Square. The neighborhood is roughly bounded by Parnell Street to the south and Dorset Street to the north and west. It is a very historic area: many key events related to the 1916 Easter Rising occurred here, including the assembly of the 3rd Batallion by future President Eamon de Valera the night before the insurgency took place. A number of important points of interest are located on the Square, such as the Garden of Remembrance, dedicated `to all those who gave their lives for the cause of Irish freedom`; the Rotunda Hospital; the Gate Theatre; and the Ambassador Theatre. The Dublin Writers Museum and the Hugh Lane Gallery are located on the northern edge of the Square. The James Joyce Centre is located two streets from the Parnell Luas stop, on Great George`s Street. 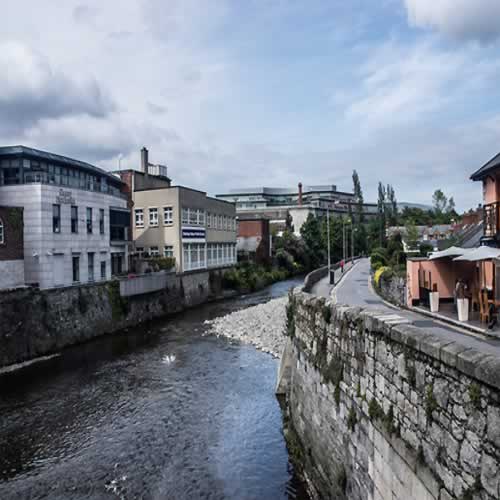 Immediately south of the Grand Canal, this upscale suburb is just barely within walking distance of the city center. Primarily a prestigious residential area, it is also home to hotels, restaurants, and embassies, including the U.S. Embassy. Originally developed in Victorian times, the streets are wide and tree lined and houses are substantial and set back in vast private grounds. Of all Dublin areas, Ballsbridge has the least built-up and most private feel. Yet, despite the space and relative tranquility, Ballsbridge is only minutes away from the city center. 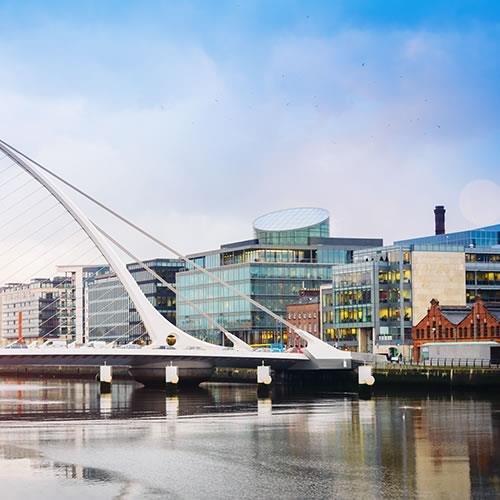 City Quay in actuality is just one of a number of quays located on the southern side of the River Liffey. In the neighborhood commonly referred to as `City Quay`, east of Westmoreland Street, there`s Burgh Quay, George`s Quay, then City Quay, Sir John Rogerson`s Quay, and finally Britain Quay. The quays were first developed in the thirteenth century and were considered the epicenter of the Irish shipping industry well into the time of Queen Victoria. Points of interest include the National Wax Museum, Tara Street train station, the Irish Seaman`s National Memorial, and the Bord Gais Energy Theatre. The O`Connell Bridge links the northern bank of the Liffey with Burgh Quay. The closest bridge to City Quay and Bord Gais Energy Theatre is called the Samuel Beckett Bridge (pictured). 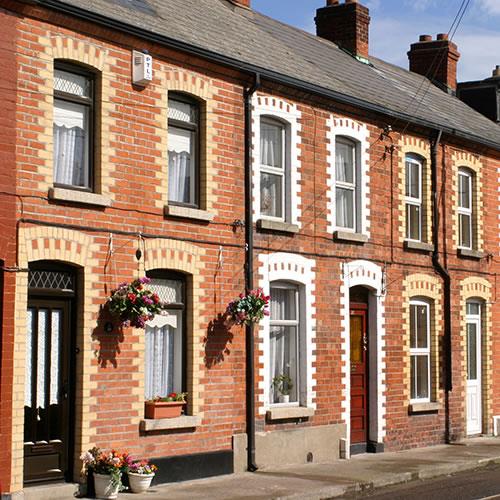 Southeast of the city center, Stella Gardens (also referred to as Ringsend) was once the place where large cargo ships docked. When the modern Port of Dublin was built on the other side of the Liffey, at Tolka Quay, the area went into a decline. Today you will find that the Grand Canal Dock project has revitalized the area, and many international technology brands such as Google, Facebook, Twitter, Airbnb, and others have made their Irish home bases here. As a result, the area is now called the `Silicon Docks`. The semi-detached houses here were once working-class and now are welcoming a more affluent resident. 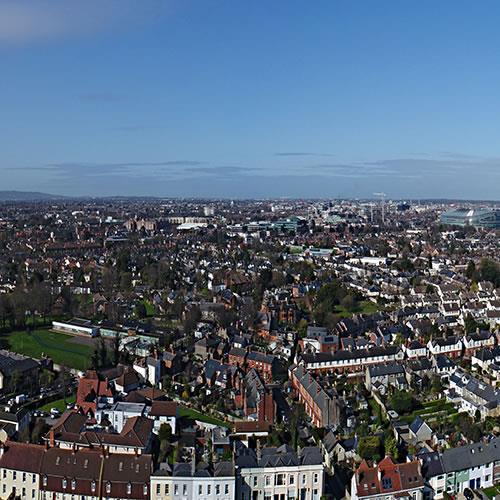 South and east of Aviva Stadium, you will find the neighborhood known as Sandymount. One of the more suburban and laid-back options you will find for accommodation, most of the action revolves around Sandymount Green, where you will find many restaurants, cafes and bars. A long, thin strip of beach, called Sandymount Beach, is located along Strand Road. Sydney Parade, which leads from the beach, will take visitors to Donnybrook, where the national television studios for RTÉ (the state broadcaster) are located. 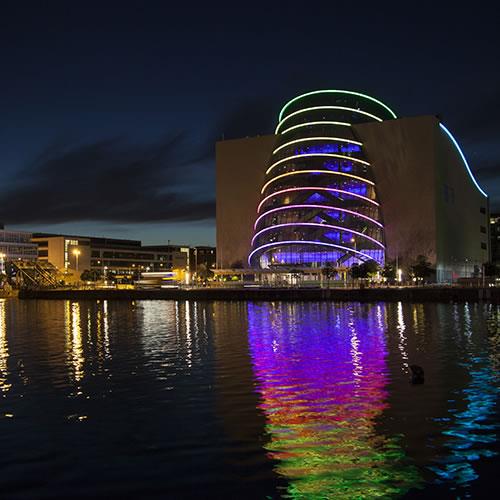 At the eastern end of the River Liffey`s north bank, bordering the renovated Docklands, the glittering IFSC is home to Ireland`s financial powerhouses. Between it and the neoclassical Custom House, the startling life-size famine sculpture marks the spot where migrants sailed away to escape poverty. To the north, George`s Dock`s refurbished warehouses are home to boutique-filled malls with waterfront wine bars at Customs House Quay. Further east, the 3Arena entertainment venue (which has replaced the old Point Theatre) draws thousands for major live events. Connolly train station and the Busaras Central Bus Station are located in the western portion of North Wall Quay, as is EPIC: The Irish Emigration Museum.