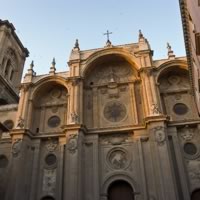 Granada's Old Quarter, often known locally as the Parte Vieja, has been the city's main religious and commercial center since the 14th century. Much of the Old Quarter is dominated by the 16th century Catedral de Santa Maria de la Encarnación, which stands off the Gran Via de Colón and is surrounded by an array of historical buildings, with views of the nearby Albayzin hills and the striking Moorish fortress of Alhambra. One block south is the pretty Bib-Rambla Square, full of florist's stalls and restaurants. This area still offers great shopping for arts, crafts and souvenirs in the narrow little alleys of the Alcaicería. 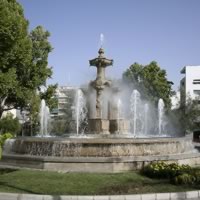 Known for its friendly locals and relaxed atmosphere, Granada's Realejo district is a particularly lively part of the city. This district was the city's Jewish quarter for centuries, called Garnata al-Yahud (Granada of the Jews) by the Moors when they arrived in Granada in the 8th century. During the years of Moorish rule, Jews lived relatively peacefully, but following the Christian conquest by the Catholic Monarchs, the Jews were expelled, the Jewish quarter was destroyed and the barrio was renamed El Realejo. One of the most important squares is the Campo de Príncipe located on the site of the former Muslim cemetery. Built in 1497, its focal point is the jasper and alabaster statue of Cristo de los Favores. Containing part of the university complex, many students reside in this part of Granada and consequently a large number of bars, cafés and restaurants have appeared, including a selection of Tapas bars. With a good variety of local shops, public squares and gardens, and a thriving café-street culture, the Realejo district of Granada also features many historic stone houses, narrow alleyways and night time entertainment. 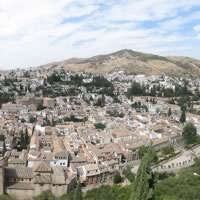 The historic Albayzin district was the Arab neighborhood, a large proportion of the Albayzin is situated on a hillside and contains a maze a cobblestone alleyways and narrow streets, lined with white-washed houses and often offering superb views of central Granada. The wealthy Arabs living here between the 12th and 15th centuries wanted privacy and sought to hide their prosperity in case they became the targets of envy and hostility. So they built high walls around their houses to keep out prying eyes. Look through the gates and grilles and you'll still see the geometrically designed gardens and patios with their fountains, irrigation systems, fruit trees, plants and flowers. On the northeastern side of the Albayzin district is the Plaza Larga, a scenic square featuring a host of nearby restaurants, Tapas bars and terrace areas, together with a bustling Saturday market, where a range of local produce is sold. The Plaza de San Nicolas, located at the Albaycin's highest point offers panoramic views of both Granada and the nearby Alhambra fortress. By day, look over the Alhambra complex and see the Sierra Nevada Mountains in the background; by night you see the Alhambra's palaces and fortress spectacularly illuminated by floodlights. 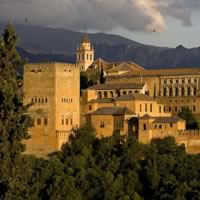 The Alhambra is the red fortress that sits on the hill overlooking Granada and covers an area of approximately 450,000 square feet. Once the residence of the Muslim rulers and their court, it is now one of Spain's major tourist attractions. There are three parts to the Alhambra: the ornate Nazrid Palaces, the Alcazaba (the battlements) and the Generalife (the gardens). The Alhambra starts at the end of the Cuesta Gomérez, which is the street that goes up from Plaza Nueva.