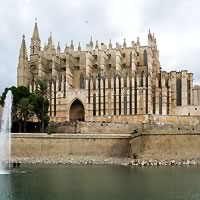 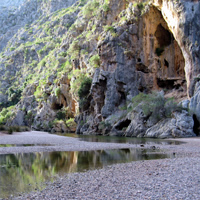 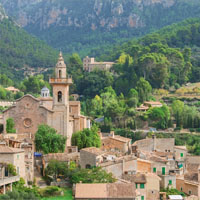 The magnificent Catalonian Gothic cathedral is the landmark of the city. Overlooking the harbor, it lies in the oldest part of the city and is dedicated to San Sebastian, Palma`s patron saint. The son of Jaume I of Aragon began construction in the early 1300`s in thanks for his survival during a great storm when sailing to Mallorca with his army. On New Year`s Day 1230 the foundation stone was laid on the site of where the main mosque originally stood, so it faces Mecca rather than Jerusalem. Along with the usual saintly relics (one is said to be a piece of the True Cross) it is also the home of the Royal Chapel which contains the tombs of Kings James II and James III of Mallorca.

The vast central vault is 144ft high
Its columns tower to a height of 65ft
It has one of the worlds largest stain glass windows containing 1,236 pieces of glass, and measuring almost 12m across.
Gaudi added the wrought-iron canopy over the main altar in 1909.

On the outskirts of the city 365 feet above sea level stands a round hilltop castle built in 1309 by King James II of Mallorca. Its round shape is unique amongst Spanish castles. Used as a temporary residence by King Juan I of Aragon fleeing with his court from the plague that was ravaging mainland Spain (1395), it has also been a refuge for the nobles and merchantmen who were escaping from the city (1521) during a revolt.

Bellver meant `lovely view` in ancient Catalan and the castle is worth a visit for the stunning views. One can see the whole of Palma de Mallorca, with the cathedral overlooking the harbor, and in the distance the 4 mile long beach of the Bay of Palma with the resorts C`an Pastilla, Playa de Palma and Arenal.

The Bellver Castle is open: The timetable is now Tuesday to Sunday with the following times

Originally built as an Arab fortress, the palace became the official Mallorcan residence of the Spanish Royal Family at the beginning of the 14th Century through King Jaume II. Although the royal court already had its official residence at Perpignan, Jaime II wanted to restore the citadel for his summer palace - so enter Pere Salvà who also built the Bellver Castle.

Standing opposite the Cathedral and overlooking the harbor, it is an imposing sight. Surrounded by a fabulous green space in the form of the S`Hort des Rei you can walk along shady paths or sit a while and listen to the gushing fountains. Unfortunately many of the rooms are empty however as part of his design plan The King also encompassed a Royal Chapel, known as the Chapel of Saint Anne. Although it is quite small it is exceptionally beautiful and so well worth a visit. Its Romanesque portal is one of the rare examples of this style of architecture on the island and a painting by the Mallorcan painter Rafael Mojer, from 1465, hangs inside.

During the annual summer holidays of the Spanish Royal Familiy on Mallorca the Almudaina palace is the official office of King Juan Carlos I, being used for ceremonies and state functions.

Situated in the narrow streets of the medieval quarter of the city is the only remaining Moorish-built building in Palma. Still intact, the Arab bathhouse one of the few buildings left from the occupation of the Moors. It is a haven of peace and quiet in the otherwise bustling city and definitely worth a visit. Walk through the lush walled garden and you enter an elegant horseshoe-arched and domed chamber, supported by 12 columns. You can see the cupola, or dome, has various round apertures to allow the steam to escape as this room was used for hot baths. You will see that there is a double floor through which the hot water and steam traveled. There was also a cold baths room which unfortunately no longer exists. It is thought that these Arab baths formed part of the palace of a noble Moslem.

The great poet, novelist and historian, author of I Claudius, spent much of his life at this house on the edge of the ridiculously picturesque village of Deià. Rooms contain lots of his furniture and belongings, and to all intents and purposes looks pretty much the way it did when he lived there. You can also stroll around the beautiful garden, with its almond, olive and carob trees. Afterwards, you might want to walk down to the tiny beach, as Graves himself used to do, for a swim and lunch by the sea.
Address: Carretera Deià-Sóller, Deià

Many of Mallorca`s wines are made in and around this village north-east of Palma, which has been awarded designation of origin status (the Spanish equivalent of appellation controllée). The main grapes used are the local varieties Manto Negro and Callet for red wines and Moll for whites. Most of the wineries are open to the public, although it is often advisable to call ahead.

While the most well-known winery is José L. Ferrer, others are also well worth visiting, such as Macià Batle, Vins Nadal and Son Prim, to name just a few.

If you are in the mood for mooching around a pretty little town full of pavement cafés and bijou shops, Artà, in the east of the island, is just the thing – particularly on Tuesdays when the market is on. Walk up to the battlements of the Santuari de Sant Salvador for views across the rooftops and the countryside and coastline beyond. Also interesting is Ses Païsses, just outside the town, a Talaiotic settlement believed to have been founded more than 3,000 years ago. There are good golf courses nearby, as well as caves and some lovely beaches.

Near Port d`Alcúdia on the northeast coast, these wetlands cover around 4,200 acres and are great for bird watching, cycling and walking. The more than 200 bird species that inhabit the reserve at different times of the year include kestrels, Eleonora`s falcons and purple herons. You cannot drive in the reserve, but there is a parking lot near the Anglesos bridge off the main road, which is half a mile from the Sa Roca visitor center, where you can get a map and hire bikes.
Address: Carretera Alcúdia-Artà, MA-12

Islamic, Italian and English influences are all discernible in these gardens in Bunyola north near Palma, which feature orange and lemon trees, tropical plants, pools and fountains. Although they have existed in this form since 1954, the gardens and the house to which they belong date back to the 13th century, when the estate was home to the Moorish governor of Inca. Stroll along paths lined with fragrant honeysuckle and jasmine, and end up at the little bar for a glass of homemade lemonade or orange juice.
Address: Carretera Palma-Sóller, km 17

Located on Mallorca`s east coast the caves are without doubt one of the island`s most outstanding tourist attractions, extending for almost 4,000 feet and including internal heights of 82 feet above the cave floor.

The Caves of Drach were known in the Middle Ages and explored in 1880 by M.F. Will and in 1896 by E.A. Martel, who discovered the cave with the lake that bears his name. The cave was remodeled for visitors between 1922 and 1935: a new entrance was made, paths were designed and ladders built. An electrical lighting plan designed by the engineer Carles Buigas was also installed.

Guided tours take around one hour and follow a .75 mile path. The tour includes a classical music concert and a boat trip across Lake Martel. The temperature inside is around 70ºF, with a relative humidity of 80%.

Note that 2.5 miles to the north, there is another beautiful set of caves, called the Cuevas dels Hams (the fishhook caves).

In a beautiful setting in the Serra de Tramuntana, Lluc is considered to be the spiritual center of Mallorca. A figure of the Madonna, La Moreneta, was found there in the 13th century, which led to it becoming a place of pilgrimage and to the foundation of a monastery, which is now a basic but pleasant hotel. The original figure, now adorned with a jeweled crown, is on display in the 17-century Basilica, where choirboys sing every morning and evening. You can walk around the botanical gardens and this is also the starting point for several walks in the surrounding hills.
Address: Plaça des Peregrins, Escorca

Capdepera Castle is located one mile west of Cala Ratjada in the town of Capdepera. Originally built as a fortress by the Romans in the fourth century CE, Capdepera Castle was completed to the extent it is seen today by King James of Mallorca in the early fourteenth century. The castle was a key defensive garrison in northeastern Mallorca, protecting the coast from possible attacks coming from the direction of Menorca. The castle was occupied until the middle of the nineteenth century. It was opened up to tourists in 2000 and is open year-round.

The Valldemossa Charterhouse on the northwestern side of the island was once both the residence of King Sancho of Mallorca as well as a royal charterhouse (in this case a monastery of Carthusian monks). It was a royal palace for most of the fourteenth century until it was given to the Carthusians by Martin of Aragon in 1399. The monks stayed cloistered there until 1835. The Neo-Classical church was built in the middle of the eighteenth century. Famous visitors included Frederic Chopin and George Sand: Chopin composed Preludes Op. 28 while staying in Valldemossa, and Sand wrote the travel novel A Winter in Majorca.
Address: Plaça Cartoixa, 07170 Valldemossa