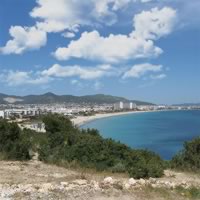 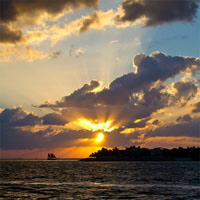 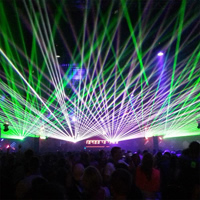 San Antonio is Ibiza's second largest resort and literally overflows with visitors between June and September every year. (Just a 20 minute bus ride from Ibiza Town). For relaxation, solitude and authentic Spanish culture please be warned that this is not the destination for you. However, if you're looking to party with an up-for-it crowd (almost entirely British), then San Antonio de Portmany - 'San An' as it is known by those who love it - will be like heaven.

Aesthetically, San Antonio de Portmany lacks the charm of Ibiza Town, but the town has seen huge investments in recent years as the council has attempted to regenerate the urban center and make it more attractive and stylish. The main promenade is now lined with palm trees, an artificial beach has been created right in the center of the town and tons of trendy new bars have opened in an attempt to inject some of that Ibiza Town chic.

Passeig de la Mar
This is the walk situated around the San Antoni bay (Badia de Portamny). This is pleasant to walk at night. At one end of the walk is situated Sa Punta de Moli (place where an old mill is maintained) and at the other, is San Antonio center with a splendid fountain which coordinates its movements with the music diffused on the public place.

Sunset Strip
If you want to kick back and relax after a hard day of sunning yourself, San Antonio's 'Sunset Strip' is the place to do it. The sunset strip is located on the north side of the town and many of the bars open mid afternoon so by the evening they can be packed full. Here you will find some of the island's most infamous pre-club bars including the legendary Café del Mar. The sunset is one of the famous attraction of San Antonio. The best place to see it is near the famous bars Savannah, Cafe del Mar and Mambo.

San Antonio's new beach was developed by the town council in 2002 and is extremely conveniently located right in front of some of the city's biggest hotels. It has white sand and clear, safe water for swimming in, however, you may have to fight to find yourself a space because it tends to be the first port of call for the majority of San An's visitors.

San Antonio was made for and by its nightlife. This was where the Ibiza party revolution began and continues to live on every summer. The island's most extravagant Super Clubs are found here, and they fight an ongoing battle as to which is the most extravagant. Whether they offer the most impressive looking venues (think glass domes, laser shows and pyramids), the largest number of bars (we're talking up to 20 in one club), the most exciting facilities (fountains, swimming pools, etc) or the world's best DJ's, the clubs which surround Ibiza's San Antonio are undoubtedly among the world's most flamboyant.