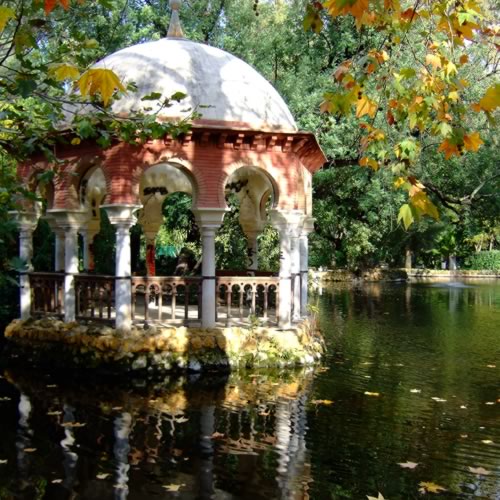 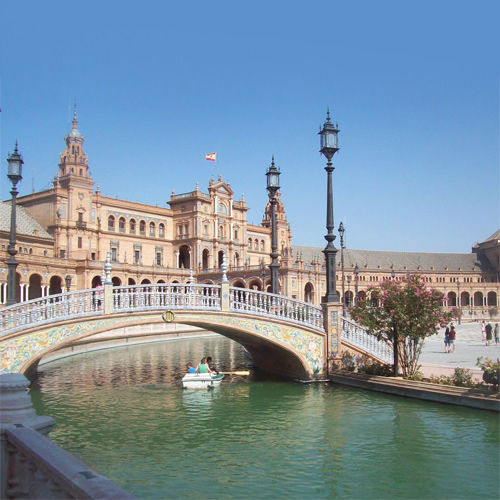 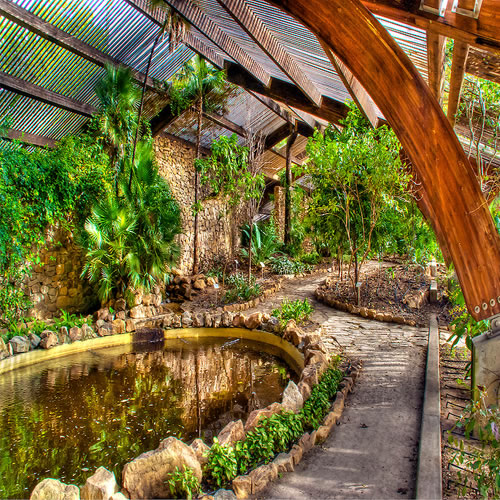 Seville has some of the most beautiful city parks in Europe, such as the Parque de Maria Luisa and the Plaza de España. In addition, there are numerous plazas and open spaces where you can happily people-watch for hours.

The Park was the site of the Expo 1929, which had Plaza de España as its centerpiece. The Parque de Maria Luisa is a idyllic half-mile of palms and orange trees, elms and Mediterranean pines, covered with flower beds and dotted with hidden bowers, ponds and pavilions. Now that the trees and shrubs have reached maturity, the genius of the landscapers can be appreciated - this is one of the loveliest parks in Europe. It offers hundreds of exotic trees lining shady avenues, and historic, fairytale buildings, with exotic touches provided by colorful tiled benches, and Moorish fountains and pools. Large enough never to feel crowded, the park is a delightful place for a quiet stroll, a kids` runabout, or romantic horse-and-carriage or boat ride.

A large part of its squares, circuses and monuments are dedicated to national literary figures, like the Bécquer, Cervantes, Hermanos Machado circuses, etc. and undoubtedly one of its characteristics is the widespread use of fountains, ponds and furniture made from brick and ceramic tiles.

Towards the southern end of the park, two of the grandest pavilions - the Bellas Artes and the Mudéjar - are used as museums. The former contains the city`s archaeology collections - the main exhibits are Roman mosaics and artifacts from nearby Italica, along with a unique Phoenician statuette of Astarte-Tanit, the virgin goddess once worshipped throughout the Mediterranean. The latter houses the Museum of Popular Arts and Customs, with collections of antique lace and tiles, and traditional Andalucian craftsmanship such as tannery, silversmithing and ironwork, with recreated workshops.

This massive building is Seville`s most impressive after the Cathedral, for its sheer scale and grandeur. Plaza de España was built for the Ibero-American Exhibition of 1929 (Expo 29), along with many of the pavilions you can see in and around the Parque de Maria Luisa. It is a semi-circular brick building, Renaissance/neo-Moorish in style, with a tower at either end (tall enough to be visible around the city). The building has a ground level portico and first-floor balustrade with balconies stretching along its length. For taking photos, the balconies are a prime spot, reached by staircases, as you can get the whole sweep of the building. The magnificent central balcony is especially impressive.

All along the wall by the canal are 48 alcoves with benches, one for each province of Spain, each with a relevant tableau and map, all designed on colorful azulejos (painted ceramic tiles). Spanish tourists have photographs taken of themselves with family and friends on their home province`s bench. In a further regional reference, the four bridges represent the four ancient kingdoms of Spain: Castille, Aragon, Navarre and Leon.
In front of the building, following the curve of its façade is a 550 yard canal crossed by four bridges, and in the center of it all is the Plaza itself. You can rent small boats to row in the canal - the Plaza is known as `the Venice of Seville.` A major tourist attraction, it is the finishing point of horse-and-carriage rides.

The plaza forms part of the artistic urban site created for the Ibero-American Exhibition in 1929. This square, the work of Aníbal González situated next to the María Luisa Park, is surrounded by three palaces in different architectural styles that were built for the Ibero-American Exhibition of 1929. The first, in the Neo-gothic style, is the Royal Pavilion. The second, Neo-Mudéjar, houses the Museum of Popular Arts and Customs and the last, Neo-renaissance, is the Provincial Archaeological Museum in which the Carambolo Treasure (the largest find of prehistoric precious metalwork) is preserved.

For a leisurely stroll, it`s hard to beat the Paseo de Colón on the banks of the Guadalquivir river which stretches from the bridge leading to the area of Triana to the magnificent Toro de Oro.

If you want a change of scene and pace - from the fun but hectic center of Seville, especially in the heat of summer, and if you have children, then it`s worth making the short trip over the river to the wonderful gardens on the other side, situated to the north of Triana.

Sandwiched between the Cartuja monastery and Isla Magica, Seville`s theme park, you`ll find two gardens stretched along the banks of the Guadalquivir: Jardin Americano, a botanical garden with specimens from all over the American continent; and Jardines del Guadalquivir, a park with sculptures and various themed areas. Both were built originally for the Expo 92, fell into disrepair and were refurbished, and both reopened in 2010. There`s plenty of space here for little ones to run around safely, with large, shady wooded areas, pools, play areas and a maze.

South of the Barrio Santa Cruz and next to the Real Alcázar, the Jardines de Murillo were built at the beginning of the twentieth century from the reclaimed land that used to house Seville`s city walls. The gardens were named for Bartolomé Esteban Murillo, a noted seventeenth-century painter from Seville. From planning to planting to opening the gardens to the public, the process took 14 years (1909-23). Hundreds of flora species are planted across 90,000 square feet, including Japanese plums, Japanese acacias, Canarian palm trees, bitter orange trees, bougainvilleas, Chinese fan palms, magnolias, cypresses, and honeysuckles, among others.