UNESCO states: `Together these three buildings form a remarkable monumental complex in the heart of Seville.` The cathedral and the Alcázar - dating from the Reconquest of 1248 to the 16th century and imbued with Moorish influences - are an exceptional testimony to the civilization of the Almohads as well as that of Christian Andalusia. The Giralda minaret is the masterpiece of Almohad architecture. It stands next to the cathedral with its five naves; the largest Gothic building in Europe, it houses the tomb of Christopher Columbus. The ancient Lonja, which became the Archivo de Indias, contains valuable documents from the archives of the colonies in the Americas. 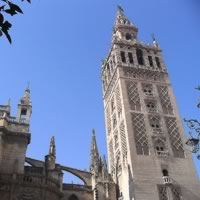 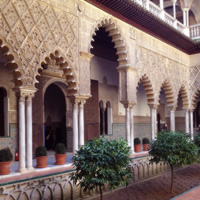 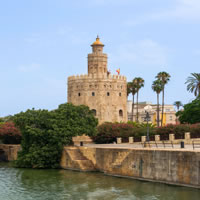 
Seville`s cathedral is the third largest cathedral in the world, and the largest Gothic building in the world. It contains the tomb of Christopher Columbus (Cristobal Colón in Spanish). It stands on the site of the Great Mosque of the 12th century. Today, the only part which remains of this structure is the minaret, also known as the Giralda due to the weather vane added to the top in the 16th century. The Abluciones courtyard and Puerta del Perdón door are also parts of the old mosque.

It was converted into a Christian church when the city was conquered by Ferdinand III of Castile in 1248. Several stages of building can be seen, with examples of the Mudéjar, Gothic, Renaissance, Baroque and Neo-classical styles. It has five naves (the main nave has a height of 118 feet) and a rectangular ground plan, measuring 380 feet. long and 250 feet wide. The transept rises to a maximum height of 130 feet. The main altarpiece was built over a series of different periods, and includes pieces by the brothers Jorge Fernández Alemán and Alejo Fernández, Roque Balduque, Pedro Millán, Juan Bautista Vázquez the Elder and Pedro de Heredia. The Renaissance-style chapter room dates from the second half of the 16th century. The main sacristy is Plateresque. The remains of Christopher Columbus lie in the cathedral.

The old minaret of the Arab mosque. The bell tower, the diminishing niches and the El Giraldillo weather vane were added in the 16th century. The part decorated with bricks is the work of the architect Alí de Gómara. A series of ramps takes visitors up to the bell tower, which offers outstanding views over the city. The Orange Tree Courtyard, in the Almohad style with a Visigoth pool, is to one side.

This is the oldest occupied royal palace in Europe, meaning that the king and queen of Spain still stay here when they visit Seville. Peter I, the Cruel, rebuilt the old Almohad fortress and made it into his royal residence. It suffered serious deterioration with time and had to be refurbished during the reign of Isabel II. The interior of the building is arranged around two courtyards: the courtyard of Las Doncellas, where official life took place, or the Las Muñecas courtyard, for private life. The Ambassadors` Hall is beautifully decorated with plasterwork and tiles. The top floor is accessed by a 16th-century coffered staircase decorated with paintings by Roelas and Madrazo. Highlights include the furniture and the tapestries that decorate the different rooms.

Take your time when you visit the Alcázares, since it is not only a palace but several palaces together, you will be astonished at the incredible combination of different architectural styles. Here, Muslim, Mudejar and Christian constructions fuse together. You can also stroll through the gardens of the Alcázares, where fountains, ponds, colorful flowers and the fragrance of aromatic plants will take you to another time.

The Indies Archive, used to be the Mercaderes Market, was built in 1572. Designed by Juan de Herrera and built by Alonso de Vandelviva and Juan de Minjares. During the 17th century the second floor and the cross of the Oath were constructed; a century later Carlos (Charles) III chose the building as the site for the Indies Archive. There were consequent modifications made to the building including the rebuilding of the main staircase. Inside valuable documents are kept that recreate history of the relationship of Spain with the overseas American colonies. It houses 40,000 documents and maps (including fascinating city plans) referring to voyages to the New World, covering three centuries.

The symbol of Seville! It was given its name (`gold tower`) because it was originally covered in golden tiles. It forms part of the city walls, and stands on the banks of the river. It dates from the year 1220 and houses the Naval Museum, containing models, navigation charts, compasses and ancient documents.