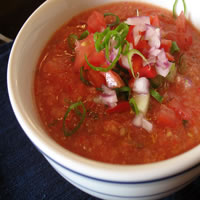 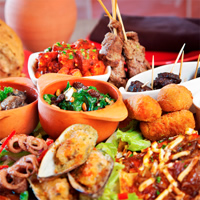 The gastronomy of Granada is a beautiful manifestation of the Moorish influence and the wide variety of raw materials, determined by the great differences of geography and climate in different regions of Granada. The Moors took full advantage of the area`s climate and fertility to grow the products which captivated the caliphs and later, the Christian monarchs. Mixed marriages were common, and in the same way, traditional dishes and recipes from different villages merged together. As the city is near the Sierra Nevada and the Costa del Sol, where tropical fruit is grown,the fish from the sea, country dishes from the Alpujarra and the delicious produce from the vegetable gardens in that area make up a mysterious and pleasant cuisine.

Honey, spices and fruit were adopted as dressings for meat and fish, producing dishes like lamb with apples, gachas with honey, chicken with almonds and trout with pomegranate. Salads and cold soups are another of the region`s specialties. There is something for all tastes: gazpacho, pipirrana, ajoblanco (made here with bean flour), leek and white bean sala, and for meat lovers there is a wide range of "al ajillo” dishes with their touch of garlic, and a variety of seasoning used with suckling kid, rabbit, chicken and hare.

One of the most delicious dishes of Granada is Sacromonte omlette. For it to be authentic it should contain cooked sliced veal brains and bull`s testicles, all diced and finally mixed with beaten eggs. Do not worry; it is usually not made this way.
TAPAS

A visit to Granada is not complete without trying `tapeo granadino` in taverns and bars. The city is famous for its large amount of bars, taverns, cellars, restaurants and tea shops, where you can taste typical products and practice the popular tradition of "going out for tapas". It involves going from one bar to another and enjoying small and varied portions of typical dishes which are often free with your drink, normally local wine or a caña (a small glass of beer).

The tapas are served free in all the province`s bars to wash down a glass of wine or a beer. The tapa is normally chosen by the barman and the customer respectfully accepts his choice. To go out to have tapas with your friends is one of the most popular and ingrained customs in the city. From pieces of cheese, cold meats or cured ham to hot local dishes of Granada: migas con tropezones, callos, habas con jamón, papas a lo pobre o a la furiana, and so on.

There are several areas to enjoy the experience. You can start around Campo del Príncipe , in Realejo quarter, the old Jewish quarter of the Muslim city. Heading in the direction of the Cathedral,is Elvira street with a lot of taverns and bars. Near Elvira street is the Plaza Nueva area, near the Real Chancillería . The Darro River runs under this square, and following is the well known Paseo de los Tristes, where one of the terraces can be enjoyed. The Romanilla Square and the Pescadería Square are both popular places as well.

Granada pastry making is another attraction for the visitor. The Moors introduced sugar cane cultivation in the 8th century. Like honey, which is classified Denomination of Origin, sugar formed part of the recipes that were passed on to the Christians by the Mozarabs and the Mudejars. One of the consequences was the development, in Granada`s convents and monasteries, of one of the region`s most attractive culinary items: confectionery. There are as many varieties of sweet cakes as there are convents and religious orders. It is worth visiting Santa Fe just for the little Pionono sweets, named after Pope Pius IX. The moles eggs of the San Antón nuns or the almond tortas of the Tomasas order will delight your taste buds. You won`t want to miss the delicious syrup cakes made by the Comendadoras of Santiago and at the Monasterio de San jerónimo the cocas yemadas of San Bernardo del Císter; nor should you miss trying the Santa Catalina "saint`s bones”, and the hojarasca biscuit of Santa Isabel la Real, among other delights.

The Jewish influence can be seen in Granada´s pastries, too. Dry grape cakes, fried hojuelas or syrup mixed with honey and sugar were originally prepared in aljamas. Many of these recipes of the sefardic, mozarabic and mudejar communities were passed on to the Christian community.

The historic quarter of El Albaicín in Granada is home to many teterías, so as well as soaking up the atmosphere of centuries past in the Alhambra and other monuments of worldwide historic importance, you can also stop off for refreshments in one of these delightful establishments. Caldereria Nueva (known as La Calle de las Teterias) is a pedestrian street that seems have devoted exclusively to Arab tea houses, Moorish craft shops and stalls. This street is the street is literally lined with tea-rooms. There you can find aromatic teas, Moorish pastries, pancakes and other light refreshments.

The informal, relaxed atmosphere attracts people from all walks of life, including many students. Granada is an important University City and during term time almost 25 percent of the population is represented by students.

In recent years, as a result of the work and enthusiasm of small winemakers, the Granada wine scene has changed radically towards the production of quality wines that are well received by the market.
A leading role in this success has been played by the adaptation to new winemaking techniques, the planting of noble varieties, the recovery of local gems, such as Vigiriega, and the exquisite care shown to vineyards. Also contributing is the advantageous and unique geography features of the province, with high altitude vineyards subject to great climatic contrasts and blessed with abundant sunshine.

The results are wines with a strong personality produced with great care and craftsmanship: fresh and fragrant whites, flavorful reds of great complexity and sparkling wines with fine bubbles and elegant acidity.