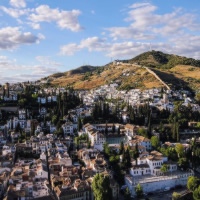 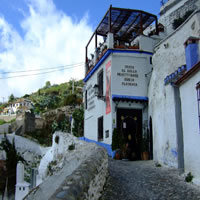 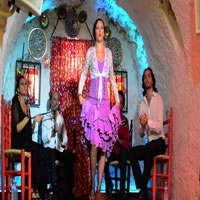 The Sacromonte is famous for the gypsy caves, but the gypsies were neither the first nor the last people to live in them. Long before the Oriental nomads arrived in Spain, the Arabs had discovered that the soft stone of the hill was ideal for carving out underground homes, and gypsies simply moved into them after the conquest, as the Moriscos were expelled. In the 19th century, writers and artists of the Romantic Movement, most of them English and French travelers in search of picturesque oddities, immortalized the gypsies of the Sacromonte, who also inspired poets such as Lorca and De Falla. Today it houses the artists and intellectuals. The streets are nicely paved and the caves have kitchens, toilets and telephones - some even have the Internet connections.

The more picturesque and scenic part of the Sacromonte is a little higher at the charming walkway called Vereda de Enmedio, which overlooks the city like a balcony, with unforgettable views of the Albaicin and the Alhambra. The Cuesta de Chapiz is where the gypsy flamenco caves or zambras, are located.

If you fancy a bit of exercise it`s worth walking up to the Sacromonte Abbey. This is where you will get some of the best sunset views in Granada.

Flamenco in Sacromonte Caves
The Sacromonte is next to the Albaicín and is most famous for its caves and flamenco. The typical image of Spain and Andalucía is of dark haired women dressed in flamenco dresses dancing like a dervish, accompanied by hand clapping and wailing flamenco music, does actually exist in the Sacromonte.

The gypsies arrived about 600 years ago and one of the places where they congregated was in the caves of the Sacromonte. The mixture of Arabic influence combined with the particular lifestyle and temperament of the gypsies created Flamenco. It was influenced by a fusion of different cultures: Arab, Jewish and Christian. There are daily flamenco shows in Sacromonte and Albaycin, some geared towards tourists in beautifully decorated caves, whereas other shows can take place in authentic but simply decorated premises.

If you are interested in flamenco, it is a must to visit one of the Sacromonte`s zambras, see a flamenco show in the Albaicin, or enjoy a meal and a real live flamenco show in one of the flamenco restaurants in Granada.
The Zambra, word comes from Arabic, was the way to celebrate the rite among the Gypsies and was banned across different eras. They would last all night.