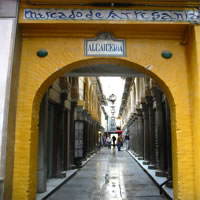 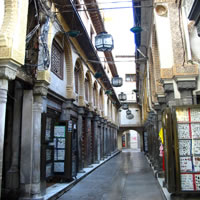 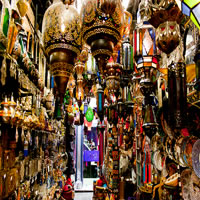 The Alcaicería, home of the Great Bazaar of Granada, was originally a series of streets between Plaza Nueva and Plaza Bib-Rambla, bursting with stalls selling Arabic silks, spices and other precious goods. Nowadays the only remaining section is Calle Alcaiceria, beginning just off the Calle Reyes Catolicos, and extending back as far as the Cathedral. It is an area rich with history and local culture, still packed with interesting, exotic things to buy.

The Bazaar was one of few Moorish traditions to survive the Christian conquest; Bazaars existed not only in Granada but across the Christian realm. The original Alcaicería of Granada was built in the 15th century, and survived until the 19th century, when a fire sadly destroyed it. A replica was built, less than half of its original size, and was a cheaper, modern version of the Moorish style . Unlike the current Alcaicería, the original was home to more than 200 shops squeezed into a labyrinth of streets and alleyways. Each was very small and had a red ochre colored door, which was tilted upwards to open; when opened the door sat above the stall, providing an awning to protect the silks in the event of rain. The streets of the Alcaiceria were sealed by iron gates, to prevent guards and noblemen from entering on horseback, and were locked overnight to protect the precious goods and artifacts on sale inside.

These days the Alcaicería is home to Granada`s souvenir stalls, selling a variety of Arabic craftwork, such as the fajalauza (traditional local painted ceramics), taracea (wooden inlay, in items such as desks, chessboards, or trinket boxes), and typical granadino farolas (stained-glass lamps). Take care when walking around this area; it is popular with pickpockets and local gitanas (gypsy women) offering to tell your future or read your palm, for a price. You can also have your name written in Arabic script.