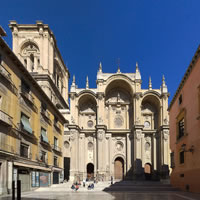 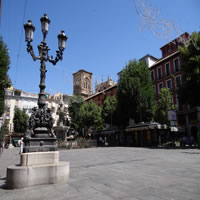 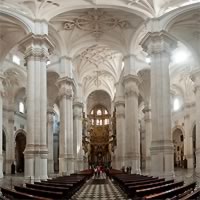 The Cathedral is located in the center of the Muslim area and dates back to 1523. It has a nave and four aisles, a crossing and circular apse. Alonso Cano built the main façade with sculptures by Duque Cornejo, Risueño and Verdiguier while the only tower of the two planned ended up half finished. On the northern side, there is La Puerta del Perdón, a magnificent work of Diego de Siloé who also built La Puerta de San Jerónimo. The chancel is not only stunning, but includes skillful architectural solutions provided by Siloé. Its circular plan and great height contain semi-circular arches upon which a double series of balconies rest. The glass windows of the upper part add light and color to the whole. Medrano and Mena sculpted the statues of the Catholic Monarchs and Alonso Cano the busts of Adam and Eve. The side chapels contain marvelous works of art. In the sacristy, there is a figure of Christ by Martinez Montañes, an Annunciation and a valued image of the Virgin Mary by Alonso Cano, together with other valuable objects of the Cathedral Museum and Treasure.

At the center of Granada stands the Gothic Cathedral of Santa María de la Encarnación (1523-1703), containing the Royal Chapel (Capilla Real) with the tomb of Ferdinand and Isabella. The Catholic Monarchs founded the Royal Chapel for their own tombs. They chose to be buried in Granada because they saw its conquest as the crowning achievement of their reign. It was started in 1505 following a design by Enrique Egas and was completed in 1521. The northern façade is by Garcia Pradas, and provides access to the interior; a plan in the shape of a Latin cross with four side chapels. The crossing with the royal mausoleums is separated from the rest of the nave by a wrought iron screen, a real work of art by Master Bartolomé. The tomb of the catholic monarchs on the right was built by Domenico Fancelli, and on the left by Bartolomé Ordoñez using carrar marble. The chapel has a museum in the sacristy with paintings by Membling, van der Weyden, Botticelli and Beruguete. The paintings belonged to the collection of Queen Isabella, whose crown and scepter, together with King Fernando´s sword are kept here.

History of the Royal Chapel
Isabel of Castille wanted a small, humble mausoleum for her and all her descendants, befitting the follower of Saint Francis which she was. But she died before the chapel could be built, and, in the company of Ferdinand, spent some twenty years in a provisional tomb inside the Alhambra walls, where a Franciscan monastery had been installed in the shell of the palace mosque (it is now an elegant hotel, the Parador San Francisco, well worth visiting even if you can`t afford to stay there). The architects made the chapel-mausoleum larger and more luxurious than planned, with the result that it is neither humble nor truly grand; in any case, her successor and grandson Carlos V - the master of the new Empire which she had founded - judged it too modest for the masters of a reign on which the sun never set, and the Royal Pantheon for all subsequent monarchs was eventually moved to the blockbuster Escorial Monastery outside Madrid, built by his son Felipe II, who knew how to do things on the right scale!

No place is more emblematic of the ´´Christian´´ part of the city. Surrounded by 19th Century town houses, shaded by leafy lime trees - and in the midst of a large pedestrian zone - the Plaza Bib-Rambla is the real heart of the city´s social life. The center of this charming plaza is decorated with a baroque fountain, consisting of a circle of grotesque figures spurting water - known as the gigantones - bearing on their hunched shoulders a rather undersized statue of Neptune. Much of the square is in the warm months filled with sidewalk cafes, where you can enjoy hot chocolate and churros, and, on summer afternoons freshly made horchata de chufas, a refreshing milkshake made of a root called a ´´earth almond´´.

The market district further west sprawls over the lively Plaza de la Pescaderia (the fishmongers square) and the narrow streets which lead off to the right near the Cathedral. Returning to the Plaza Bibarrambla, we see the cathedral´s single bell tower jutting up over the facades of the north side of the square, in the center of which is the tiny arched entrance to the old Moorish market, the Alcaiceria.

This hospital is a gothic building, founded by the Catholic Monarchs- Isabella and Fernando- it has a Renaissance façade with Plateresque decoration and a Baroque portico as well as beautiful courtyards and coffered ceilings, they commissioned the building in 1504 and it was designed by the architect Enrique Egas, and was built in 1511. There is a large fountain in front centered by a grand monumental column.

It has had a variety of purposes over the years. Originally it served as a hospital for the poor pilgrims and soldiers who had been injured during the conquest of Granada. Then, from 1536, it was also used as a prison for the insane; the infamous San Juan de Dios was kept here for a time when he was considered insane. Much later, it was also used to treat people from all over the country suffering from the effects of venereal diseases, especially syphilis, which was rife at the time.

Monasterio de Nuestra Señora de la Asuncion - more commonly known as La Cartuja of Granada - is a monastery which once housed Carthusian monks. La Cartuja has been described as "the grandest and most outrageously decorated Carthusian monastery in Spain", which seems quite a statement taking into account the competition. The main attraction is its baroque church.

Next to the chapels is the Church, which is separated into three sections: the first for the public, the second for the laymen, and the third for the monks. Between the laymen and the monks are wooden benches designed for the choir, with two ornate altar pieces, containing paintings by Sanchez Cotan. There is also a glass door embedded with tortoiseshell, marble, silver, ivory, and guayacan wood (lignum vitae) which was made by Friar Jose Manuel Vazquez. The walls are decorated with paintings and statues. At the front of the Church is the Presbytery, which is the most elaborately decorated area of the monastery - there are four sculptures: the Carthusian Bishop, St John the Baptist, St Bruno and St Hugo. There are also four paintings by Sanchez Cotan depicting scenes of passion and, in the center, a piece by Bocanegra, La Asunción de Nuestra Señora - The Ascension of Our Lady. The main altar is covered with a canopy of wood and mirrors. Behind the Presbytery is the Sancta Sanctorum, which is separated from the main temple by a Venetian glass gate. The architecture, art and sculptures together make one of the most beautiful and interesting baroque works in all of Spain; the statues even appear to have real tears. It was created by Francisco Hurtado Izquierdo between 1704 and 1720. To the left of the Presbytery is the Sacristy, designed by Hurtado Izquierdo and built between 1727 and 1764. Its structure and proportions make it look like a small church. In form, decoration, lighting and color it seems inconsistent with the rest of the building - excessively baroque and dark. The floor is marble, and the paintings and colors undo the earlier illusion of its size.

This monument is often overlooked by tourists in Granada, as it sits away from the main sites, but it is well worth a visit.