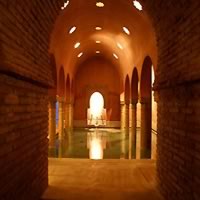 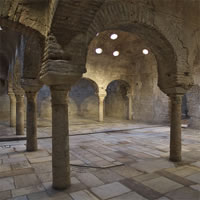 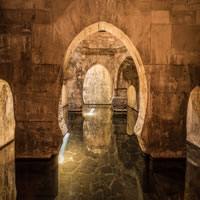 The Arab Baths are one of the most important historic and architectural aspects of Granada, as they are symbolic evidence of the city`s religious turmoil all those centuries ago. The baths were built by the Muslims because they believed water was a symbol of purity, and so used it to cleanse their bodies, whilst the Christians, on the other hand, believed this to be decadent and heathen behavior, and so had the majority destroyed, with only a few remaining. The public bath houses in Granada take the Arabic name hammam.

The water which served El Bañuelo came from the nearby River Darro. This bath house is unique because it is still completely intact, and it is one of the most ancient baths still standing in Spain. It is one of the only Arab bath houses not destroyed by the Christians, who considered bathing so often and in such a public manner to be excessive and decadent; they also believed it reduced masculinity.

Royal Baths at the Alhambra

The Alhambra`s Royal Baths are situated between the Tower of Comares and the Courtyard of the Lions. These are the only remaining baths of the eight which originally served the 2,000 or so inhabitants of the Alhambra. The baths are perfectly preserved, again left by the Christians as an example of Islamic heathenism. The royal bath is still functional but is not ornamentally decorated, as bathing was a religious and sanitary requirement, not a luxury. The bath house is set out in accordance with the original Roman specifications, with a cold, warm and hot room. The bath house has the same star-shaped vents in the roof, and when the heat in the bath chambers became unbearable, slaves were sent up to the roof to open them, allowing the steam to escape.