El Albaicín is the old Moorish quarter of the city. It`s located on a hill facing the Alhambra and there are dramatic views of this area from the palace`s famous rose gardens. It is characterized by cobble stoned streets with `cármenes` (houses with a garden). Steep and narrow streets lead to old mosques on which churches have been built (San Salvador, San Bartolomé or San José) and small squares such as San Nicolás and San Cristóbal. These two squares have beautiful views of the Alhambra and the peaks of the Sierra Nevada Mountains. The Albaicín is an oil painter`s paradise and almost at every turn of the head there is an attractive view, almost always involving glimpses of the Alhambra.

Between the walls, Elvira Gate and Carrera del Darro, the Albaicín neighborhood hides many other treasures. The Arab baths (El Bañuelo), the Mudejar decoration of the Santa Isabel la Real Convent, the Renaissance floor plan of the Córdova palace and of the Santa Catalina de Siena Convent, or the impressive façade of the Real Chancellery are some of them.

Granada`s Andalusí heritage can also be experienced at the mirador (viewpoint) de San Nicolás. This is the local people`s favorite spot to look out over the Alhambra. As the sun sets, the palatial citadel is at its very best, seeming to emerge from the mountainside - an imposing image, difficult to forget.
The Albaicin became a UNESCO World Heritige site in 1994. 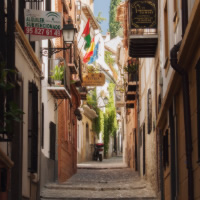 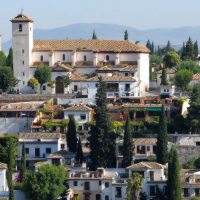 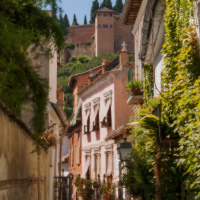 When the Moors were driven by the Christians out of the city of Baeza, near Jaen, in the 13th century, they fled to Granada and re-settled on the northern part of the hill, creating a suburb which took on the name of their former home. Most of what we now call Albaicin was in fact the Alcazaba, the Moorish citadel, stretching from the Colegiata del Salvador to the Plaza San Miguel Bajo. Only the western wall of this fortress still exists (it`s best seen from the Mirador San Cristobal); the castle keep stood on what is now the Plaza San Nicolás. It was only after the fall of Cordoba, in 1236, that the center of Moorish power was transferred to Granada - bringing a massive influx of nobles, architects and money which led to the construction of a fabulous new castle on the hill across the river valley: the Alhambra, Calat-Al-Hama or "The Red Castle", so called for its reddish stone.

Although most of the Albaicin`s churches are built on the foundations of Moorish mosques, and many have conserved their external cisterns for the ritual washing of the faithful, little remains intact from the 8 centuries of Moorish occupation, apart from the great city, the western walls, several interesting minarets-converted-into-bell-towers (the most precious of which is the Alminar de San José) and the courtyard of what was once the Albaicin`s Great Mosque, now attached to the church of the Colegiata del Salvador. The story of this church tells us much about Andalucía`s difficult transition from Islam to Christianity. It was created as a school - colegiata - to evangelize the Moors, and located in the heart of their medina, although there was such popular resistance that the priests abandoned it repeatedly. The inner courtyard, El Patio de los Naranjos, is one of Granada`s finest examples of early (10th century) Moorish architecture (the courtyard can only be visited when the church is open for Mass).