When the Spanish re-conquered Granada in 1492, the city`s last Arabic ruler, Boabdil, was seen by his mother to weep as he fled his beloved Alhambra palace. The legend has it that she turned to him to say: `Do not weep like a woman for what you could not defend like a man.`

The Alhambra is one of the most brilliant jewels of universal architecture, a series of palaces and gardens built under the Nazari Dynasty in the 14th C. This mighty compound of buildings, including the summer palace called Generalife - with its fountains and gardens, stands at the foot of Spain`s highest mountain range, the Sierra Nevada, and overlooks the city below and the fertile plain of Granada. The Alhambra together with the Generalife Gardens represents the zenith of Arab art, one of the most visited monuments in the world, and certainly the most visited in Spain.

Built atop a red-colored hill that dominates the city and plain of Granada, everything in the Alhambra was designed to reach perfection: from the ancient `Alcázar,` or military fortress, to the Royal Nasrid Palaces, decorated in plaster and tile work, with inscriptions from the Koran that evoke the notion of Heaven on Earth. The famous Patio de los Leones (Lions` Patio) or the Cámara de la Sultana (Sultana`s Chamber) are examples of this poetic architecture that feeds the imagination.

Aside from its intricate decoration, water is a fundamental element, ever-present and used throughout the site as if it were another architectural tool. The whisper of fresh water from the Alhambra`s numerous fountains and ponds create a cool interior microclimate: you will notice the difference in temperature between this magical site and the rest of Granada. 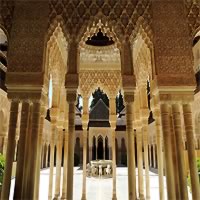 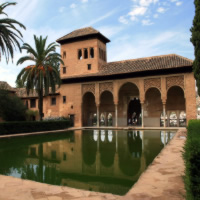 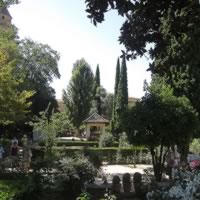 History of the Alhambra

The name Alhambra comes from an Arabic root which means `red or crimson castle,` perhaps due to the hue of the towers and walls that surround the entire hill of La Sabica which by starlight is silver but by sunlight is transformed into gold. Created originally for military purposes, the Alhambra was an `alcazaba` (fortress), an `alcázar` (palace) and a small `medina` (city), all in one. This triple character helps to explain many distinctive features of the monument.

There is no reference to the Alhambra as being a residence of kings until the 13th century, even though the fortress had existed since the 9th century. The first kings of Granada, the Zirites, had their castles and palaces on the hill of the Albaicin, and nothing remains of them. The Nasrites were probably the emirs who built the Alhambra, starting in 1238.

The Alhambra became a Christian court in 1492 when the Catholic Monarchs (Ferdinand and Isabel) conquered the city of Granada. Later, various structures were built for prominent civilians as well as military garrisons, a church and a Franciscan monastery.

Emperor Charles V, who spent several months in Granada, began the construction of the palace which bears his name and made some alterations to the interior buildings. During the 18th century and part of the 19th, the Alhambra fell into neglect and was to see its salons converted into dungheaps and taverns, occupied by thieves and beggars. As the crowning blow, Napoleon`s troops, masters of Granada from 1808 until 1812, were to convert the palaces into barracks. And so the incredible neglect continued, until 1870 when the Alhambra was declared a national monument. Travelers and romantic artists of all countries had railed against those who scorned the most beautiful of their monuments. Since that date and up to now, the Alhambra, protected, restored, cared for and even improved, has been preserved for the pleasure and admiration of all.

The Alhambra became an UNESCO World Heritages site in 1984.