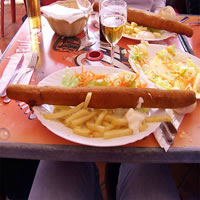 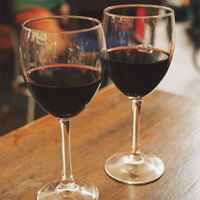 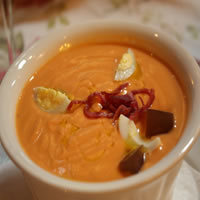 History`s influence is still fully a part of Cordoba`s gastronomy. The Romans introduced the use of olive oil, which is widely used and highly-prized in this area, and set the norms for what would later become known as Mediterranean cuisine. The Arabs added the use of almonds, nuts and raisins with the meat and vegetable stew; the mixture of sweet and sour flavors and finally in cakes and sweets, which were also influenced by Jewish culinary traditions. The Jewish left some of their own dishes, like the "cazuela de habas secas con berenjenas” (dried beans and eggplant), "Gazpacho blanco de harina de habas”, etc. The arrival of the Christians brought an increased use of meat as well as maintaining the best culinary traditions from the cultures previous to the conquest.

Córdoba also excels thanks to its position in a triangle formed by the Sierra Morena, source of excellent game and pata negra ham from Los Pedroches, the vineyards of Montilla-Moríles, where fino and dessert wine are produced; and the olive groves of La Subbética. There`s plenty of fresh fish, too, brought from the nearby Mediterranean. In summer, a profusion of quality vegetables ripen and are added to the mix.
TAPAS

Cordoba is one of the best towns for Tapeo. You can find a large variety of excellent Tapas at every type of taverns, from the very plain to the very modern. In 1721 Cordoba already had more than 143 Taverns. Nearly all the taverns have a shaded internal patio to escape the merciless summer heat – akin to the courtyard restaurants of Damascus, hardly surprising as it was the Umayyad dynasty from that city which founded Córdoba back in the 8th century.

Be sure to try:
Salmorejo
Salmorejo is the gastronomic barometer of a Córdoban tavern. It is made from tomatoes, bread, oil, garlic and vinegar. Normally, the tomatoes are skinned and then puréed with the other ingredients. The purée is served cold and may be garnished with diced Spanish serrano ham and diced hard-boiled eggs. Salmorejo is more pink-orange in appearance than gazpacho, and is also much thicker and creamier in texture, because it includes more bread.
Flamenquin
The flamenquín consists of pieces of pork loin wrapped with slices of jamón serrano, coated with breadcrumbs and egg and then deep-fried. It is often garnished with French fries and mayonnaise. A common variation replaces the loin with boiled ham. It can also be made with other fillings, such as cheese, or sausage. The size of the finished roll ranges from a small ball up to pieces 16 inches long, and can be served sliced or whole.
Rabo de Toro
One of the most popular dishes in Cordoba is `El rabo de toro` (the Bull`s tail). Dating back to Roman times, rabo de toro is a stew made with the bull`s tail; its jelly makes the sauce thicker. It is properly ready to eat when the meat is coming away from the bone.

The Montilla-Moriles wine region is situated in the province of Córdoba and covers an area of 7,742 hectares. The Montilla-Moriles wine region consists of 95 vineyards (Bodegas), which produce 24.4 millon liter of wine annually.
The biggest and oldest winery in the area is Alvear, which can trace its origins back to 1729. They make the best-selling dry fino. Alvear and other wineries in Montilla-Moriles also make interesting olorosos, amontillados and sweet wines which are well worth seeking out. In 1999 Alvear`s Pedro Ximenez 1830 was voted by Spanish critics as the best wine in Spain.

The grape used in Montilla-Moriles white wine is predominately Pedro Ximénez, ( as opposed to the Palomino used in Jerez. Other grape varieties used are Layrén, Baladí, Moscatel and Torrontés. Red wine grape varieties are Tempranillo, Syrah and Cabernet Sauvignon.

The `fino` of Montilla-Moriles possesses a continental aroma of thyme and rosemary. The palette is hazelnut, against that of Jerez which is Almond, and of aromas of olive and of a very dry taste. The wines of Montilla-Moriles have more body than those of Jerez having a stronger aroma, with lower acidity, less dry and less bitter. The reason for the differences is that the vineyards are further from the sea.