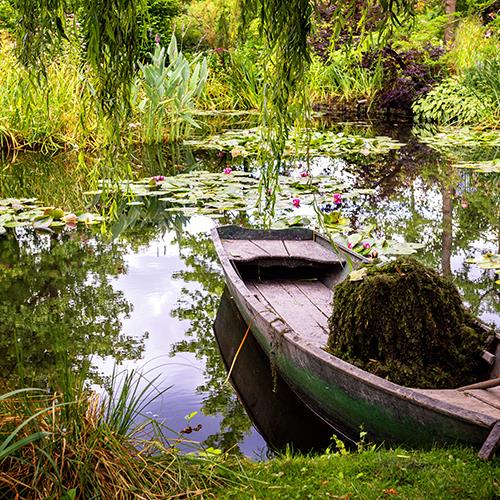 The village of Giverny is where Impressionist painter Claude Monet lived and worked from 1883 until his death in 1926. The artist's former home and elaborate gardens, where he produced his famed water lily series, are now the Foundation Claude Monet museum. Nearby, the Museum of Impressionism Giverny highlights the Impressionist art movement.

The picturesque village and its surroundings have even more to offer. Take a stroll of the charming country houses that rival Monet's. Giverny also remains the home of many modern-day Impressionist artists who have set up their own small private galleries. 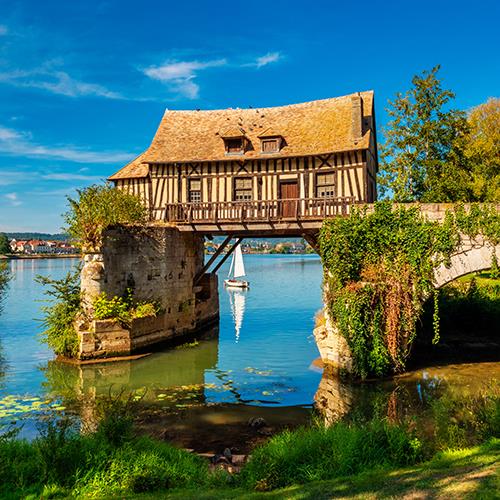 The quaint and charming town of Vernon, situated on the river Seine, boast a myriad of old streets with timber-framed houses from the 1100s up to the 1600s, along with its gothic church, fine arts museum, 12th century castles and the famous old mill. The oldest bits are around the collegiate church. The newer, residential parts of Vernon are still historic, and are a little grander, with long, narrow-straight avenues like Victor Hugo and l'Ardeche flanked by lime trees. The town is also home to many lovely shops, little cafes and restaurants. 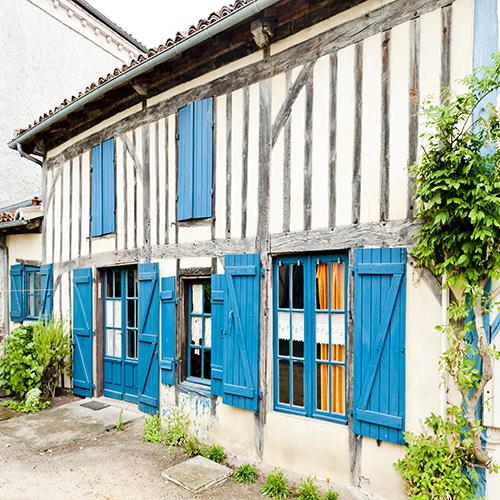 On the borders of Beauce and Hurepoix, Saint-Symphorien is located in the Gironde department and Nouvelle-Aquitaine region. The Château d'Esclimont has made a major contribution to its history, but the village's past intersected, in 1944, with the person of General Patton, commander of the 3rd American Army who liberated the village. Colonel Guy de La Vasselais, who became mayor of the village in 1948, accompanied Patton throughout his campaign for liberation in Europe. At the entrance of the village, the first milestone dating from 1948 has been restored on the occasion of the 50th anniversary of "the way to freedom." 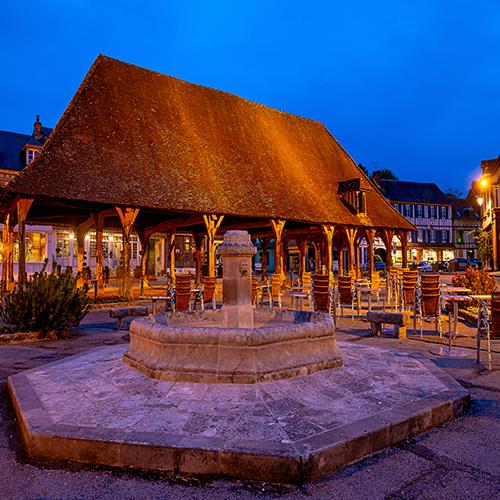 Situated in a peaceful, verdant setting at the heart of the state-owned forest of Lyons. The charming village of Lyons-la-Foret is the former place of residence of the Dukes of Normandy which is now listed among the most beautiful villages of France. Its central square is delightfully picturesque, with its old half-timbered facades, 18th-century wooden market halls, fountains and cafes with terraces providing an ideal place to take in the beautiful atmosphere.

Explore the remarkable historical and natural heritage. Its 17th and 18th century half-timbered houses and its streets create a circle around the former feudal motte. Former monasteries by the river Lieure, watermills, the Hôtel de la Maréchaussée dot the heritage trail that takes visitors to the heart of the turbulent history of this village. At the start of day, you will see this charming village come to life around the covered market (dating back to the 15th and 18th centuries) that holds markets, art exhibitions and other events. The small village surrounded by the largest beech grove in France, which offers numerous walking trails. Lyons-la-Foret is also awarded the “Station Verte” (Green Holiday Resort) certification and 4 flowers in the “French towns and villages in bloom” competition. 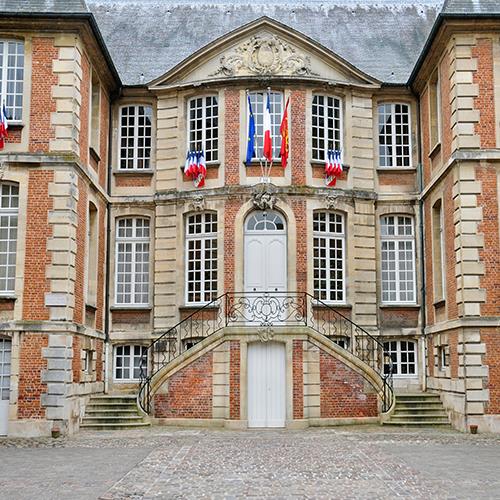 The small village of Pont l'Eveque, between Lisieux and Deauville, boasts beautiful houses, and old and restored buildings to admire. The famous Pont l'Eveque cheese is no longer made here, so there are no factories to visit. Make sure to visit the Saint-Michel church, the cultural museum of the Dominican monks, and the old prison (behind the courts). 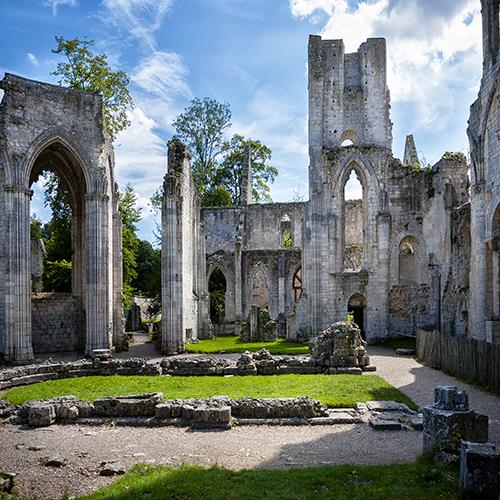 The tiny village of Jumieges, on the bank of the Seine, is bordered by forests, now belonging to the Regional Natural Park of the Loops of the Normand Sein. Its reputation is due to the presence of the rich vestiges of the abbey founded in the 7th century which allowed the agricultural development of the neighboring lands. The Jumièges Abbey is one of the most beautiful, romantic and outstanding ruins in France. In the abbey’s heyday, few religious establishments in France were more renowned, more powerful, or more charitable. During the 19th- and 20th-century, the abbey found a certain prestige and became a Mecca for tourism in Normandy. 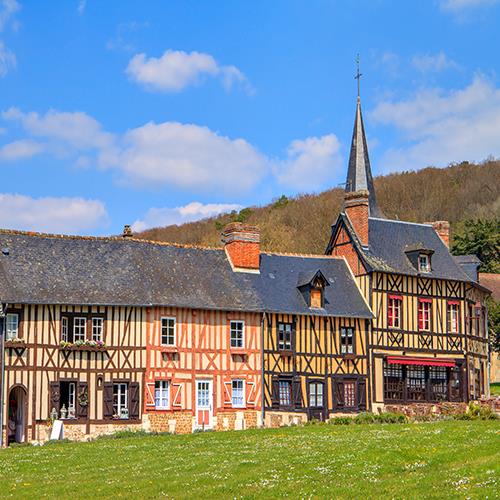 The village of Le Bec-Hellouin has a profound religious past that can still be felt as well as seen. Justifiably, it has also been listed among the 'most beautiful villages in France.' The Abbaye Notre-Dame du Bec was founded around 1034 by a man called Hellouin, or Herluin, who had previously served as a knight under the Norman Count of Brionne before converting to the monastic life. The abbey quickly rose to become a major Christian center thanks to two exceptionally powerful religious men. The abbey is still lived in by Benedictine monks whose production of hand-made pottery contributes to its present-day reputation. 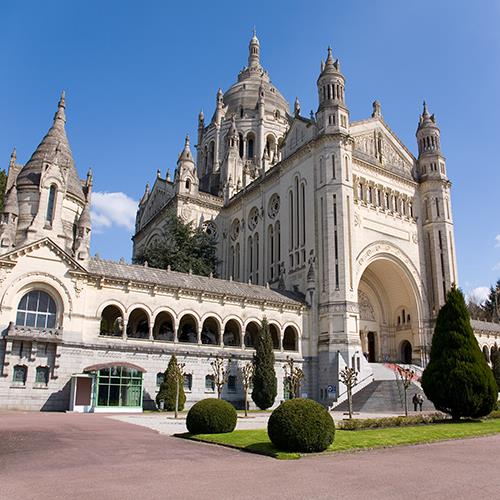 This sacred town in Normandy’s Calvados department hardly needs introduction for Catholics as it’s France’s second pilgrimage site behind Lourdes. The 19th-century Saint Thérèse spent nearly all her life in the Lisieux, first in an idyllic house with her father and then at the Carmelite convent from the age of 14. If you’re following in her footsteps there’s a number of Thérèse-related sites around the town and is said to be one of the most visited pilgrim centers in France. Lisieux is also known for making Calvados apple brandy and some of France's most prized cheeses, as well as an acclaimed zoo, a sophisticated chateaux and the chic resort of Deaveille just a short distance away. 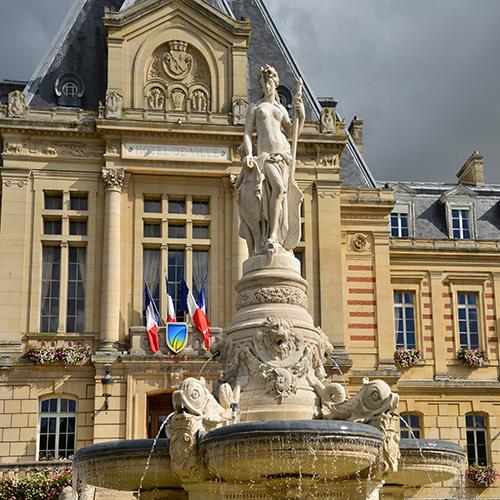 Tucked away in the pretty Iton valley, the capital of the Eure department, Evreux often surprises visitors not only with its heritage but also with its relaxed French way of life, and warm welcome. Evreux has retained a great many of its historic buildings, with its imposing and fabulous cathedral dominating the town to this day, despite the damage inflicted upon the town in WWII. The cathedral reflects all the main developments in medieval and Renaissance architecture and attracts thousands of visitors every year. 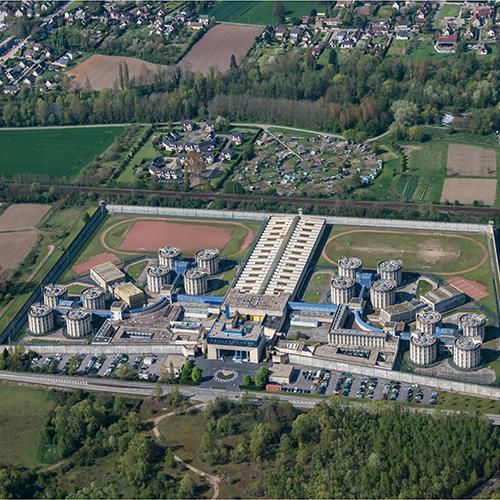 Val-de-Reuil is a town in the Normandy region in the department of Eure. It is located in the district of Andelys, and is one of nine new cities of France created in the early 1970s. The city is lively and charming with a number of monuments to be discovered. Visitors will also find the Peace Monument here, inaugurated in the 1990s, it was at the request of veterans who wanted a place of memory. 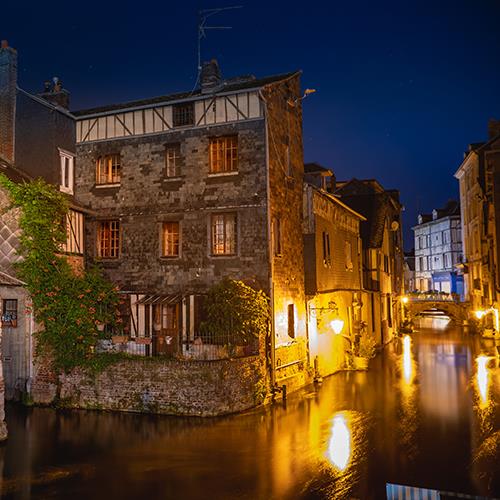 The small town of Pont-Audemer, also known as Norman Venice, stands in a lovely spot between two arms of the River Risle joined together by canals. The many waterways that run through the charming historic center add to the beauty of the town. The half-timbered houses reflected in the water of the Risle, the small bridges over the canals, the tanners' old washing and drying houses, and the Church of St. Ouen, which combines Romanesque, Gothic and Renaissance styles, are some of the many attractions to discover as you stroll through the town.