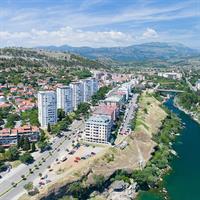 Nova Varos is also known as New Town, this neighborhood roughly corresponds to the traditional city center of the capital city of Podgorica. The administrative and socio-cultural heart of the city bounded by Ivana Crnojevica Blvd to the north, Svetog Petra Cetinjskog Blvd to the south, Stanka Dragojevica Blvd to the west, and the beautiful Ribnica River to the east. The neighborhood has seen plenty of new development over the years with lots of high rise buildings, new hotels and other accommodation options available. There are plenty of dining options found in the New Town including authentic local restaurants, charming cafes with outdoor seating, pubs, and bars. The Montenegrin National Theatre is also located here. New Town is also home to most of the city's cafes, nightclubs, and retail establishments. The Square of the Republic, which is traditionally considered to be the heart of the city, is positioned in the center of this neighborhood. 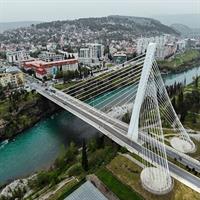 Stara Varos, is also known as Old Town, is an Ottoman-era neighborhood in Podgorica, it was the core of the city between the 15th-19th century. The neighborhood was badly damaged during the bombing of Podgorica during World War II. An old Turkish town where the historic clock tower stands and narrow winding streets lead through the shopping district decorated by jewelry shops, restaurants, and boutiques. The neighborhood has an authentic feel and is a great location to stay when visiting the city, the hotels and other accommodations here are within walking distance to most of the points of interest including two of the city's mosques. This historical neighborhood boasts the last remaining remnants of Ottoman architecture in Podgorica. 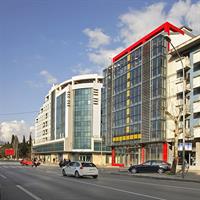 On the outskirts of the city, there are some great accommodations available, some found close to the airport which is less than 8 miles away from the city center, and others in quieter residential areas. There are hotels, motels, apartments, and villas for rent on the outskirts, and with public transportation, or a taxi, the city can be reached within minutes. Prices on the outskirts can be relatively cheap with the possibility of a hotel room for €20 - 25 a night.