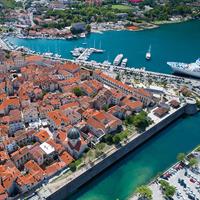 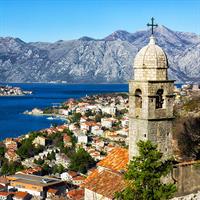 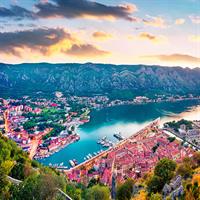 Visiting the medieval fortified city of Kotor is a dream come true, nestled at the base of the soaring cliffs and mountains of Montenegro in the beautiful Bay of Kotor, the gem of a town truly shines and leaves quite the impression on its visitors. Kotor has a long, deep, and fascinating history, with the heart of town characterized by its authentic Old Town, a walled city featuring quaint, narrow, cobblestoned streets framed by towering mountains.

Kotor lies along the idyllic Montenegrin coastline boasting a beautiful port and the stunning natural setting of the Bay of Kotor, which leads out to the Adriatic Sea. The picture-perfect town is famed for its medieval heritage structures, with an Old Town surrounded by fortified walls, and topped by an ancient fortress. There are hidden gems around every corner with a quirky cat museum, a 17th-century watchmaker's shop, charming squares filled with quaint cafes, ancient churches, museums, and fun shops.

At night the city is elegantly illuminated bringing a romantic atmosphere and special ambiance to the sights and attractions. Wandering around the city or the port at night is a wonderful experience with options to dine at excellent restaurants, great bars, and visit the shops. The historic streets buzz with activity after dark with open-air restaurants, authentic bars, live music, and castle top clubbing.

Kotor is one of the best-preserved medieval old towns in the Adriatic and a double UNESCO World Heritage Site. The city has seen an influx of tourists since the early 2000s and is a popular cruise ship port with numerous historic and fascinating sights to see and explore. Numerous churches and cathedrals adorn the town including the Cathedral of Saint Tryphon in old town dating back to 1166, walking along the 3 mile stretch of ancient city walls up to St. John’s Fortress rewards you with remarkable scenic views. 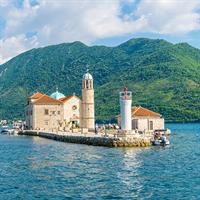 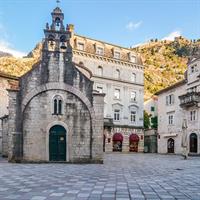 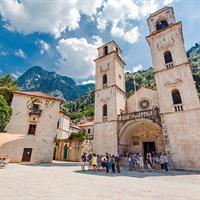 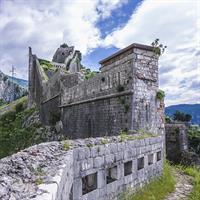 Things to see and do

The tiny town is packed with sights and attractions to keep visitors entertained. The first stop should be the historic walled center of the city, Old Town with its charming narrow, winding cobblestone streets dotted with cafes, churches, museums, shops, restaurants, and endless charm - There is so much to see and do!

Exploring the most beautiful and best-preserved town in Montenegro is a fascinating experience, Kotor embodies the magical spirit of the Venetian empire which ruled over the city for almost 400 years, the past and present united perfectly.

The Fortifications of Kotor are an integrated historical fortification system that protected the medieval town and dates back to the 9th century, with a 3-mile fortified loop completed during the 14th century. The fortifications include towers, ramparts, citadels, bastions, forts, citadels, cisterns, and a castle and were included in UNESCO’s World Heritage Site list in 2017 as part of Venetian Works of Defense between the 15th and 17the centuries.

Hike up the 1,350 steps to the top of the walls to St. John’s Fortress (San Giovanni) which sits at 4,000 feet above sea level. Views from the top are astonishing with the Bay of Boka, Old Town, and the verdant hillsides that surround the city. At night the walls and ruins are especially enchanting when they are illuminated by lights and the facade of the fortress is beaming above the town.

Check out the Cats Museum of Kotor located by the Church of Saint Mary Collegiata in Wood Square, a tribute to the people of Kotor’s love for their felines, Montenegro’s cat capital. The city has always had a fascination with cats and they roam all over the city, the town has a noticeably high cat population. The museum exhibits photographs, prints, coins, postcards, antique books, stamps, and other memorabilia with a cat theme.

Take a boat ride around the Bay of Kotor, cruising on the turquoise waters is highly recommended, it is one of the most beautiful and breathtaking bays in the world. Boat tours are widely available at the Port of Kotor and many excursions will take passengers to Our Lady of the Rocks, a tiny historic islet nestled off the coast of Perast, built to honor the Virgin Mary. Legend has it that the locals made the island by sinking ships and throwing rocks in the water, there is a single church that stands on the island which includes a small museum.

Stop into premier Maritime Museum, located on the square of the Boka Navy in Old Town, Kotor. The museum is housed in an 18th-century palace with three stories and audio guides are explaining the museum’s collection which includes photographs, paintings, uniforms, weapons, coins, and model ships. Montenegro and Boka Kotorska have a proud and fascinating maritime history and the museum covers the periods from the founding of the Montenegrin Navy, from the 9th century until the end of World War II.

Visit Perast, the quaint postcard-perfect town on the coast is adorned with bougainvilleas lined streets, a scenic seaside town offering excellent restaurants, and an astounding 16 churches! 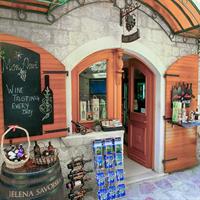 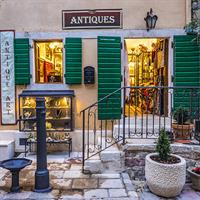 Shoppers are spoiled for choice when visiting Kotor, the charming narrow winding streets of Old Town are packed with unique boutiques, and cute shops filled with amazing handmade goods, and souvenirs. Old Town is where the majority of Kotor’s shops are located, many selling clothes made by Italian fashion designers, along with jewelry stores, antiques, books, and cat-themed stores.

The busy Kotor market is located across the harbor from Old Town selling vibrant fruits, vegetables, and fresh fish every morning (except Sunday). A large department store and other supermarkets are located in this vicinity.

Shops in Kotor are normally open Monday through Friday 9 am until 12 pm, and then open again from 1 pm to 9 pm, and from 8 am until 3 pm on Saturdays. 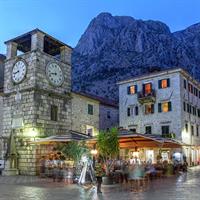 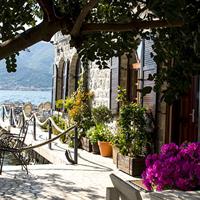 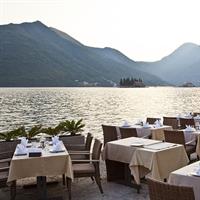 There is no shortage of fantastic restaurants spread throughout Kotor, inside the city walls in Old Town you'll find a wide selection of restaurants to choose from as well as outside the walls and in the charming towns dotted along the coastline. Many of the wonderful eateries in Kotor feature outdoor patios and seating to sit back, relax, and enjoy the warm, charming atmosphere of the town.

Seafood is a specialty in the region due to its proximity to the Bay of Kotor. Freshly caught fish and seafood, especially squid, octopus, and grilled fish are brought in daily by the local fishermen. Visitors can enjoy these fresh delights served up in popular sauces and recipes like buzara, which is a blend of olive oil, wine, garlic, and mild spices. Blitva, is a popular side dish made of boiled potatoes that are mixed with wilted Swiss chard and garlic.

Italian and Turkish cuisine is also very popular on the menu in Kotor, along with traditional Montenegrin cuisine, found in excellent restaurants such as Tanjga, right outside the city walls serving hearty dishes such as roast chicken and potatoes.

Cafes are dotted all around Kotor, with sweet smells wafting out of the doors and dishing up super-strong Turkish coffee and delicious sweet treats. Cafes offer outside seating and are a great place to sit back and people watch.

There are plenty of exciting nightlife options dotted around Kotor including restaurants, bars, cafes, and clubs to enjoy. The evenings in Kotor are just as charming as the day time, with alfresco dining, bars with outdoor seating, and spectacular views with an amazing ambiance. Eateries and bars along the port and bay looking out at the water can be all you need to relax for the evening. Shops, cafes, and restaurants are open late in Old Town and it is a pleasure to wander around at night and take in the historic surroundings.

If you are looking for a little more excitement head to Letrika, which is one of the best clubs in town to spend an amazing night dancing, listening to great music, and meeting people.

Budva is a hot destination for nightlife options, nicknamed the “Montenegrin Miami’ and known for its beautiful beaches dotted with hip bars and clubs boasting a vibrant nightlife. Podgorica is the capital city and also offers a buzzing nightlife scene, known to have some of the best nightlife to offer in Eastern Europe. There are open-air bars, pubs, fantastic clubs, and the underground venues on offer. 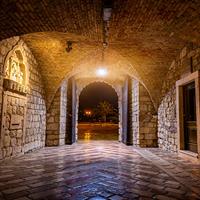 The city dates back to the time of Christ with documentation of Roman settlement called Catarum, it was settled by the Illyrians and has survived some of the most powerful regimes including Serbs, Venetians, Russians, French Napoleon Forces, Austrians, Tito’s, and Yugoslavia, and finally the break off from Serbia. The city is filled with historic buildings and walled infrastructure dating to Venetian rule from the 13th-17the centuries. The Port of Kotor is the strategic port of the city located inside the beautiful Bay of Kotor, which provided shelter for the fleets, and was a second port due to the narrow strait to pass. The city survived four earthquakes but not without some pretty extensive damage. The city is a UNESCO World Heritage Site. 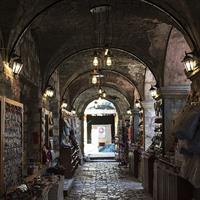 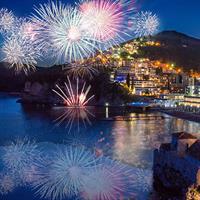 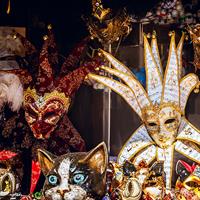 Kotor is packed with festivals throughout the year including the 500-year-old Summer Carnival, a week-long celebration with different events held in the city square and nearby villages, costume balls, concerts, local food, drink, theatre plays, and a massive carnival procession on the main road through Old Town, followed by fireworks. Usually held from the end of summer middle to the end of August.

Don Branko’s Days of Music is held during July and August with over 100 programs organized in different locations throughout Kotor, on the streets, squares, churches, and music hall. Concerts are featuring classical music, ballet performances, a choir, symphonic orchestra, and well know soloists from Montenegro.

Kotor’s festival of theatre for children is held annually at the beginning of July since 1993. Keys are presented to the children of the city and for 10 days the celebrations are all about the children. There are different events held daily on the streets and squares of the city to develop and promote theatre art and plays.

The International festival of klapa singing is a special kind of performance held in Perast which was founded 17 years ago. It preserves and promotes acapella singing as part of the Montenegrin tradition, held every June with many events on offer such as art shows and concerts.

St Tryphon days are held annually at the end of January and beginning of February since the 9th century to honor the patron of Kotor. The festivities include concerts, church choirs, dance performances, plays, and cultural events. There is a long mass held in the Cathedral of St Tryphon, afterward Boka navy members in uniform perform traditional dances in front of the cathedral, and the city marching band plays.